BTC Technical Analysis: The New Target Is at the Mark of $78,000

Last trading week on the BTC market was completely under buyers' control. All attempts by sellers to start a correction near historical highs failed. It seems that big players have decided to thoroughly buy Bitcoin in a specific liquidity zone and expect a sharp BTC price growth. After closing the weekly candle on 27 September, by absorbing the previous candle of sellers, buyers managed to realize their advantage and get closer to the mark of $58,253. Around this point, sellers began a deep correction of the cryptocurrency market in May. Despite the trading volumes, which are now significantly lower than during the growth in April and May - sellers are quite exhausted. 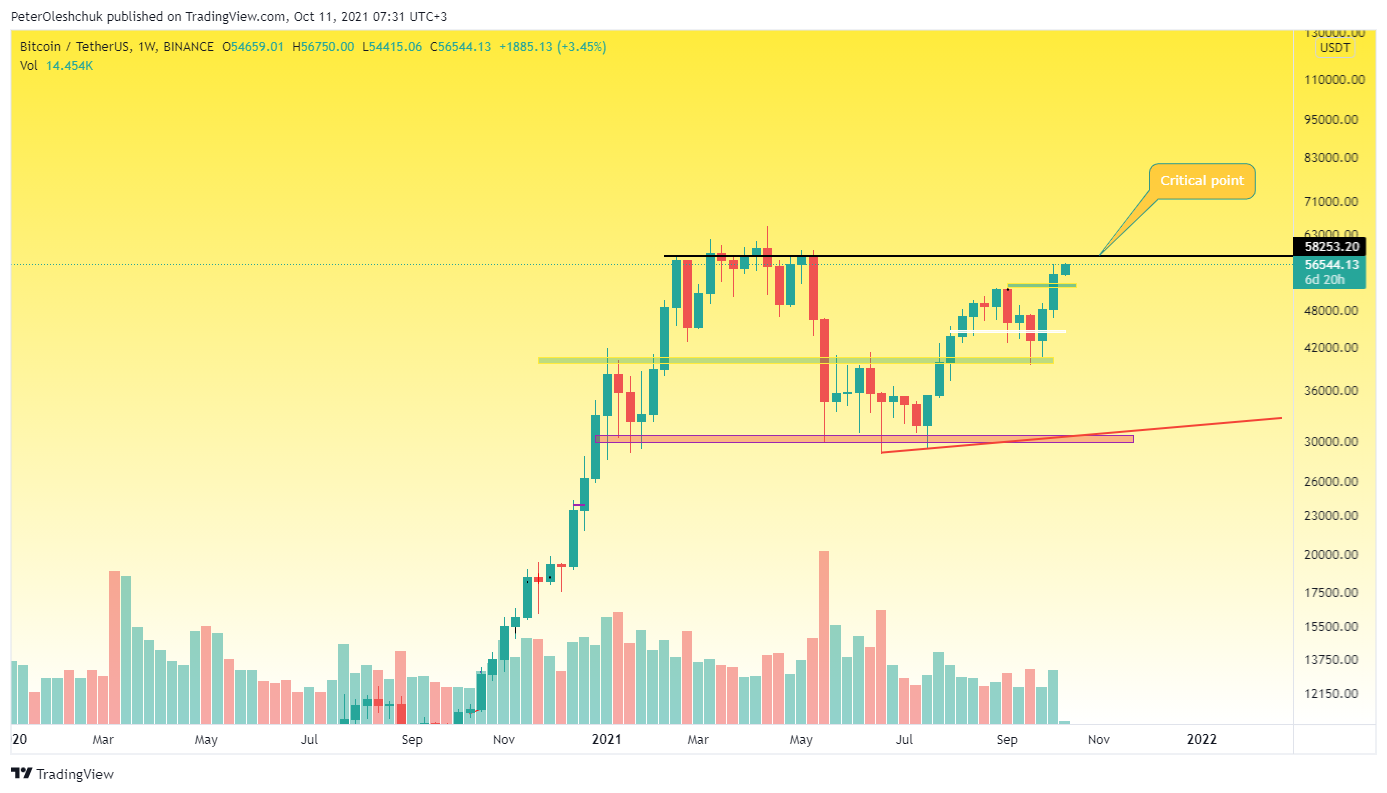 Therefore, the probability of continued BTC price growth and the historical high update has increased significantly. If there is no unpleasant surprise in the range of $58,253 in the form of a new sharp fall wave, the next global target of buyers will be around $90,000. This positive scenario will finally be confirmed if buyers take the $78,000 range without any problems due to the new growth impulse. In fact, this range may be a potential upper limit of the global consolidation range of $30,000-$78,000. In this case, the Bitcoin market may continue to move in this range until the end of 2022. 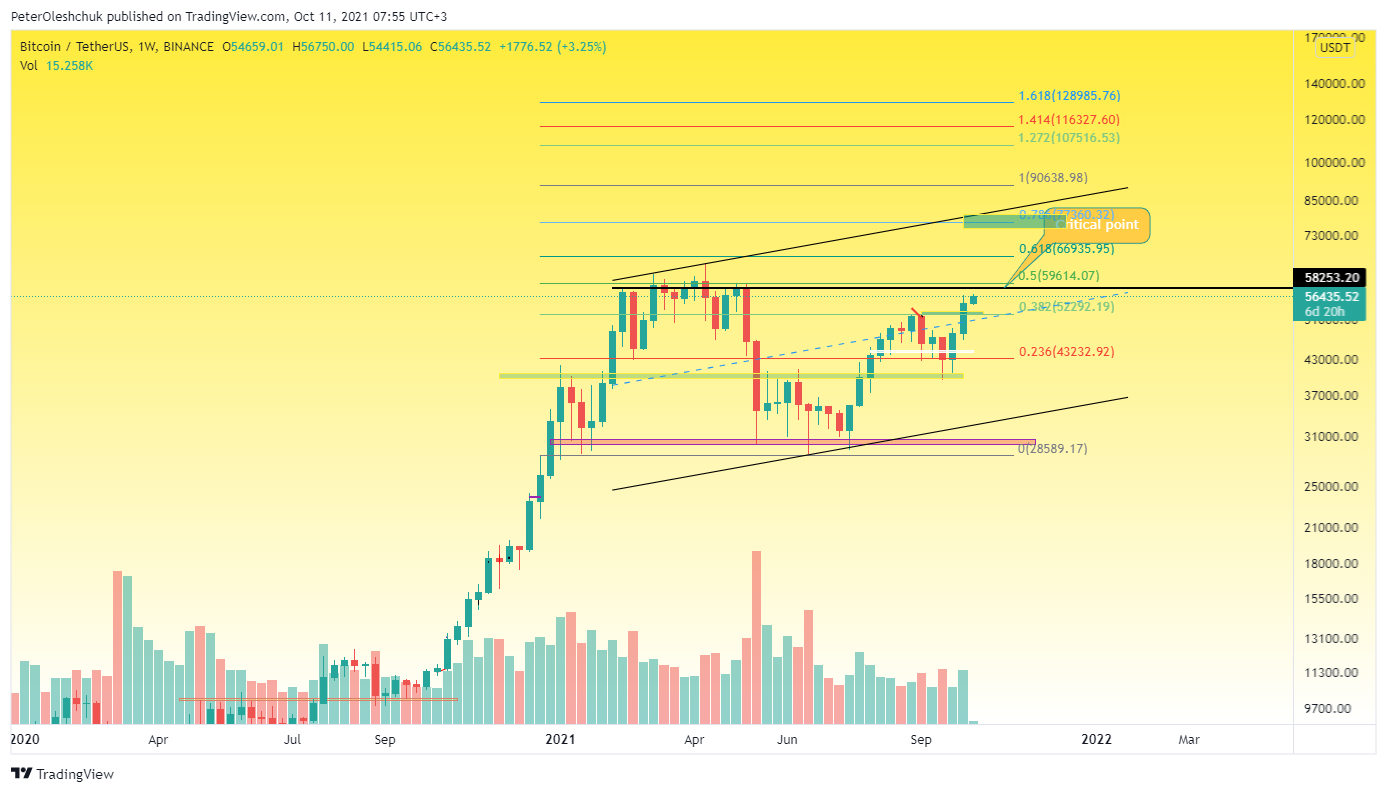 If we analyze the BTC price movement on the daily timeframe, the main achievement of buyers over the past week was taking control of the range of $52,000-$52,800. On 6-7 September, a local correction took place in this range, which affected the entire crypto market. The breakdown of this range up took place at low volumes, which called into question the strength of buyers. However, after this fact, for a whole week, buyers kept the price above this range, not allowing the price to even touch it. This confidence of buyers hints at the end of the global Bitcoin correction, which began in May 2021. Thus, the mark of $78,000 is well suited to the role of the next target of buyers. 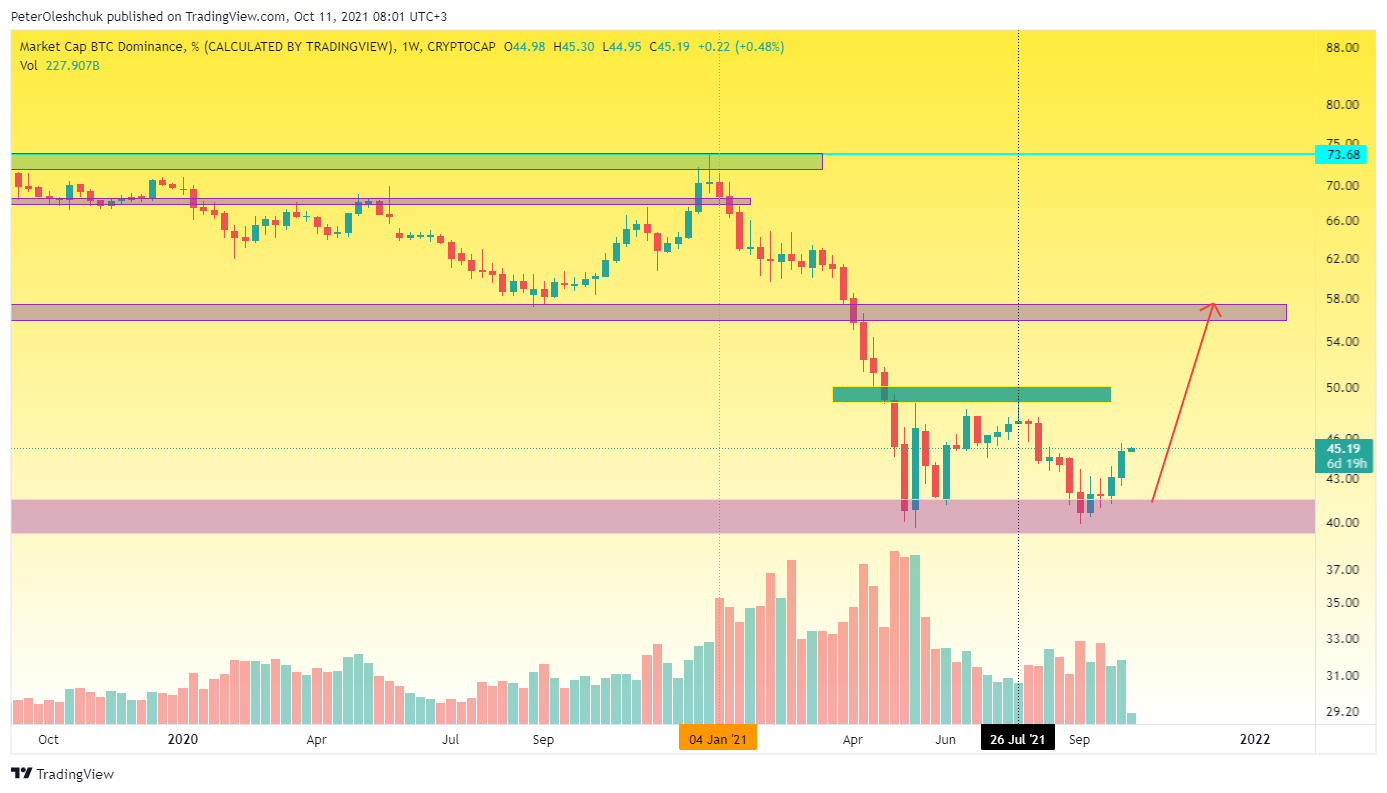 The future positive dynamics of the Bitcoin market are also hinted at by the chart of its dominance. The weekly timeframe shows that after a long trend of BTC falling, the cryptocurrency market situation is beginning to change with confidence. The global target is to increase Bitcoin dominance to 58%.

During this time, the altcoin market will be quite difficult. It is already noticeable that the BTC growth has not had a positive effect on the market of other cryptocurrencies. Even the strongest projects do not have the resources to continue to grow. Capital is gradually transitioning to Bitcoin. From the local perspective, this will cause depression in investors. Though, in case of a confident BTC price growth and keeping its price above the previous historical high, it will be the turn of altcoins to grow.