The global economy now is more likely in a precarious position than in 2017 due to the post-Covid situation. With impressions of Bitcoin hitting $20k in the past, the chances of hitting $20k in 2020 have increased by 7% is what the echoes said.

But are the reasons for the 2017 BTC bullish sentiment the same as that of 2020? The historic price run seems to be revisited in 2020 with different reasons altogether. On one hand, in 2017 the results were said to be the ingenious hype, irrespective of the odds of that time. Powerful countries like China, Russia, Thailand, etc. simply resist taking Bitcoin under consideration. With only Japan legalizing Bitcoin could be favorable news for Bitcoin in 2017. While in 2020 the reasons could be completely different.

What's in News for Bitcoin

Billionaire Mike Novogratz predicts that Bitcoin will soon hit $65,000, which caught the attention of prominent names like Maisie Williams, Elon Musk, Barry Silbert, and many others. On which the Game of Thrones star Maisie Williams jumps onto Twitter asking whether she should invest in Bitcoin or not? For which he compared that the price will hit more because of the ‘network effect.’ BTC hitting $20k can be considered as “peanuts” in front of it, as it has the capability to rally past the previous record level. 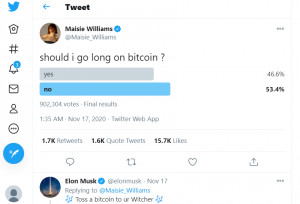 Acceptance and adoption of BTC have increased over these years. Besides, a well-known digital currency exchange Coinbase had reported that 100,000 new users join them every day, making the number 11.9 million in 2017. In 2020, the stats showed that over a 35 million people joined them marking a presence from over 100 countries throughout the world.

These could be the prominent reasons for the BTC hike in the coming months, along with many others. Bitcoin market cap reported as 18,325 USD at the time of writing.

For sure, now people are considering investments in Bitcoin as a safer option which could be the result of the significant reason for the acceptance of cryptocurrencies all across the world. But the grounds of acceptance will again be the question for most of the enthusiasts. Let’s answer this for you. FOMO can be the foremost reason in everyone’s mind to invest in the crypto world. Whether it is Bitcoin or any other cryptocurrency.

During the pandemic, every investor is looking for a stable investment. The market nowadays is comparing investment in gold and Bitcoin, which itself explains the stability it offers to investors. People fear to miss out on the chance of getting more money in their pocket when everybody is fighting the virus. Also, it can be observed that now the percentage of people getting aware of such alternatives has increased tremendously.

Is This Bitcoin Bull Run has Real Staying Power?

From the eye of analysts, Bitcoin’s bullish behavior will set the baseline this time. As one can easily examine the pattern which is rather striking than parabolic. As parabolic curves tend to come back to the same base again, analysts take non-parabolic curves as benchmarks of the future. In 2020, the curves are non-parabolic.

Take a look at the years 2017 and 2020. In the month of November, you can clearly mark the generous hike in 2017 that won’t last long [is parabolic]. While in 2020, one can examine the consistency of the raise in BTC market cap. 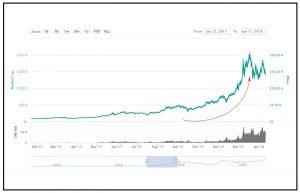 2017 Parabolic nature of the graph[/caption] 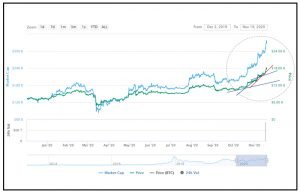 2020: Non-Parabolic nature of the graph[/caption]

Still, developing countries like India are struggling to give cryptocurrencies all the acceptance an investor needs. Bitcoin has all the potential to be accepted as a verified mode of payment in India. But the government does not seem to be on terms with it.

For sure this raise in the value of BTC will hit in 2020. But it will be interesting to see for how long? Will it be like the $20k level in 2017, where the hike was only for 29 minutes or it will revisit the history in another way!