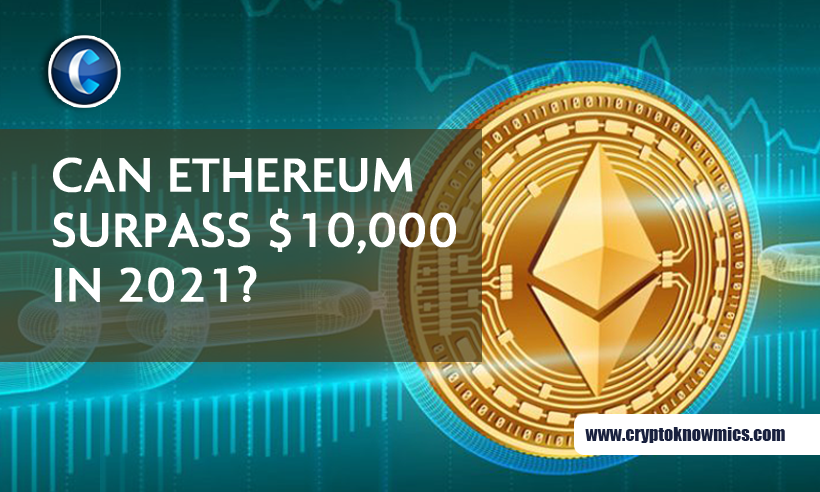 Therefore, looking at all these great numbers one can surely assert that there is so much more to expect from the largest altcoin. On May 4, 20201, Ethereum hit an all-time high of $3,523, as per CoinMarketCap. Indeed, some cryptocurrency analysts believe Ethereum has so much potential that it has “every chance” of hitting $10,000 this year, representing a more than the four-fold rise in its current value.

Possibilities of Ethereum Hitting the $10,000 Mark

One of the top crypto experts, Bobby Ullery, predicts Ethereum (ETH) will trade at $11,375 by the end of 2021. His bullish prediction is backed up by David Grider, a strategist for Fundstrat Global Advisors LLC, who believes “Ethereum is the greatest risk/reward investment play in crypto.”

The above opinions are based on the various functions Ethereum performs, such as determining the entire price of a digital commodity without relying on its novel token “ether” or a single protocol on its network. After touching new highs in the first week of May 2021, David Grider expects Ethereum can surely pass the $10,500 level by the end of the year.

Additionally, FundStrat published a research note setting a price target for Ethereum above $10,000 by the end of this year. FundStrat is bullish on ETH as the new financial applications are built on the Ethereum network, which has expanded dramatically in size over the last year. The research note reads:

“The crypto narrative is shifting from bitcoin to Ethereum and other segments like DeFi (decentralized finance) and Web 3.0 apps. In crypto accounting terms, this is the same as a company using revenue, less operating costs, and earning a profit that is used to buy back stock. This means the network would become profitable like a company once ETH supply reduction from burned fees outpaces inflation.”

On Friday, March 5, 2021, Ethereum’s developers approved a major adjustment to the network’s operation that will take effect in the summer.

EIP-1559 update will introduce major fundamental changes in the Ethereum Network. The main goal is to overhaul the way transactions operate to help with the existing supply of Ether being restricted.

When a base transaction fee is sent to the network, Ether coins are lost in this process. Destroying coins would eventually result in a decrease in production. This kind of news has been well-received by the investment community because experts believe Bitcoin is more valued than other altcoins. After all, it is relatively scarce. However, Ethereum is considered more energy-efficient than Bitcoin, consuming three-times less energy than bitcoin.

Perhaps Ethereum is copying Bitcoin’s strategy to see the digital asset’s price soar and surpass the parent cryptocurrency not just in terms of price but also in terms of market capitalization.

“The proposed improvements to the Ethereum network would not only make the blockchain more eco-friendly in terms of making transactions successful, but it will also make it more scalable.”

Since customers are willing to pay for a coin at the price the holder is willing to sell, a decrease in the supply of valuable crypto assets usually results in a price increase. This introduces demand and supply policies resulting in new price trends in Ethereum.

Ethereum’s recent price surge is breaking multiple records. This adds more support to the point that the $10,000 mark won’t be very hard to achieve.

According to a study released by Arcane Research, Ethereum’s recent growth is largely attributed to the shrinking market share of Bitcoin to under 50%, as investors become more greedy and actively speculative. In the cryptocurrency space, this phenomenon is known as “alt-season,” in which smaller ventures gain value faster than Bitcoin, sending speculators into a frenzy.

Due to the onset of the Altseason, Bitcoin’s market dominance has also fallen immensely. At the beginning of the year it was 71%, and today it has come down to 45%. The main reason behind this is Altcoins like Ethereum, Dogecoin, and Binance Coin. According to Arcane Research, the increasing interest in decentralized financial services (DeFi), which are largely focused on the Ethereum network, has also aided the network’s token value increase.

The latest Ether rally is more speculative than previous ones, and open interest in futures contracts is equal to 2.6% of the coin’s market cap, which may lead to increased volatility.

Apart from this, investments in Ethereum have also increased. Many institutional investors have taken an interest in Ethereum, including Grayscale, which added $38 million in ETH in February. Since its last hit at its new ATH in February, the number of Ethereum wallet holders has not decreased but rather increased.

Then, Galaxy Digital, a digital asset merchant bank, opened an Ethereum fund for institutional investors and businesses looking to invest in Ether without purchasing or owning any of the underlying assets. This product, known as the “Galaxy Institutional Ethereum Fund,” debuted on February 19 and has raised $32 million as of March.

The year has really built momentum for the cryptocurrency market amid growing crypto adoption. While Bitcoin struggles to surpass the psychological level of $60,000, Ethereum is sure to seize some percentage share of the crypto market. Thus, the Ethereum price can undoubtedly set a rally above the $10,000 mark, as per the data and metrics.