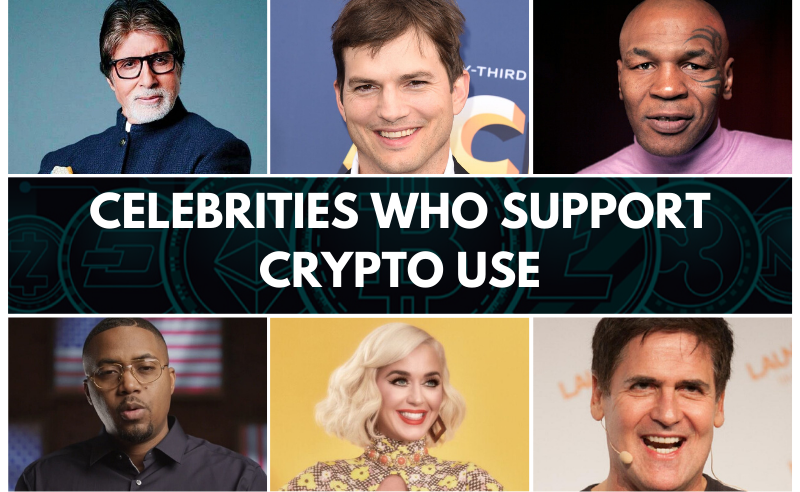 Celebrities Who Support Cryptocurrency Use

In the contemporary financial world, cryptocurrency has set a new milestone in the form of digital money. Even though it is volatile, still, it has been successful in gaining the trust and admiration of people from all over the world. If you follow Bitcoin news today, then you must be getting all the latest updates and the recent developments that are taking place in the crypto world. Today, this new monetary alternative has gained a lot much support from the different fields of celebrities, whom we are familiar with. You must have noticed these celebrities appearing on advertisements and endorsing some product or any technology to drag the attention of their fans and prompting them to buy it. But now apart from products, they have initiated their support for the use of cryptocurrencies. So we are bringing you some popular names who support cryptocurrency use.

We all are aware of this fact that these celebrities are no lesser than demi-gods. Well, it’s all that love showered to them from their fans. They have a ‘Midas touch’ in terms of promoting or endorsing a product and making it popular for their million fan followers. So just imagine, how much impact will they make by supporting the use of cryptocurrencies like Bitcoin or any other. No doubt, this will surely make their fans convinced about its importance and use. Why, because they have stamped their support for it. Now if you are curious enough to know about who are these celebrities. Then here are they:

This name is very much popular not only in India but worldwide. No matter how many new props of actors you see in contemporary cinema, but no one can replace Amitabh Bacchan. He is also known as Big B of Bollywood. This tall, vibrant, and baritone-voiced actor is among those celebrities who support cryptocurrency use. According to sources, the actor with his son, Abhishek Bacchan has invested a full quarter in cryptocurrency, Bitcoin, in 2015 to a Meridian Tech Pte in Singapore. The stocks of the company grew higher and his investment increased from $250K to $17.5 million.

Joining the list of celebrities who support cryptocurrency use is a famous Hollywood actor, Ashton Kutcher. The ‘JOBS’ actor, has not only supported the use of Bitcoin cryptocurrency, vocally but has even co-founded A-Grade Investments. It is mainly an investment fund that is aimed at funding BitPay, a well-known crypto exchange. No doubt, we all are a diehard fan of his good looks and his acting prowess. But little do you know the fact that Kutcher himself is a big fan of blockchain technology and is also a huge tech investor.

Mike Tyson is a big name in the field of sports. The boxing legend is also supportive of the cryptocurrency use. Mike has even started the development of ‘The Mike Tyson Bitcoin ATM’. These ATMs are special enough in exchanging any regular currency into Bitcoin in a few seconds. Mike feels very thrilled to experience the Bitcoin revolution. The legendary boxer has even said that cryptocurrency is the future financial technology, the more he came to know about it, the more he became fascinated by it.

Coming on to another celebrity, is US Rapper, Nas. The hip-hop American artist also joins the list for supporting cryptocurrency use. Around $25 million of investment in Coinbase has been done by this American rapper. Besides this, more than 400 startups have been backed by Nas. Coinbase is a worldwide Bitcoin exchange, which every crypto lover should be knowing. After getting content with his investment in 40 startup ventures, he stated about his continuous activity in blockchain and cryptocurrency zone. The American rapper, Nas, also think about Bitcoin to be a new uprising financial technology.

Mark Cuban is a well-known name among the panellists in popular ‘’Shark Tank’’. This American entrepreneur became a billionaire when he made Bitcoin as a source of investment. Mark, being one of the top richest Bitcoin owners, has given smart advice for all those newbies willing to invest in Bitcoin. He says that a person must only invest in cryptocurrency until he is sure about spared money.

Another Hollywood icon, who supports cryptocurrency use is Katy Perry. This beautiful, TV star and songwriter has poured her love for digital currencies to her million fan followers on social media. She had her nails painted in cryptocurrency, indicating her fondness for the technology.

So we hope you must have enjoyed reading this blog which involved your favourite personalities. The main objective of this blog is to make you familiar with the celebrities who support cryptocurrency use. As you know, these dignified personalities have such an appealing quality that prompts their fans to believe what is being said by them. If they endorse any product, it is pretty much sure, that fans would certainly buy that product. So when these celebs become supportive of cryptocurrencies, and even uses them, naturally, it will encourage their fans to adopt it too. The success of cryptocurrency can be measured by such examples.