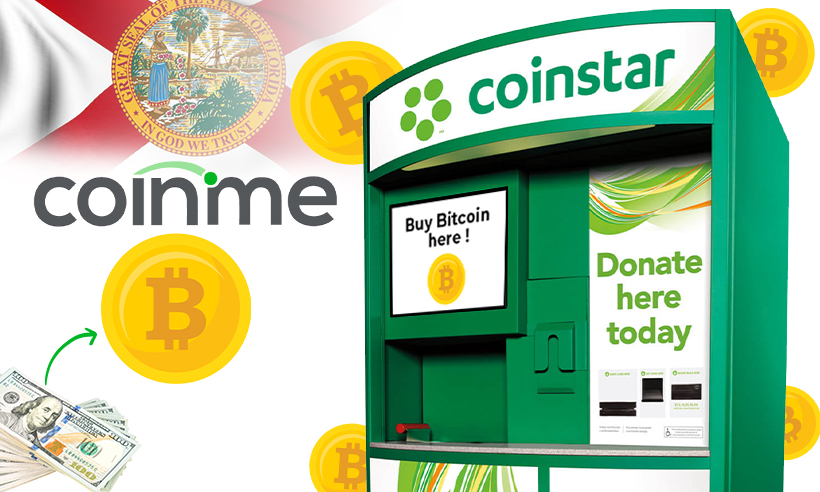 Coinme announced on Wednesday the expansion of its Bitcoin ATMs in the state of Florida with the installation of more than 300 Bitcoin-enabled Coinstar kiosks.

The US-based Bitcoin ATM operator, aim of the company was to bring Bitcoin purchasing facilities to the local groceries of the Florida residents. The Bitcoin cash machines have been strategically installed inside grocery chains like Winn Dixie, Fresco y Mas, and Harveys across small towns and big cities.

Coinme Co-Founder and CEO, Neil Bergquist said, “Our team has been working with state regulators in an effort to launch Coinme on Coinstar kiosks throughout the state, and we are thrilled to secure a license to offer a cash onramp to purchase bitcoin for the residents of Florida.”

“Through our partnership, we’re able to continue to expand into new areas to meet the ever-growing demand of accessible avenues to purchasing digital currencies,” he added.

A Perfect Time for Expansion for Bitcoin ATMs by Coinme

Coinme is one of the major Bitcoin ATM operators in the United States with around 6,000 Coinstar kiosks installed in supermarkets across 45 states.

The company is expanding its operations at a time when retail demand for cryptocurrencies is skyrocketing. Bitcoin recently experienced another wave touching almost the $60,000 mark after bullish rallies in recent months.

Despite the demand, Bitcoin ATM adaptation remains on the lower side. Though these kiosks make the transaction easy, the fee charged by the companies remains much higher than what is charged by the exchanges. According to Survey, it is found that 23 percent of the participants would prefer purchasing cryptos using an ATM.

Jim Gaherity, CEO of Coinstar said that “The current mainstream demand for bitcoin has attracted many first-time investors who need straightforward and secure access to cash avenues to purchase it.”