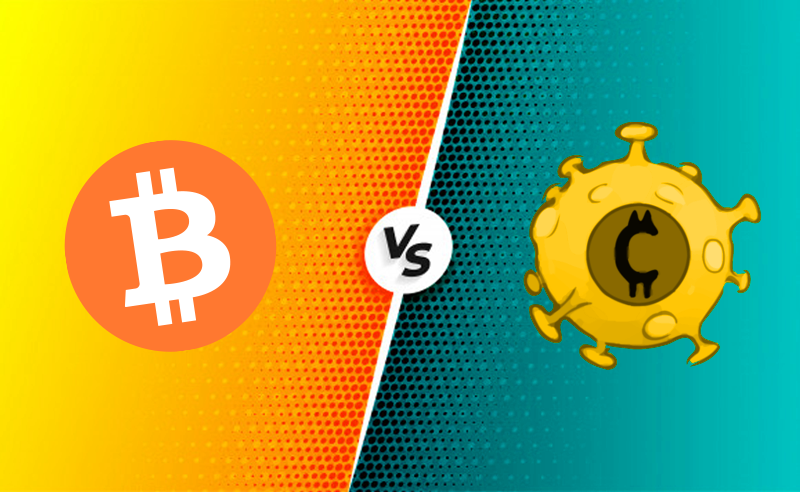 Corona Coin vs Bitcoin: Which of These Two Will Prevail Ultimately?

Cryptocurrencies have shown lots of improvement since the time they started their journey. They have changed the way people do transactions nowadays. Bitcoin was the first cryptocurrency that came into the market, and it started gaining traction very soon. This year, the world of cryptocurrencies has seen the rise of a new coin, called Corona coin. It has started competing with other major cryptocurrencies in the market. In this article, we will discuss on Corona coin vs Bitcoin and examine which of the two will prevail at last.

Bitcoin has so far been recognized as one of the greatest cryptocurrencies in the market. People are always in the look of Bitcoin because it has given explosive benefits in the past years. Most of the time, these profits were much more when compared to gains made by other traditional trading instruments like stocks, gold etc. It also managed to survive during the time of recession which occurred somewhere around 2008. After that, Bitcoin saw a tremendous rise in its value, going up to $10000 at the beginning of 2020.

The asset is also considered to be a safe-haven and digital gold. Such standings have been offered to this cryptocurrency because it performed well compared to other digital assets. In addition to this, due to its decentralized nature, Bitcoin possesses the potential of not to be affected by ups and downs of the market. During the time when COVID-19 started the journey, Bitcoin reached half of its value, but after some days, it recovered and started rising again. Observing this, we can easily reason out that Bitcoin can be immune to the financial crisis at its best.

It is a newly launched crypto that bets on the number of deaths caused by the Coronavirus. A development team from Europe started creating this coin amidst the outbreak. Corona coin allows one to make money based on the number of infections and deaths by the virus across the globe. The amount of Corona coin tokens would lower if the number of deaths increased due to the infection. Its creators have fixed the total supply up to 7 billion. The number is taken from the total population of the world at the time of minting. Besides this, scarcity in the number of tokens will result in an increased price. Currently, Corona coin can be bought from Saturn crypto exchange platform. Moreover, Corona coin is a deflationary digital asset because other people cannot mint it. The currency works on the Proof of Death consensus mechanism, which is taking the crypto world in the wrong direction.

When compared to Bitcoin, this digital asset does not seem to hold any future as it is not providing any real benefit to people. Also, its tokens get burned every two days as per the number of deaths during that duration, which is similar to betting on deaths every two days.

The outbreak has severely disturbed all the industries across the globe. During the time when traditional markets were in chaos, Bitcoin managed to perform well. In their way to face the current economic situation, almost all the banks have lowered the interest rates. The stock market has also gone down. People who invested in the capitals are now looking to go for a safe haven like Bitcoin. Bitcoin lost half of its value and went from $10000 to $4000 previously. As of now, it has again reached up to 7000 US dollars. Besides this, the halving event is approaching this May, which will increase its value further. One primary reason Bitcoin successfully recovered at such a fast pace was that it showed no dependency on how banks and other financial institutions control the assets. Bitcoin lacks any central authority that takes control.

Thus, in our journey to ‘Corona coin vs Bitcoin’, we have clearly seen some signs which indicate how Bitcoin would certainly outlast in the future, while Corona coin is just short-lived crypto. Many things about Corona coin are not yet clear. So, this crypto does not stand any chance against Bitcoin. On the other side, Bitcoin has never been criticized when compared to this new cryptocurrency. It has a bright future and a great deal of adoption. Bitcoin will always remain an all-time favourite among people all around the world.