Could the US Dollar Soon Collapse and Fail as a Currency?

Ever since the economist Stephen Roach made the statement of a possible US dollar collapse by the end of 2021. It shocked not only the investors but the public as well. And every second person is now seeking “could the US dollar actually collapse?”

Undoubtedly, the statement has turned on a very interesting argy-bargy on why it will or why it will not? So, let’s examine what causes a currency to collapse. And, how countries could come out of this terrible crisis.

Why Does a Currency Collapse?

The root cause of the collapse of any currency is the lack of trust in it. And the very basis of faith in any currency is its use and stability. That serves as the effective store of value for money.

To put it in simple terms, when people stop believing in the currency, it loses its value. But, it is not simply because you and I start believing in the loss of its value, or our government starts believing that way, and everybody then stops using it. 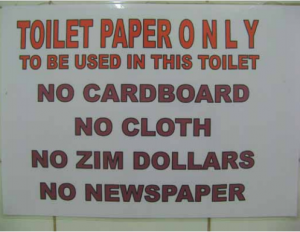 The reasons for hyperinflation were completely different for these countries, and so do the ways they get over the crisis.

The above picture shows the time when Zimbabwe’s hyperinflation led to the devaluation of its national currency, and people thought of using banknotes instead of buying toilet paper.

Basis of the US Dollar Collapse?

The basis of the collapse of any currency is fundamentally due to its weakness. In the case of the US dollar, the chief reason for weakness is that it is only valuable because the government maintains its value. This simply means that if the government decides not to maintain the value of the given currency, it will not be suitable for exchange.

Since, there are no regulations like commodity-based currencies, [that are backed by a commodity such as gold], the government may lead to false practices, [for e.g. printing too much money] in the future.

Also, if foreign investors sense false practices, then the government may switch away from the US dollar, which might significantly affect the people holding assets denominated in the US dollar.

Another reason that can lead to the weakness of the US dollar is the demand for the currency. According to the statistics, the value of the US dollar is 90.19. Which has depreciated nearly 12% in less than a year. And this depreciation in the U.S. Dollar Index shows that the relative strength of the dollar will go down around the world. 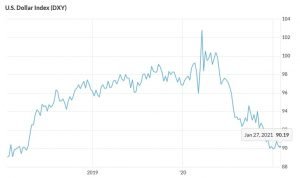 To summarize, a currency can collapse only when its value plunges. And people, who hold dollar-denominated assets, may panic and sell them in this scenario. At any point, when the crash occurs, there will be a rise in the demand for the assets having valued more than the US dollar.

To put it simply, the failure of the US dollar as a currency simply means everybody will try to sell their dollar-denominated assets.

Circumstances Under Which the US Dollar Could Collapse

There are enough compelling reasons that can lead to the US dollar collapse. Out of all macroeconomic factors, hyperinflation and high-debt are a double-edged sword for the U.S. economy.

The national debt level of any country is the measure of how much the government owes its creditors. As of 22 Jan 2021, the national debt of the U.S. is 27.8 trillion and still rising. If the hyperinflation and high-debt move against the U.S. economy, then there is a high possibility that the economy will go under depression. And, the US government will struggle to manage interest payments. Which may lead to the devaluation of the US dollar by the foreign creditors.

Other factors could be big economies like China and post-European Union Germany to resist the standard and monopolize the reserve currency space. Doing so, the value of the US dollar will naturally come down and will fail as a currency.

Alternatives of the US Dollar?

It is the rule of nature, that when we have something more stable to rely upon, only then we can think of replacing the previous one. In the case of the US dollar, the most generous question that first comes to our mind is - if it is not the US dollar, then what? Yes, the alternative will replace the US dollar if it fails as a currency.

If we talk about other famous potential currencies then the first one to come to mind is the Euro. But there are two major problems in replacing the USD with the Euro.

In case if the US dollar goes down, crypto-space can prove to be a sure shot solution to the crisis. And the benefits of choosing digital-currencies over fiat are

Ideally, it is hard to believe that the collapse of currency like the US dollar will happen, it is based on practical statistics that the value of the dollar is going down in the foreign exchange market. The latest statement from Stephen Samuel Roach, an American economist, says that the US dollar will collapse, and we can expect 50% of the double recession by the end of 2021.

He predicted that based on the historical evidence, in eight of the 11 business cycles, the economic output will briefly rise and then fall, and this will continue in and out. He mentioned that the dollar is not immune to time-honored adjustment.

In the scenario of the dollar collapse, crypto-assets can be a real savior because of the advantage of not being in the control of any central authority. Also, if we consider any other fiat in place of USD, then also, the chances are likely to fail, because anyway both of them are currencies, and no-one can guarantee for not collapsing in the future.