After Compound and Aave, another DeFi protocol Synthetix experienced a surge in its total value locked (TVL) and reached $1 billion.

As per the report, the year 2020, has been a bit favourable for the DeFi protocol because this year, the value of many DeFi tokens have increased. Synthetix (SNX) is one of those tokens which has experienced growth in its value.

The report further states that on August 15, the value of SNX reached an all-time high of $7.32 and it rallied more than 400 percent year-to-date. 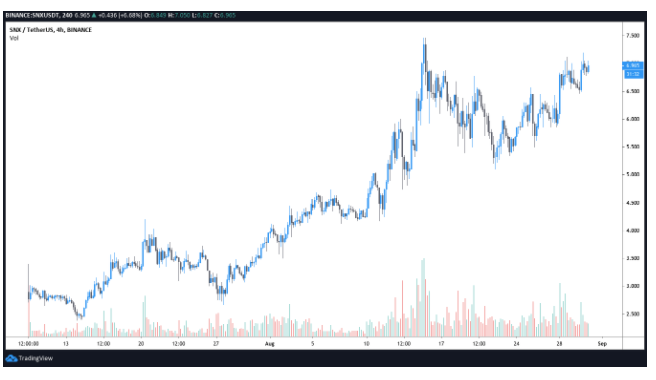 This present year is considered to be an altcoin season because of their increasing value in the market. Basically, this season revolves around lending, liquidity and yield farming within the crypto.

It is to be noted that although Synthetix is a part of DeFi sector, still it is able to fulfil its own purpose by providing a channel which could lead the crypto investors to the world of traditional finance.

Although Synthetix is an Ethereum-based decentralized exchange, it does not allow the investors to trade between tokens and stablecoins.

Notably, synthetic assets or ‘Synths’ are the only tokens that could be traded on this exchange.

Synth tokens, which could be traded on the Synthetix platform, could also be developed on the same platform. These tokens have the ability to inversely trace the price of assets like iUSD, iETH, iXAU, etc.

The Ethereum-based decentralized exchange uses other assets as the collateral in order to develop a new Synth token.

The report indicated that despite using USDT or wBTC or any other established asset the platform uses its own SNX token for developing the Synth token.