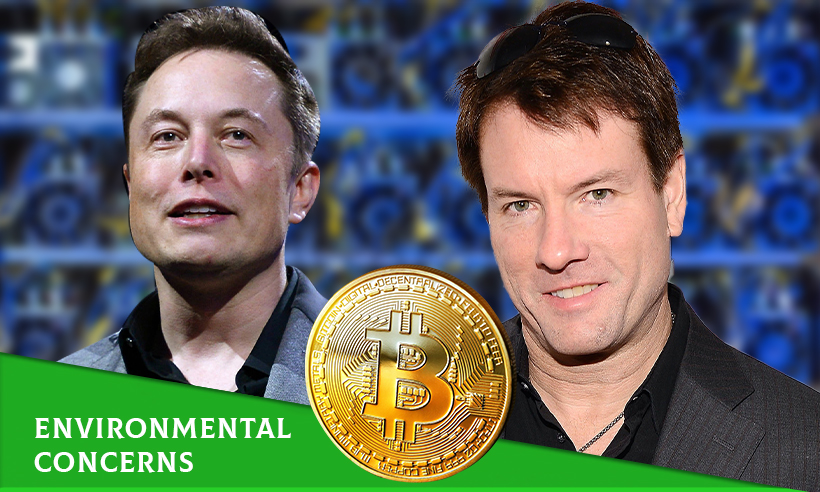 Elon Musk has joined a conversation among leading Bitcoin miners, hosted by Michael Saylor, to address environmental concerns of Bitcoin mining, according to a tweet from the Tesla CEO on Monday.

After a little more than two weeks, Tesla +4.4% Elon Musk, sparked the cryptocurrency and Bitcoin price drop by declaring that the electric car maker would no longer accept Bitcoin as payment for its electric cars, citing environmental concerns.

The devious billionaire then tweeted that he met with executives of North American Bitcoin Mining firms. The meeting culminated in the formation of the Bitcoin Mining Council, which is dedicated to fostering the adoption of sustainable blockchain mining initiatives.

Spoke with North American Bitcoin miners. They committed to publish current & planned renewable usage & to ask miners WW to do so. Potentially promising.

Simultaneously, and in what seemed to be a coordinated step, Michael Saylor, CEO of the largest corporate holder of Bitcoin (Tesla is #2), the business analytics firm MicroStrategy MSTR +4.9%, revealed he had hosted a meeting between Elon Musk and executives from major bitcoin miners in North America, including Argo Blockchain, Blockcap, Core Scientific, Galaxy Digital, HIVE Blockchain, and others.

Yesterday I was pleased to host a meeting between @elonmusk & the leading Bitcoin miners in North America. The miners have agreed to form the Bitcoin Mining Council to promote energy usage transparency & accelerate sustainability initiatives worldwide. https://t.co/EHgLZ9zvDK

Next Steps Described As “Potentially Promising” By Elon Musk

“The recently created Bitcoin Mining Council is the next logical step in promoting a sectoral transition to green energy,” said Argo Blockchain CEO Peter Wall in a written statement to Forbes.

Wall writes that he “looks forward to partnering with Michael Saylor and other leading North American miners to future-proof an industry that must collectively develop safe mining practices and take ESG issues seriously.”

Marathon Digital Holdings and Hut 8 Mining reported their attendance and the group’s goals in tweets. Other Council members were not immediately available for comment.

The announcement follows an increasing focus on cryptocurrency mining operations around the world. Aside from a greater emphasis on the environmental effects of bitcoin mining, the sector is also facing an intensifying ban by Chinese authorities on bitcoin mining and trading practices.

According to reports published in the peer-reviewed journal Nature Communications, these dynamics have the ability to significantly affect the delivery and operations of the bitcoin mining landscape, where China accounted for more than 75% of the overall computing capacity on the network as of April 2020. China’s crypto mining superiority is primarily due to lower energy costs and larger mining farms.