Tesla and Space X’s CEO Elon Musk has changed his Twitter bio today for Bitcoin. Musk, who was recently announced as the world’s richest person, has taken to Twitter and wrote “#bitcoin” under his name. And that is all his bio has to say at the moment. After this activity, Bitcoin’s price has surged by $5,000, rising from $32,000 to $37,000 in half an hour.

With this, we can expect that his more than 43 million followers on Twitter could be now interested to learn more about the world’s largest cryptocurrency. 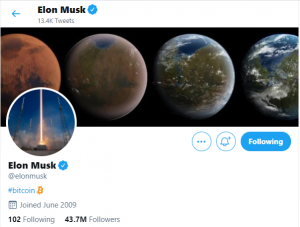 This is not the first time we are seeing Elon Musk showing support for Bitcoin. He has appreciated cryptocurrencies, especially Bitcoin, multiple times in the past. He had earlier posted tweets voicing his support for the first-ever cryptocurrency, saying, “Bitcoin is my safe word.”

Soon after changing his bio, Musk also tweeted: “In retrospect, it was inevitable.” This can be a hint towards the Bitcoin mention saying that Bitcoin was quite certain to come into the picture.

In December 2020 Musk inquired about converting large transactions of Tesla’s balance sheet into Bitcoin. He was quoted saying: