EOS Technical Analysis: Investors Should Be Prepared for a 30% Price Fall

The last trading month on the EOS market was not entirely effective for investors. A new growth wave after the triumphant price collapse by sellers in May was quite sluggish. Low trading volumes during the local growth wave since late July have called into question the serious intentions of buyers. Of course, during the Bitcoin fall on 7 September, the entire crypto market was in trouble.

However, the EOS market fell into the main critical zone, where the local growth wave began. Bitcoin, for example, is in the range of $40,000-$44,000. Such a sharp EOS price fall indicates its weakness. Continuation of the BTC price correction will provoke an update of the EOS price and a $2.5 critical point test. It is in this mark that the global trend line runs, which is perfectly visible in the weekly timeframe. 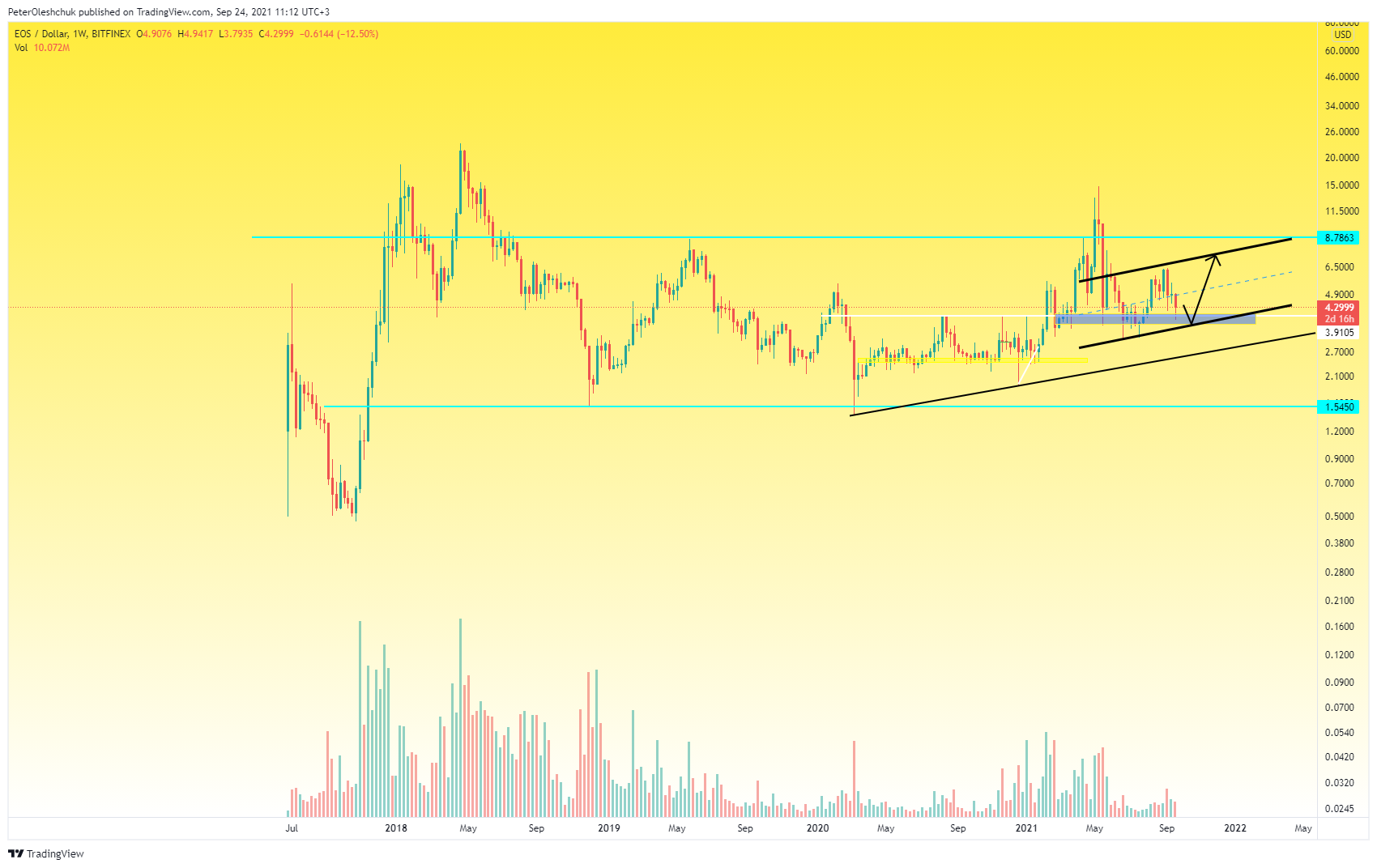 In fact, since March 2020, buyers have been keeping this trend line in the hope of launching a strong global growth impulse. The last such attempt ended in May, and the EOS market has not yet recovered from this failure. The ideal scenario for EOS would be to stop price in a long consolidation to accumulate a large position for growth. And given the trading volumes and the nature of price movements, this is a very real scenario.

Technical Analysis of EOS on the Daily Timeframe 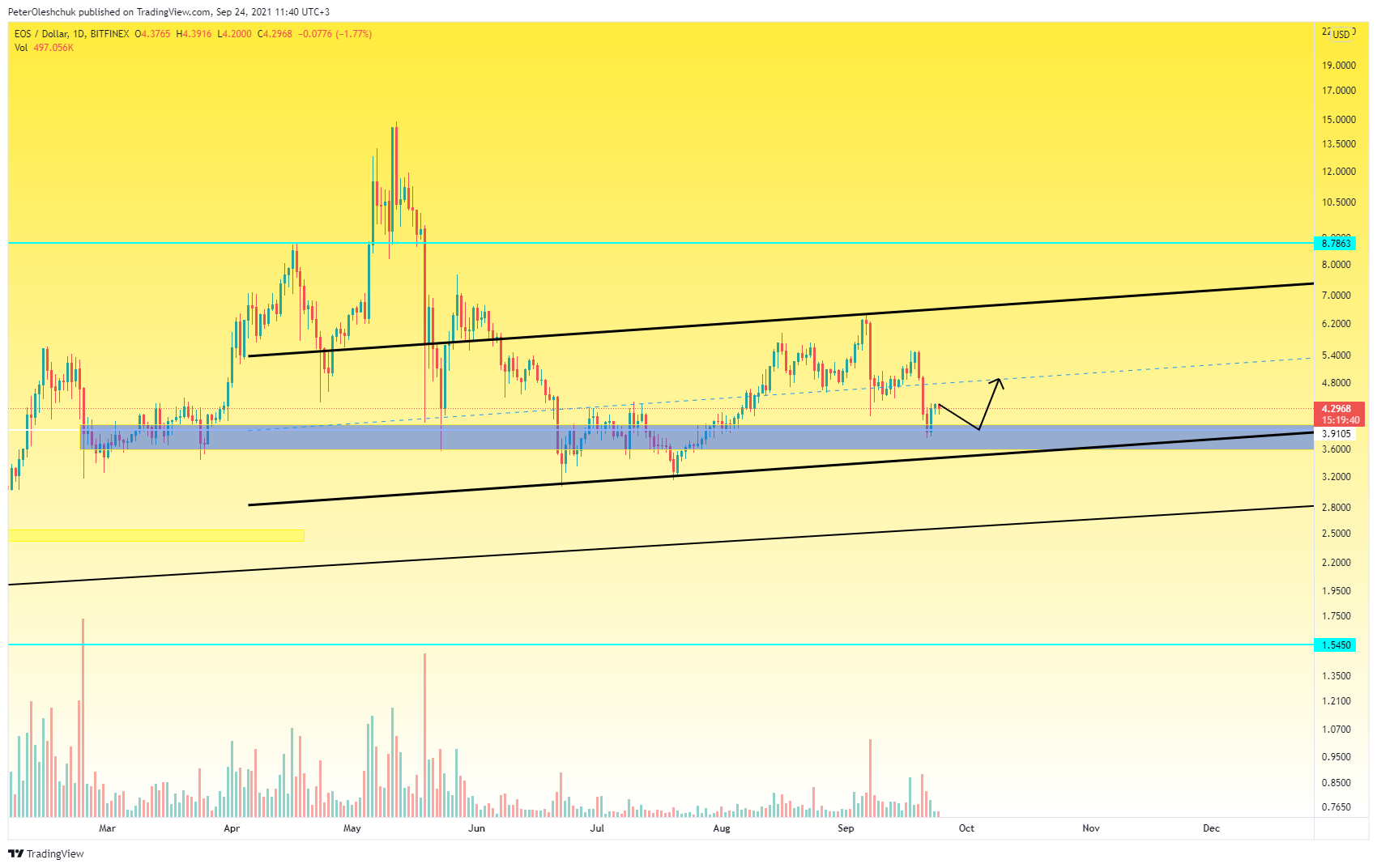 Analyzing the situation on the daily timeframe, we can see that the market is still dominated by sellers. Sharp impulse waves of fall remain without serious resistance. Even after reaching the important liquidity zone of $3.6-$4, buyers could not organize a sharp rollback.

At the moment, a positive scenario in the EOS market may be in the case of maintaining the previous local low. In this case, we will expect the formation of a correction wave with a target of $4.8. At this point is the middle line of the black growth channel, which has worked out well in history, slowing down the price movement. If this wave of growth will take place at low volumes - we will expect the second test in the range of $3.6-$4.

The EOSBTC Price Hints at 30% Fall 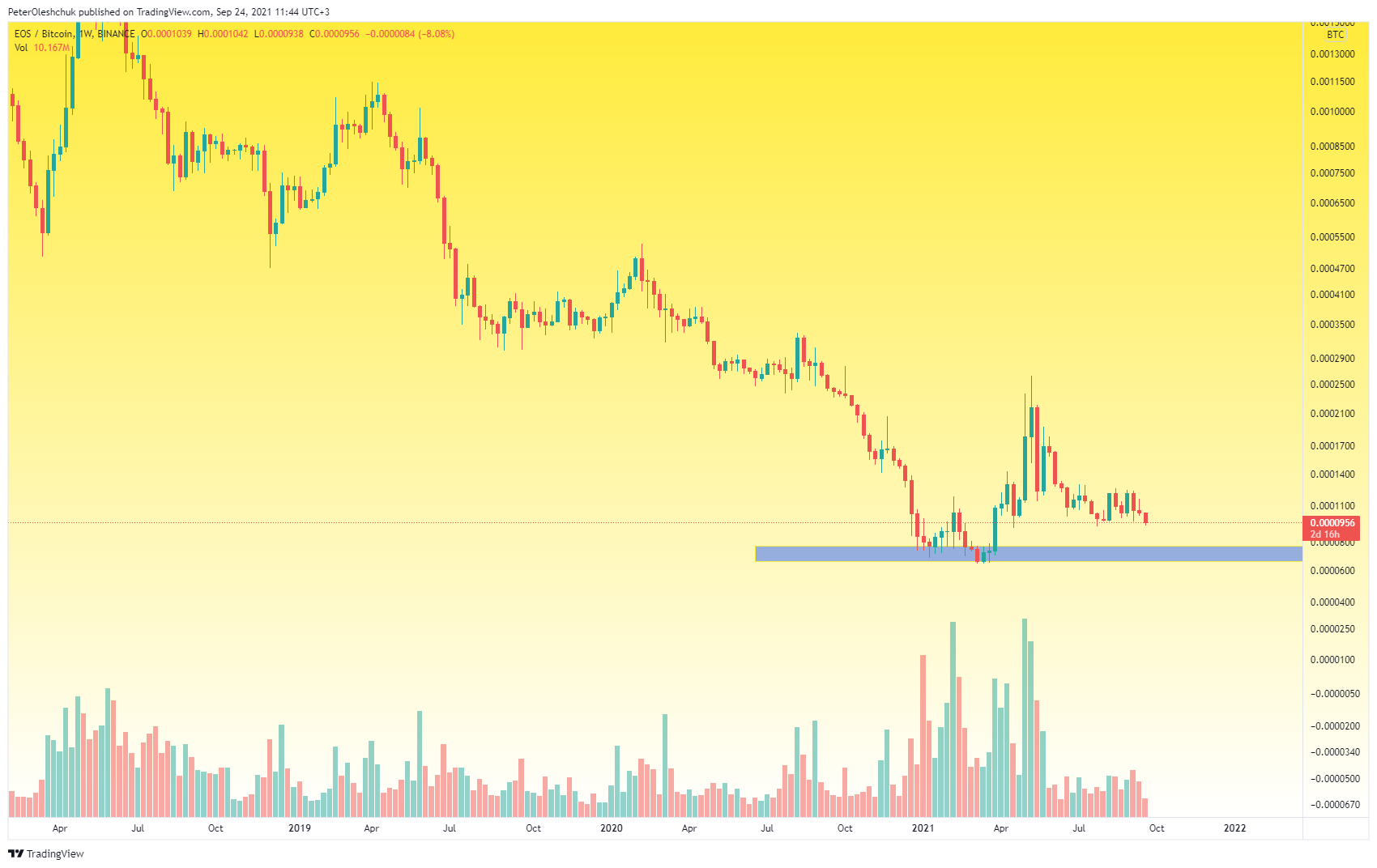 However, looking at the weekly price chart of EOSBTC, the positive immediately disappears. After the great efforts of buyers during the growth, which were supported by volumes, sellers easily lowered the price to the first critical point 0.000095. This mark became local support for buyers in April 2021, after which the growth trend will continue.