The popularity of decentralized finance apps exploded manifolds in the past year. Ethereum has been the favorite blockchain platform for the deployment of these applications. According to the 2020 dApp industry report by dappradar, 95% dApp transaction volume is accounted for Ethereum’s DeFi ecosystem. Ethereum is now processing more than a million transactions per day, which is double from a year ago.

Current Economics of Mining on Ethereum

The average transaction fee on Ethereum has reached above $38. This level is 25,000% up from the last year when users paid just around $0.15 per transaction. These ridiculously high prices of gas in Ethereum are making DeFi unusable.

Some DeFi transactions are expensive than others. Simple transfer of Ethers between users or interaction with ERC20 tokens is much cheaper than token swap on any exchange or add/removing liquidity from a token pool. 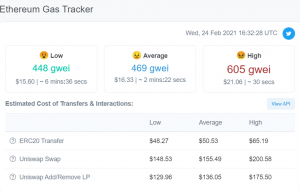 Such high prices make it exceedingly costly for an average user to interact with any app built on Ethereum. One of the earlier advantages of using blockchains was lower transaction costs as compared to other payment methods, but the current trends clearly ignore that agenda. 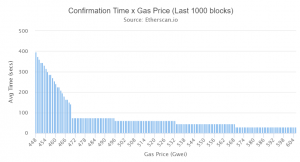 The high gas paying transactions are confirmed in no time. While the transactions with lower gas prices are generally ignored and take about a few mins on average. Some DeFi transactions like flash loans and arbitrage trade require swift transaction confirmation, thus cost more.

On the flip side, this has been the best time for miners. Ethereum mining has never been more profitable for the miners. Per day earnings from mining are exceeding beyond $50M. With few days yet left in Feb, miners have already crossed $1B as mining revenue. The majority of this is attributed to the high transaction fees. 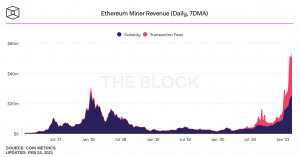 Pertaining to the inconvenience for users and high volatility in gas prices, top Ethereum developers are pushing the implementation of EIP-1559. It is an Ethereum Improvement Proposal introduced by co-founder Vitalik Buterin to change the existing fee model of Ethereum. It proposes to burn a portion of the fee earned by miners to regulate gas prices and make ether deflationary.

Furthermore, it will be discussed on Feb 26th in a community call featuring developers and miners. This community call is mainly to address miners’ concerns and build consensus for the EIP. Headed by top Ethereum developer, Tim Beiko, it will also be attended by mining pools such as F2Pool, Independent, and Flexpool.io.

With 99% of its large state testing already done, EIP-1559 is likely to be launched with the London hard fork in July according to developers.

Not everyone is in the support of this development. A group of mining pools opposing the EIP has launched a campaign. Pools like Flexpool, Sparkpool, Ethermine, Nanopool, 2miners, and some others have registered for opposing it.

Though a Reddit survey conducted by Flexpool indicates most miners in favor to push for EIP-969 alongside 1559. EIP-969 modifies Ethash, which is an Ethereum consensus algorithm to break the specialized ASIC miners. This change will effectively remove ASIC miners from the network. Their removal means better pay for all GPU miners, offsetting the losses from EIP-1559.

It proposes some changes in the current Ethereum fee model. The current scenario follows a fees bidding system in which the user who wants to make a transaction submit a gas price that he is willing to pay. Miners sort all the transactions as per gas price and include the topmost profitable ones first. With congestion in the network, the users generally end up overpaying for their transactions to be confirmed. Transactions with low gas prices have to wait much longer to be confirmed. The high level of wait time and gas price is making DeFi and other dApps unusable for average users.

EIP-1559 aims to make transaction fees more predictable and to improve the user experience by automating the fee bidding system.

A new concept of the base fee is introduced. It is the minimum fee fixed for a block that has to be paid by a transaction. An increase in the network capacity to process more transactions is achieved by changing the maximum gas limit per block from 12.5M to 25M gas. The base fee can be adjusted up or down depending on how congested the network is. When the network is at more than 50% utilization the base fee is incremented, and vice-versa. It also introduces a miner tip, a separate fee that can be paid directly to the miner to incentivize them to prioritize a transaction.

This proposal also aims to simplify the user interface of wallets. The wallets would not have to estimate the gas fees. The base fee could be automatically set based on the information available in the previous block. This will automate the current bidding system for fees. The main feature in this EIP which has caused a stir among the miner community is that the entire base fee is always burned. For a block, miners only receive the block reward and the miner tips. It causes severe implications for miners reducing their profits. Some miners are reluctant to implement this proposal suggesting pushing the changes to be included in Eth2.0 rather than now.

The positive effects of base fee burning would be on Ether supply. More network activity would mean more base fees for a block resulting in more ether burned. It would make the ether supply less making existing ether more valuable.

Vitalik Buterin took to a Chinese social media platform addressing the threats by miners over downing tools or a potential 51% attack. It is important to note that the majority of Ethereum mining power is concentrated in China.

According to Chinese industry portal Wu Blockchain, Vitalik said that Ethereum will move to proof-of-stake (Eth2.0) as soon as possible. Vitalik said that the greater significance of EIP-1559 is that almost every exchange can be confirmed within 1-2 blocks. At present, the congestion of Ethereum is very serious, and the fees earned by miners have repeatedly hit record highs.

Ethereum community cannot just ignore the threats by these miners. Top mining pools that are against the EIP, flexpool, sparkpool, ethermine, nanopool, and 2miners hold the majority of network hash rate share and are easily capable of colluding and forking the Ethereum chain.

A similar hard fork was pulled by a portion of the mining community in 2016, which resulted in the formation of Ethereum Classic after the DAO hack.

It is just a matter of time that the Ethereum community will be ready with the EIP-1559 upgrade to reduce the volatility of transaction gas fee levels. They are trying to take aboard the mining community, which is in denial to accept this upgrade.

We will know more after the rounds of discussions between them, due on Friday.