Every financial product has been affected by the pandemic, including the stock market, commodities market, and even the cryptocurrency market. The COVID-19 outbreak wreaked havoc on the global economy. However, the current cryptocurrency market fall should be regarded as a blip on the radar, and Bitcoin should be treated as an asset class with a long-term growth prediction. Price corrections are a fact of life in any asset class, and Bitcoin is no exception.

The last year has been a watershed moment for cryptocurrencies and blockchain technology. Cryptocurrencies have proven to be extraordinarily durable in the face of such extremes and economic meltdowns. Fortunately, the fast rise in worldwide high-speed internet access and digitization has created a fertile ground for digital currency. And not just Bitcoin. The crypto market is blessed with numerous crypto tokens that have helped to pull up its global crypto cap to $2 trillion. Ethereum is the second-largest cryptocurrency in the market today and has shown remarkable growth in the past 1 year.

Ethereum: The Best Alternative to Bitcoin

Bitcoin is Ethereum's main rival at the moment. Since China's cryptocurrency restrictions were tightened and Tesla CEO Elon Musk altered his mind about Bitcoin, its value plummeted in May, putting Ethereum in the forefront. When Vitalik Buterin created Ethereum, he concentrated on removing all of Bitcoin's constraints. Ethereum is built to function with a wide range of applications, from social networks to large companies. Because Ethereum can be used to construct more apps, it is favored above other cryptocurrencies as the blockchain grows in popularity around the world.

Ethereum's proof-of-stake method can help with cheaper transaction costs, reduced electricity consumption, and more. Ethereum also allows its investors to profit from its transactions by earning interest. Some investors and opponents believe that the Ether cryptocurrency may eventually overtake Bitcoin. According to sources, Bitcoin was up 0.48% on June 6th, while Ethereum was up 13.54%. Ethereum was traded in daily spot exchanges for around $231 million in 2020. Ethereum has increased by over 900% in the last year, while Bitcoin has only increased by 275%. The crypto is currently trading at $3160, with a global market cap of $365 billion. 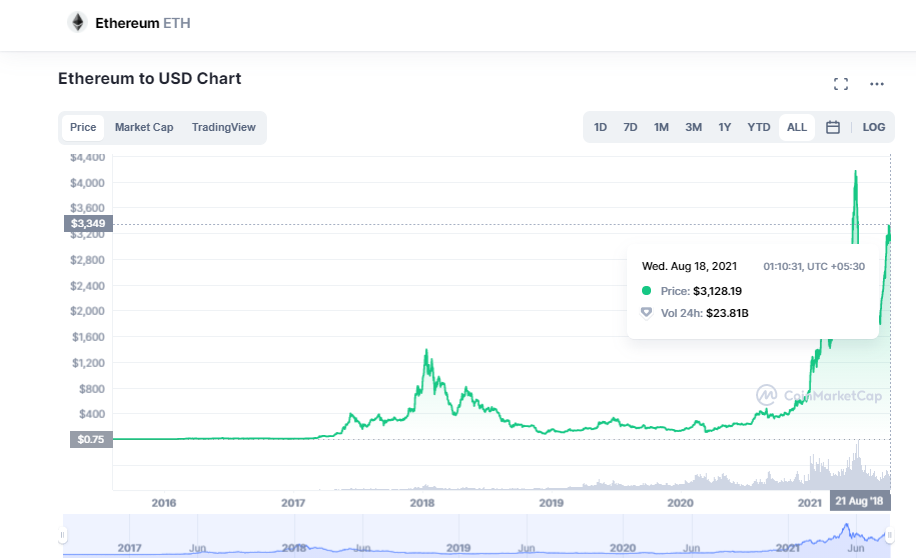 The Growth of Ethereum

The popularity of Ethereum technology is at an all-time high. The growth of Decentralized Finance (Defi), a concept that relies on blockchains and smart contracts rather than traditional financial intermediaries, has sparked an interest. It has also come from Ethereum layer 2 solutions, which are extremely scalable and efficient technologies built on top of Ethereum, as well as significant developments with stablecoins, which are largely anchored on the Ethereum network. As a result, the excitement and interest in Ether indicate a rising acceptance of decentralization and appreciation for it.

The growing interest in blockchain technology is one of the prime reasons for the growth of Ethereum. To begin, blockchain technology has gained widespread acceptance and attention. According to a Deloitte analysis, 40% of surveyed organizations intended to spend at least $5 million on blockchain initiatives in 2020 and 86% of companies in the United States have formed or are in the process of developing blockchain teams. Blockchain was rated as a top-five strategic priority by 55% of respondents polled.

This widespread acceptance and investment shows that blockchain technology is gaining traction among those wishing to utilize it to improve company operations or conduct transactions. Due to its DeFi and scalability credentials, Ethereum has been established as the most recognized cryptocurrency for these uses.

So, if you're thinking of investing in the ETH token, knowing what other experts have to say about it can be helpful. This article will provide you with a fast overview of the ETH coin price prediction for the years 2021-2025. The goal is to assist you in determining whether the ETH token is a good investment.

What Is Ethereum and How Does It Work?

Ethereum is an open-source, decentralized blockchain system with its coin, Ether. ETH serves as a platform for a variety of different cryptocurrencies as well as decentralized smart contract execution. Vitalik Buterin first introduced Ethereum in a whitepaper published in 2013. Buterin and his co-founders raised funds for the project through an online public crowd sale in the summer of 2014, and the blockchain was formally launched on July 30, 2015. Ethereum's stated goal is to create a worldwide platform for decentralized apps, allowing users from all over the world to write and run censorship-resistant, downtime-resistant, and fraud-resistant software.

Ethereum was the first to introduce the concept of a blockchain smart contract platform. Smart contracts are computer programs that automatically carry out the procedures required to fulfill an agreement reached between multiple parties over the internet. They were created to eliminate the need for trusted intermediaries between contractors, lowering transaction costs while enhancing transaction reliability.

The main innovation of Ethereum was the creation of a platform that allowed it to execute smart contracts using the blockchain, which enhances the already existing benefits of smart contract technology. According to co-founder Gavin Wood, Ethereum's blockchain was built as a sort of "one computer for the entire planet," theoretically capable of making any software more resilient, censorship-resistant, and less prone to fraud by running it on a globally dispersed network of public nodes.

ETH began progressively climbing in price in January 2016 and hit a high of $15 in March. However, as a result of the Ethereum hard fork, the price dropped by a factor of two. The ETH price performed admirably, going through $500 and eventually reaching $900 in January 2018. Although the ETH cryptocurrency fell to a low of $640 in February 2018, it has recovered as predicted. According to the news report, the Pandemic appears to have set the scene for Ethereum price, with its excellent success surpassing Bitcoin in the last year. According to past reports and estimates, ETH/USD has increased by 100 percent in the last fifteen days, rising from $200 to $400 in just fifteen days in July.

Ethereum has grown significantly over the last year, and it is expected to exceed the $700 mark by the end of December 2020. Following that, ETH has experienced a strong climb since the beginning of this year, reaching a new all-time high of $4362.35 in the current month. However, after reaching $4362, Ethereum experienced a significant collapse and plummeted to $1786, but it later began a recovery, and the ETH price is now trading above $2500.

The month of August was jam-packed with upgrades. Ethereum appears to be on the rise. The EIP-1559 London hard-fork, which is set to go live on August 5th, aims to alleviate some of ETH's present bottlenecks, namely its high fees and low transaction throughput rate. Investors have positioned themselves for the upgrade and anticipated rise, which will bring Ethereum above $2,700. A breach above $2,800 might ignite a flood of buy orders as investors anticipate gains above $3,000. With further advancements and the introduction of Ethereum 2.0, the price is expected to grow steadily throughout the year.

If Ethereum reaches the forecasted high as the year comes to a close, it may start the year 2022 with the same bullish trend, trading between $4816.55 and $5000. In contrast, if it reaches the lowest levels before the end of the year, the price will revert to bearish territory in 2022, possibly reaching $2428.96 by January 2022.

If ETH focuses more on its development and scalability difficulties, the price may rise dramatically with various variations over the year. If the network successfully improves ETH 2.0 to meet user expectations, Ether's price might reach $15962.33.

If the network effectively transfers present investors to the following year, with no big changes and the regular buy and sell pressures, ETH may trade for $5311.98 at the end of 2022.

If the ETH ecosystem focuses on growing network ventures, it may prioritize new projects, developments, and partnerships to strengthen the Ethereum network. If scalability improves and ETH 2.0 becomes more user-friendly, the ETH price is expected to reach $25,757.41 at the end of five years.

With the latest Ethereum 2.0 improvements like the abandonment of PoW, most investors are likely to continue with the network and allow ETH to trade at roughly $11,010.03 or higher. However, if a hypothetical crash occurs as a result of any potential legislation, the ETH price might fall further to $8521.63.

The ETH cryptocurrency has seen many ups and downs, but it currently appears to be racing to set a global record. And with so many promising projects coming up, it looks like that the year has a lot in store for this cryptocurrency. And that is the reason why most of the market and expert predictions for the token are positive and bullish. Here are some for you to notice.

Ethereum may progressively grow to $3591.69 by the end of 2021, according to DigitalCoinPrice. In the coming year, the price will more than double to $4587.07, about twice its current level.

LongForecast predicts that Ethereum will cost between $3127 and $3627 by the end of 2021. By December, the price change is expected to reach around 34%.

Their experts say that Ethereum's price may continue to rise and hit new highs. The altcoin would be focused on improving user security. According to Coinpedia's forecast, the price of Ethereum might reach $5000.12 by the end of 2021.

Price volatility, increased investor fear, or a lack/failure of updates, on the other hand, might be a setback for the coin, and the ETH price could fall to roughly $2416.70 by the end of the year.

As of 2021 August 18, Wednesday, the current price of ETH is $3154.610, and the data shows that the asset price has been rising over the last year (or since its inception). Because Ethereum has been on the rise, they believe that related market categories were quite popular throughout the period in question.

Because it is one of the oldest players in the crypto space, Ethereum has earned the trust of enterprise businesses. Its real-world applications have also covered 11 important sectors in which enterprise firms may be interested. And Ethereum's vast developer community, which works on blockchain protocol enhancements, could be viewed as a technological advantage by corporate organizations. Therefore, ETH is probably one of the best investments in the crypto space.