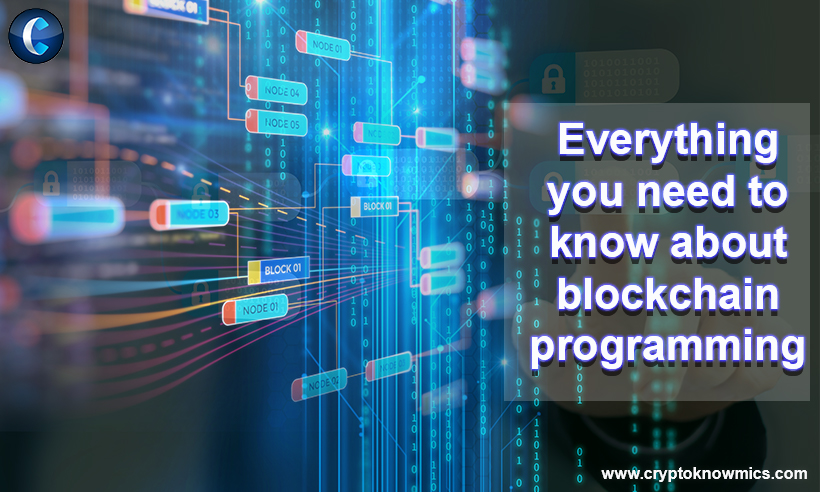 Everything you need to know about Blockchain Programming

We are used to the traditional involvement of a middleman or a broker when it comes to money or things bought with money. Well it doesn’t exactly stop there. Money is not the only asset that sees the controlling authority apart from the owner, data joined the party majorly since user generated content became the defining component of web 2.0 controlled by leading parties like Facebook. In such a system where the central authority is technically the owners of the data therefore have the controlling power over prices as well, Users have to be dependable on such parties for ethical practices and interest.

If you have been in touch with the updates and events of the fin-tech world for the past decade involving cryptocurrency, then there is a good chance you are familiar with the blockchain technology that runs the bitcoin network. Blockchain programming was designed while keeping in mind the objective of minimizing trust within any central or controlling authority by decentralizing the data establishing a network of individual peer to peer transactions that can be directly connected without the involvement of a middleman or central authority like a bank.

One of the most well known uses of blockchain programming can be well observed in cryptocurrency, a digital currency with no governing authority. Bitcoin is the first of its kind with this technology surviving in an interdependent and sustained ecosystem involving the participation of miners and their hash contribution thus controlling the supply of the currency but that is a different topic for another time. Blockchain has led different sectors of the world like agriculture, health, energy and others to find solutions and then implement them on the problems that were previously impossible to solve including application of this technology to smart digital contracts, rendering the need of a middleman null to verify them in the first place.

It is highly important for features like protocols and architecture of the blockchain needs to be settled before the great launch that is written in code. Going back to 2009, before the launch of the bitcoin blockchain, the protocols and rules over the situation were coded in c++. Languages like C and java are generally used to write this kind of coding that works with the system.

With a goal to provide advanced blockchain technology with easy to use API, hyperledger is a project of open source blockchains facilitating training and tools to support associative development of blockchain oriented decentralized ledgers inevitably contributing in the advancement of technology.

Hyperledger facilitates all components of blockchain architecture including information sharing and data privacy that ensures security and oversees the fact that the participating parties are the only one with access to it.

With so many advanced choices in programming languages, why C++ is still the modest choice for blockchain programming is due to some very appealing features. Due to the difficulties faced in developing blockchain, it needs efficient management of resources, while supporting its interaction with undependable nodes but still facilitating fast service to all them which is a crucial factor to a cryptocurrency. C++ offers total control over memory usage and CPU to adhere to these demands delivering higher performance.

JavaScript is generally used in creating efficient and interactive web pages and is known as one of the most famously used languages in developing software with HTML and CSS, it definitely gives an extra touch to its features and services.

JavaScript capabilities of handling communications among different blockchain nodes makes it suitable for designing blockchain operations, given the increasing number of blockchain users. However it is still questionable in front of C++ with its capability of expanding a system’s processing power.

Python is comparatively a modern language with simple syntax quite similar to English language, making it highly suitable for new coders and is known to create web based applications on a server with capability to handle larger amounts of data and complex mathematics.

Whatever the case, it is not possible to leave out python from the list, as almost every blockchain ecosystem has a public tool that is coded on python.