Fantom (FTM) Technical Analysis: The Growth Trend Is Too Strong to End 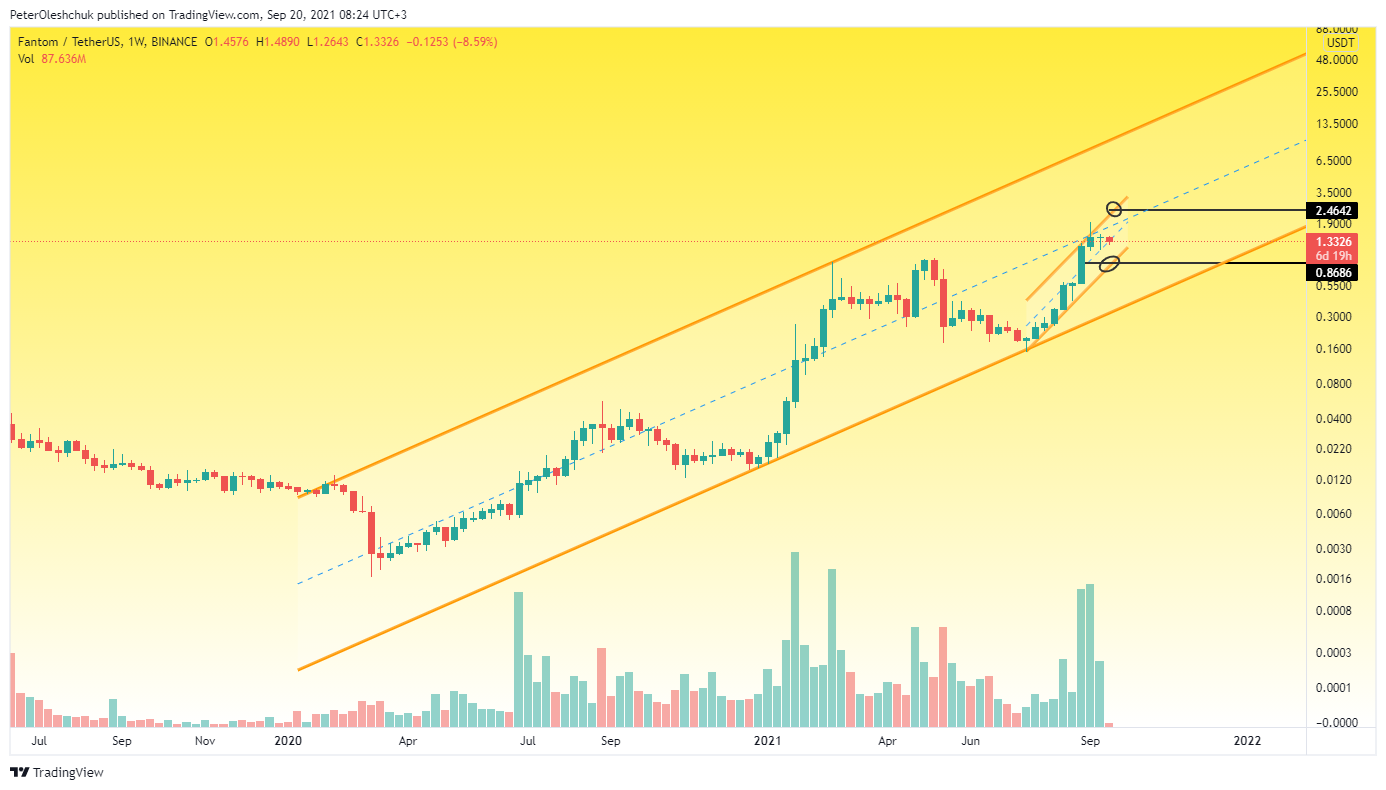 The weekly candle in the FTM market closed with a hint of the beginning of the growth wave correction on 21 July. Buyers failed to fix above the closing price of the previous weekly candle. At the same time, trading volumes fell twice last week. The global initiative in the FTM market has changed, although this is not yet felt in small timeframes.

Seeing the failed attempt of buyers to continue to grow within the global growth channel, investors stopped transferring capital into this cryptocurrency. And they decided to convince the strength of buyers. Given the fact that sellers failed to update the local low of the previous weekly candle over the past week, we can assume the continuation of a narrow consolidation at local FTM price highs.

In this scenario, the probability of continuing the growth wave without correction will significantly increase. For this scenario, buyers should not be allowed to update the local low of $1.1335 during this week. However, failure to meet this condition will quickly move the price to $0.87. This mark contains the previous historical high.

Technical Analysis of FTM on the Daily Timeframe 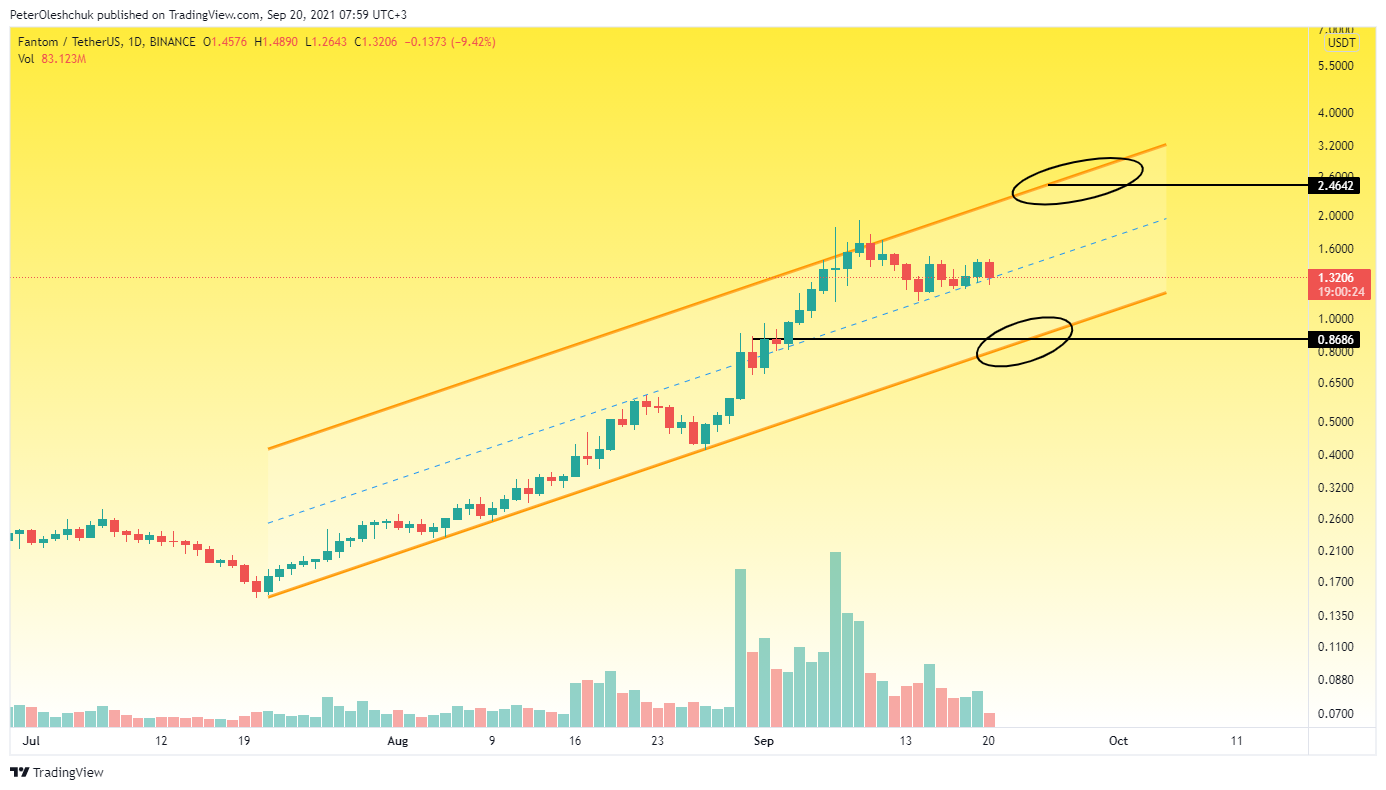 Analyzing the movement of the FTM price on the daily timeframe, we can see two main critical points on the way to the formation of the growth wave from 21 July. Throughout the local growth trend, trading volumes increased markedly in two places on the chart - near the mark of $0.87 and near the mark of $1.4. In principle, until 30 August, buyers managed to raise the FTM price without volumes. This constantly provoked the thought of market weakness and the likelihood of a sharp price correction.

However, between 30 August and 9 September, trading in the FTM market increased approximately 5 times. It is likely that during this period in the FTM market there was the unloading of positions of medium-term investors. This is evidenced by a rather weak growth result at such anomalous volumes. If during 9 days of the FTM price growth till 30 August the price grew by approximately 10%-15%, then after the increase in trading volumes in 5 times, the price growth became 15%-20% per day.

The FTM price on the middle line of the orange growth channel adds spice to the FTM market. This price position is quite favorable for both the beginning of a sharp fall wave and a sharp growth wave. Loss by buyers of the local mark of $1.12 will lead to a collapse of the price to the mark of $0.87. Though, it is only necessary to fix buyers above $1.5 so that the continuation of price growth to $2.5 becomes the only possible scenario in the FTM market.

The FTMBTC Price Hints at Consolidation with Further Growth 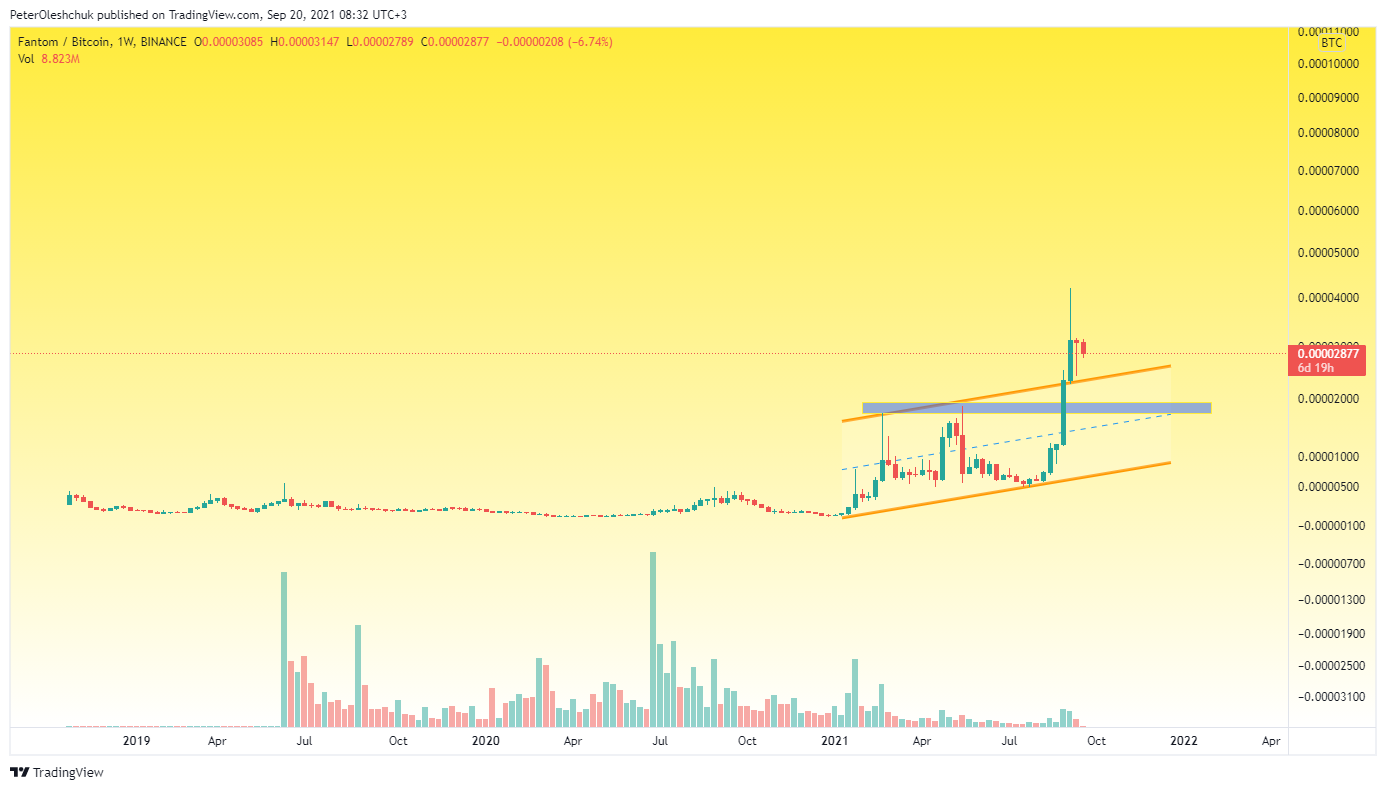 Analyzing the FTMBTC chart, we see that after a long lull, the market has finally come to life. Buyers keep the price well and create favorable conditions for the start of consolidation on a weekly timeframe to collect new positions. Such facts increase the probability of a positive scenario in the FTM market, even if the BTC price correction continues.

Given the accelerating growth trend on the FTMBTC chart, selling this cryptocurrency to a long-term investor may be the wrong decision. Nevertheless, to enter the FTM market, we should expect a test of the $0.87 mark.