Last two months proved to be quite difficult for not only crypto space but for the whole world- politically, economically and socially due to the outbreak of COVID-19. The crypto market had plunged to almost 50% from the time when it touched nearly $10,000 at the beginning of the year.The fact cannot be overlooked that not only the external conditions affect the price of bitcoin. People or events associated closely with the crypto markets have the full capability to shake the crypto markets as well. This guide is not like the ordinary "cryptocurrency trading guides for beginners", but it is the guide to cryptocurrency feuds which will include the notable feuds of the crypto world.

Let Us Start With Guide To Cryptocurrency Feuds

Social Media!! None of the situation or person can beat social media to shape up the crypto markets. Feuds or quarrels take place in almost every sector of the industry, and it makes an impact on the industry if the people associated are the prominent personalities of the space. So, hold your jaws and start reading: 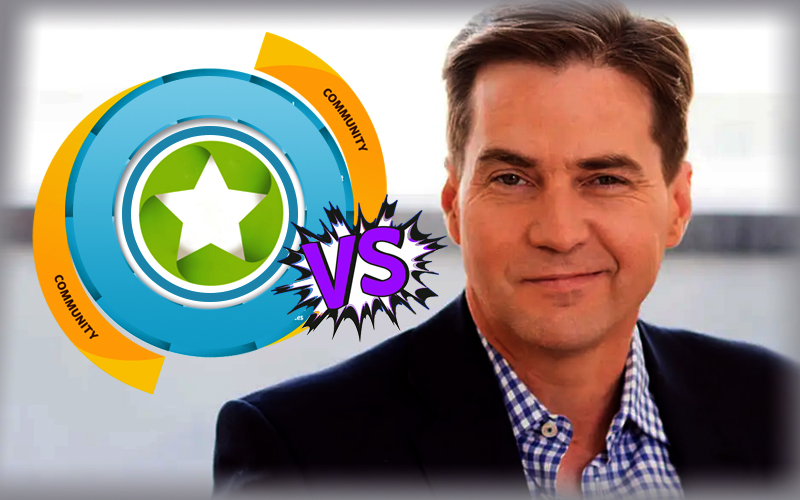 Craig Steven Wright!! The name which is not meant to be ignored in crypto space. The debatable PC researcher and so-called "visionary of the crypto market" always has been the part of headlines for his claims of being Satoshi Nakamoto ( who pseudonymously known to be the founder of Bitcoins) and pisses off many of the crypto enthusiasts.

Wright has so far not been able to give any proof which can prove him to be Satoshi, just shouting loud about his identity as the founder of Bitcoin. He faced the repercussions on social media when he outrageously attacked the reputed crypto members who denounced the claims of Wright that he created bitcoin.

#faketoshi has always been trending on social media platforms after Jihan Will, CEO of Bitmain tweeted that "Craig Wright is fake satoshi". 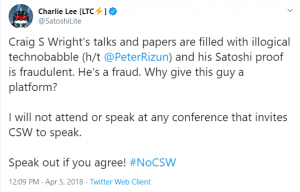 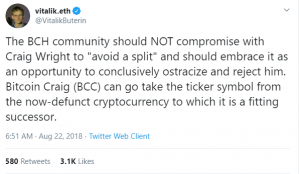 Wright, who is the founder of Bitcoin  SV (Bitcoin Cash Forked Chain), always been in the news due to his vague claims in the crypto world. His company has to bear the losses due to his insensible behaviour. For instance, Changpeng Zhao, CEO of Binance, announced the delisting of BitcoinSV from his exchange, after he encountered that Wright was involved in online harassment of the owner of the twitter account Hodlonaut.

Craig Wright is not Satoshi.

Anymore of this sh!t, we delist! https://t.co/hrnt3fDACq

Recently, Wright failed in revealing bitcoin holdings and being abused of holding the documents related to the 50% of the bitcoin and intellectual property which technically belongs to his partner Klieman in the hearing of the Federal Court of Florida.

Thus, after analysing the comments from various crypto enthusiasts, this guide to cryptocurrency feuds can conclude that Craig hurts the credibility of the bitcoin and can be considered as the disgrace for the entire crypto space. 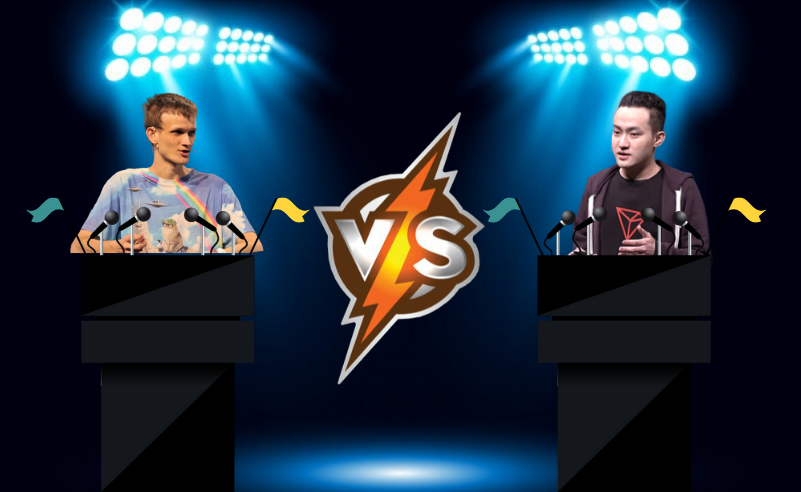 Let us forward from Wright (though his stories are never-ending!) and move forward with Justin Sun, who is another renowned face of the crypto space. Justin is famous for his tantrums related to self-promotion, appealing announcements and love to be the part of crypto gossips. Justin Sun, who is the founder of the Tron, a dedicated project to design decentralised infrastructure, constantly compares his project with that of Ethereum. He brags that his Tron is much more efficient than Vitalik Buterin’s modified version of Nakamoto’s Bitcoin, i.e. Ethereum. The whole of the battle started in 2017 when Sun started taunting on the statement given by Vitalik that the wave of crypto won’t be established based on publicity. Justin, without thinking about his position in the crypto space, stated that Ethereum itself is based on promotion and extended his statement by saying that the Tron will be responsible for the bullish markets in the future of crypto markets. Then, the thread of the baseless battle started between Valtik and Justin Sun.

As per the analysis and guide to cryptocurrency feuds, the battle is not just continued but aggravated in 2019. As per the expectations and predictions of the crypto community, the Ethereum did not perform outstandingly. On the contrary, TRON outperformed and showed terrific development. At this point of time, Sun did not directly attack the Vitalik, but prime supporters of Ethereum were targeted.

Tron is one of the most controversial projects among crypto communities. It was accused of messing up Tesla giveaways, plagiarism allegations and also for copying the whitepaper of Ethereum. 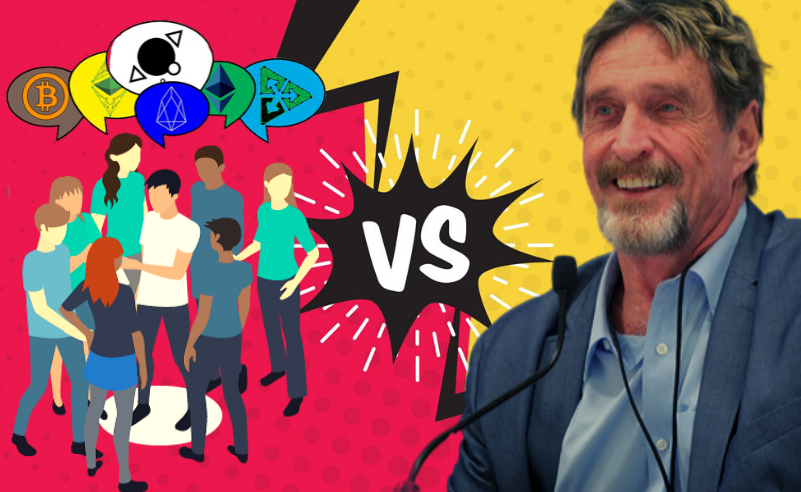 John McAfee, founder of one of the largest cybersecurity firms of the world- McAfee (1987) considered as one of the biggest clowns by the crypto community. He always gives the fierce competition to Craig Wright when it comes to being the part of the headlines of the crypto space. Recently, he has grabbed the new followers due to his claims that Bitcoin would touch $1 million by the end of 2020.

Lot's of people asking me over the past two days whether my bet is still on (that I will eat my dick if Bitcoin does not reach $1 million by the end of 2020). ABSOLUTELY!!! It is a bet that I cannot possibly use. Use your heads people! Run the numbers that crypto folks well know.

Though he is being abused and mocked by one or the other day by the crypto enthusiasts. But his major quarrel with Wright cannot be ignored. Way back, when Wright claimed to be Satoshi Nakamoto, the pseudonymous creator of bitcoin, McAfee was one among the first to mock over his claim and reject it. Since then, a war of words has continued.

McAfee considers himself powerful enough that he picked the fight with the regulator of crypto markets in the US, Security and Exchange Commission. He first declared the war with the SEC and later kept running from the regulator. The SEC reacted by compelling the McAfee to leave the ICO promotion over social media and asked him to stop his followers from filing the complaints to the SEC. Though he got the point of SEC and stopped promotion of ICO, he continued grabbing the headlines to onboard new users. 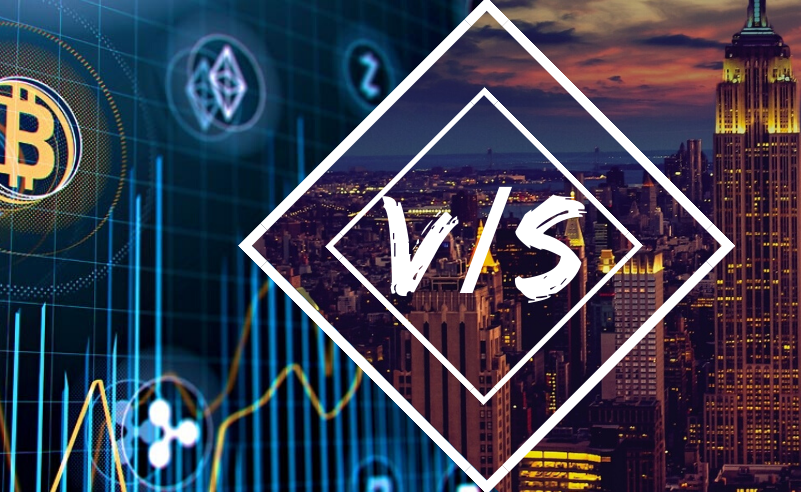 Till now, you must have come to know that this guide cannot teach you how to start learning cryptocurrency but certainly can show you how fun the crypto space is! Now, this might be the last feud of this beginner guide to cryptocurrency feuds.

The CEO and founders have always accused New York authorities who aim to regulate the crypto markets of the crypto space of crypto exchanges or crypto products, who are unable to get the license for setting up in the United States. From Binance to Kraken, Bitfinex to Tether, authorities of New York are in long quarrels with everyone.

Jesse Powell, CEO of Kraken even compared the New York regulators with his crazy Ex when he was being dragged every time by the authorities after 2015. He stated that” NY is that abusive, controlling ex you broke up with three years ago but they keep stalking you, throwing shade on your new relationships, unable to accept that you have happily moved on and are better off without them. #getoverit”. The New York regulators abused Kraken back in 2015 of functioning illegally in the state, soon Kraken left the US but has been accused till now.

iFinex, the company who owns and operates Bitfinex (crypto exchange) and is the issuer of stablecoin Tether. The legal team of the company was pissed by the accusations of the New York Attorney General for misleading the arguments in the case running against them. The lawsuit accused that iFinex permitted the users of New York to utilise its platform despite the explicit ban since 2015.

Regulators in New York are being criticised and grab the headlines every time the regulators question the integrity of any exchange. New York might win every battle but may it is not always in favour of people living there.

How Much Do The Popular Cryptocurrency Feuds Impact The Crypto World?

Just like the volatile nature of cryptocurrency cannot be ignored, this guide to populist cryptocurrency feuds won't allow you to ignore the fire and storms associated with feuds of crypto space. Crypto markets experience the battles not only among the various crypto coins but also among the people, authorities and enthusiasts related to it. Nonetheless, feuds most of the time result in the healthy competition to get over one another and to grab the attention of the traders to the crypto markets. The fact cannot be denied; if some of the people are gaining the headlines in pulling the slack of the crypto space, then many other unknown faces are working hard to strengthen the industry.