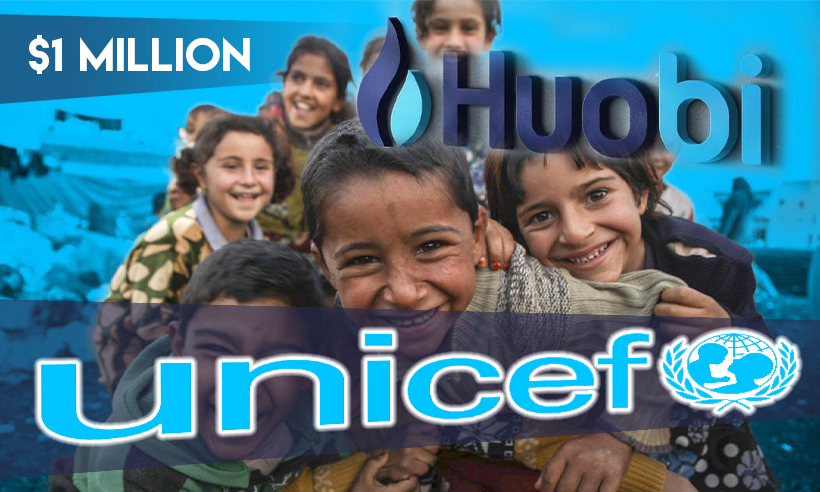 The leading blockchain company Huobi Group, has committed to presenting $1 million to UNICEF to foster global blockchain innovations that have the potential to impact children and young people across the world. This will open up new opportunities for the crypto space while aiding it to become a mainstream worldwide career option.

Huobi Charity Limited notified about the offerings of $1 million on Tuesday in both Bitcoin (BTC) and fiat (USD) to the cause. The first part of the donation was made in BTC, making it the first time UNICEF receiving a Bitcoin donation from an institution since the launch of its CryptoFund.

Talking about UNICEF’s CryptoFund, the new financial vehicle allows the company to accept, hold, and disburse digital assets. In addition to the UNICEF Innovation Fund, both the initiatives provide fiat and cryptocurrency funding at early-stage startups that are beneficial to the children.

“We are ecstatic about making this donation to UNICEF as we explore the integration of blockchain technologies into other industries… Our focus is on the future, so we recognize the significance of UNICEF’s work and the importance of supporting and facilitating the growth and development of children around the world.”

Huobi has already donated seven BTC (equivalent to $350,000 at the time of donation) to the UNICEF CryptoFund as part of its $1 million commitment. The company disclosed that the remainder will be distributed to the UNICEF Innovation Fund over the next three years.

As a world-leading company in the blockchain industry, Huobi Group was founded in 2013 with a mission to make breakthroughs in core blockchain technology and the integration of blockchain technology and other industries. Huobi Group has expanded into the public chain, digital assets trading and wallet, mining pool, proprietary investment, incubation, digital asset research, etc., established a global digital economy industry ecosystem by investing in over 60 upstream and downstream companies in the blockchain industry, and formed an overall global digital economy.