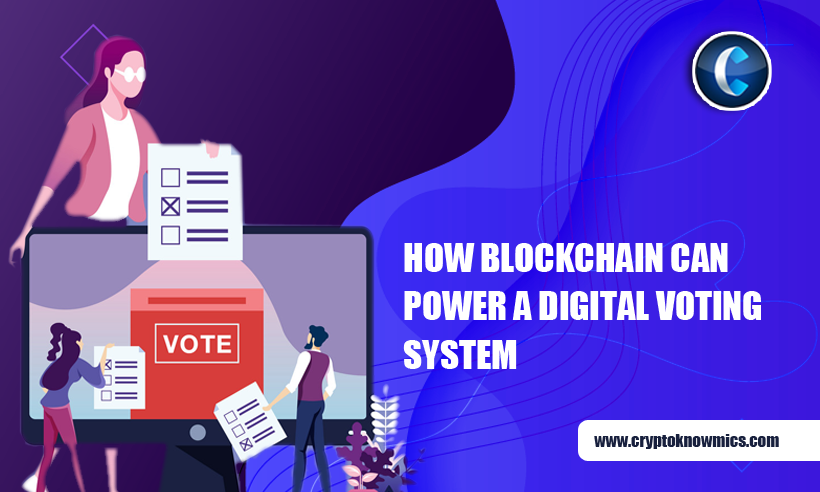 How Blockchain Can Power A Digital Voting System

Beginning with its solo application, bitcoin, blockchain offered a more secure and transparent payment processing solution than the existing one. Soon other industries realized its potential and began trying to test and try its capabilities to provide transparency in their processes. It seems promising in finance, healthcare, supply chain, education, and many other verticals.

Governments around the world are beginning to test blockchain technology in several of its high-value data operations, the most important being elections. The integrity of elections is the single most important activity for democratic governments.

The Election Commission in India is exploring the use of blockchain for its 2024 General Elections. It is working with research institutes to enable app-based e-voting to enable remote voting.

“We are doing a project with IIT-Madras, Chennai, and some of the eminent scientists. We are doing a blockchain project. We are very hopeful by the 2024 Lok Sabha elections you will see a lot of fundamental differences in the way we (Election Commission) are working, including this (e-voting).”

What is the Issue With the Current Voting Process?

All over the world, the voting process is still stuck in the decades-old process of paper ballots. Voters must leave their homes to submit votes. Polling booths are to be set up at every nook and corner of the country and maintained by the election commission. In India, the Lok Sabha elections are supposed to cost a colossal sum of Rs. 50,000 crores. Only a handful of countries like the U.S., Australia, etc. have used online voting, which is generally conducted by email. But this has its own concerns about security and reliability. Some countries use Electronic Voting Machine (EVM), which has helped in a decrease in electoral fraud. It also results in a faster counting of votes and is generally run along with a paper ballot backup. But voters still need to go to the polling booth. Postal ballots are another option allowed in many places which could be delayed or ambushed or lost en route. None ensures the safety of the votes or the fact that the vote has indeed been counted. All these processes involve a great deal of planning and in the times like Covid-19 could be difficult to conduct.

Above all, none of these processes ensures the trust the voters have to put in the largely centralized election authority. Voters have to just trust them that the process is fair and their votes are counted correctly.

How Blockchain Can Help the Current Voting System?

Blockchain is sequential storage of verified information which is difficult to alter. Such a system offers a fully auditable history of all transactions to every participant. In financial applications like Bitcoin, it provides great transparency to the users along with a much faster transfer of funds.

A permissioned blockchain-based system could introduce greater transparency to the voting process and a greater trust in the election system. It provides a scalable solution with a reduced physical involvement of authorities to oversee the secure prosecution of elections. Instead of a single agency managing elections and their authenticity, the use of blockchain can distribute the validation of information among multiple authorities, thus reducing centralization. Any change in blockchain data can be achieved by more than 50% of validators to agree, so now it gets difficult for validators to collude and manipulate information. This introduces more trust in the system as it now prevents a single agent to make changes without colluding with others. These validators could be independent vote-monitoring bodies to audit the vote counting and overlook the sanctity of the entire process.

The use of smart contracts in a blockchain-based solution ensures the emulation of the rules of any election. In such a system, voters can verify that their votes are counted and recorded correctly.

Blockchain provides anonymity to its users, which is a crucial feature required before putting electoral data on a public ledger. The use of cryptographic techniques like zero-knowledge proofs to provide the desired confidentiality ensures the secrecy of the ballots. A blockchain-based voting platform also ensures no double counting of votes, secure maintenance of records, and allows for a much higher level of accessibility to the election system.

Some companies are coming up with powerful voting platforms leveraging blockchain technology. Horizon State uses blockchain to bridge the trust gap between election authorities and voters. They have developed a tamper-resistant digital ballot-box and engagement platform that is transparent and verifiable. Net Service has created a blockchain-based innovative electronic voting system integrated with one or more electoral event management procedures.

What Would Be the Challenges?

A report from MIT published in 2020 suggests that it might not be a good idea to migrate to the blockchain voting process. It believes that such a system could be subjected to potential congestions and increased cybersecurity vulnerabilities.

Blockchain systems have a higher tolerance for the failure of their nodes, but it could create serious issues for the nationwide voting process like undetectable election failures. It can also suffer distributed denial of service attacks making the network unavailable to users.

Users in blockchain participate in any transaction by using their private keys. In this case, if a user doesn’t manage his key securely, he could suffer from key theft. Now any adversary with access to that key can cast the vote, compromising the system.

Blockchain provides great potential to the election process by providing transparency to the entire system, but it has a great number of implementation challenges on its way. Voting being a crucial process for any democracy, must be tried and tested for multiple scenarios before we can witness it being used on a large scale. A fundamental concern about any digital process is that it relies on various vendors, hardware, and software, all of which add additional complexities and likely vulnerabilities to the voting process. A blockchain-based solution has to overcome all these vulnerabilities before its widespread adoption.