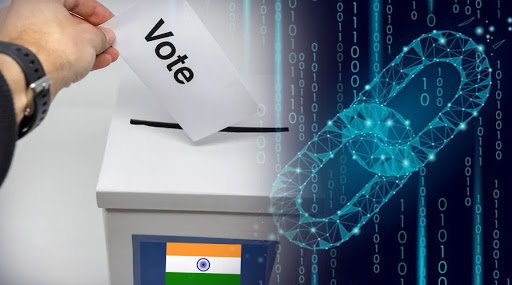 India Ready To Embrace Blockchain For The Voting System

Discussions on blockchain technology have gone beyond Bitcoin and cryptocurrencies. As blockchain has been quickly becoming unrivalled, this technology had been deployed in several areas and across different pilot projects across the globe.

According to the latest news, the Election Commission of India has been reported to join hands with IIT Madras, a premier engineering college, to work on using blockchain for the voting system to improve voter turnout, in a nation where more than 84% of citizens move from one state to another.

Blockchain Can Improve The Voting System

On describing how blockchain technology would be leveraged for what is still in its growing stage, Sandeep Saxena, the Senior Deputy Election Commissioner, cited as per the alliance, voters not residing in their home constituencies would be able to give their votes without reaching the polling booth.

He cited that the project was a two-way electronic voting system, within a controlled ecosystem, on genuine IP devices on the dedicated internet lines, equipped with a web camera and biometric devices.

Moreover, the “two-way voting system” based on blockchain technology would undoubtedly require the electors to be present during the pre-decided period in the designated venue. For using this facility, voter authorization and identification would be necessary, after the establishment of which a personalized blockchain-powered e-ballot paper would be generated.

“Assume there is an election in the Lok Sabha, and a voter belonging to Chennai is in Delhi. Rather than returning to his or her constituency to or missing out on polling, the individual can go to the predesignated venue chosen by the Election Commission, such as Connaught Place, in a particular time and can provide his or her vote.”

Many Sectors Are Embracing Blockchain

With the nation’s IT sector growing, India has realized that blockchain technology could have possible use cases amongst domains like governance, finance, banking and many more. Earlier, TRAI (Telecom Regulatory Authority of India) had notified telecommunication companies to utilize blockchain technology as an attempt to crack down on spam messages and calls.

Moreover, the Tea Board of India has communicated plans of embracing blockchain technology to promote traceability and transparency of its operations as well as products.