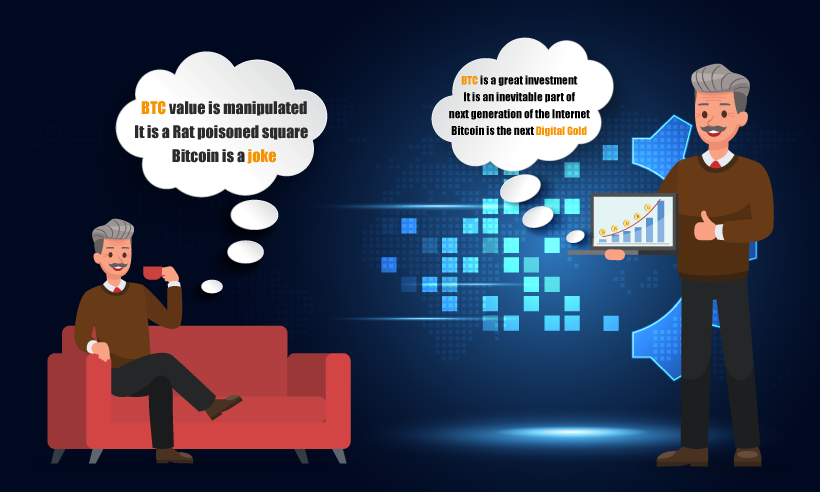 The Beginning of Bitcoin opinion 2.0

There is something in Bitcoin that stirs strong emotions among people. Reformists love it, agitators adore it, “code rebels” crave for it! But, just like a two-faced coin, not all sentiments for Bitcoin are positive. Politicians doubt it, Bankers fear it, environmentalists grudge it, and there are people who hate Bitcoin with passion!

Since its inception, investors are looking at the first cryptocurrency platform with hopeful eyes. A platform that will bring a new level of trust and control over their hard-earned money. Known for redefining and reshaping the financial system, Bitcoin has divided the market between ‘conductors’ and ‘resistors’ of the Blockchain technology.

We can clearly observe that there was a large count of well-known names who used to be the “resistor” of this digital currency. But now has realized its true potential. It is great to see that these personalities are now open about their second opinion, which we see as – Bitcoin opinion version 2.0

Let us see who are the people who fall into the category of opinion on Bitcoin 2.0. These are the names who first were against bitcoin but now the wind of Bitcoin adoption has changed their mindset from a big NO-NO to CAN BE.

Within the last 12 years, the investors’ market had changed tremendously in favor of Bitcoin. So does it affect the opinion of the Security and Exchange Commission (SEC) Chair Jay Clayton.

In earlier days, he stated that since BTC “trade largely on the unregulated market, how can the SEC be sure about the manipulating BTC value?” who now admitted the fact:

“Current CeFi mode of payment is in-efficient and is giving ground to Bitcoin for the rise.” 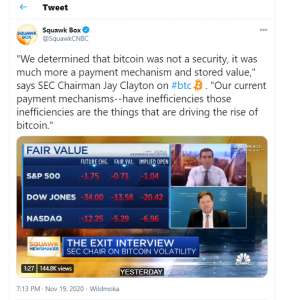 Clearly, the time has compelled the chairman to change his mindset. The dominance of a central authority is never encouraged by investors. Also, these are accompanying various inefficiencies like peer to peer trading platforms, decentralized ways, and untold cost-savings.

The ‘Oracle of Omaha’ has always been on the list of long-time critics of the crypto world. He called the world’s most famous digital coin a “rat poisoned square”. And went to the extent of saying in an interview with CNBC:

“I don’t own any cryptocurrency and I never will”

In 2019, in an attempt to change Buffett’s mind, Justin Sun had a conversation for approximately 3.5 hours long at dinner. But neither Sun nor Buffett changes their stand on it.

Echo says that the Oracle of Obama might change his mind on Bitcoin this year. He might become an indirect investor of Bitcoin through PayPal.

Author of the article “Bitcoin is a joke,” Joe Weisenthal in 2013 states that Bitcoin has no “intrinsic value” of the US dollar. He went to the extent of saying that BTC was hopeless as it has no aggressive military to make others use it.

“It’s wrong to say that Bitcoin has no value. There’s prima facie evidence that this is untrue.”

He explained that his book after the Bitcoin price raise – “Bitcoin is a joke” raised both kinds of sentiments in the public. And as the BTC crossed $300 and reached $1000 to $1200 at one point, there is always danger in changing the mindset.

Don Tapscott, author, and founder of the Tapscott Group

Don never condemned the cryptocurrency publicly but now has admitted that blockchain technology is the core part of the next generation of the internet. He states:

“I used to think Bitcoin would never fly. Now I think it’s not only going to fly as a currency, but the underlying blockchain technology will be part—a core part—of the next generation of the Internet.”

It’s going to radically transform not just commerce. . . but many of our institutions in society.

Tapscott is now the co-founder of Blockchain Research Institute established in 2017. He believes that digital currencies are bringing a revolution in the market. The influential business thinker feels that what is essential is the shift in how we assign the ownership of data assets. And how we protect the identity in the digital world.

Peter David Schiff, compared Bitcoin with a bubble and laughed at the comparison of BTC with gold. He said,

“I don’t see Bitcoin as an alternative to gold. If anything, the modern-day alchemists [ creators of Bitcoin ], but you can’t make gold digitally.” 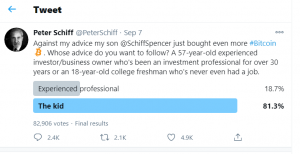 Later in 2020, he admitted that he was wrong on BTC, though bitcoin does not correlate with gold highly at the moment but is all set to become a digital gold in 2020. 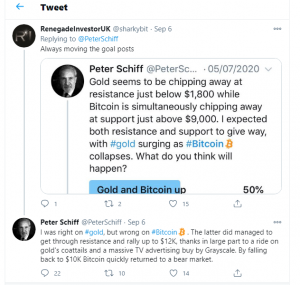 Still, some uncertain minds act like a wobbly tooth that can’t resist poking and keep coming back to curse Bitcoin on its virtual and instability in the market.

Paul Krugman proudly shows his “problem with BTC.” He describes that transaction cost and tethers are the two major concerns with Bitcoin. People are comparing this digital gold with the ‘yellow gold’ but fail to see that the real gold or the yellow gold is heavy and bulky and needs an exceptional amount to store. While the digital currency consumes high energy in terms of hash power and neither has a physical application nor a central authority to vouch for.

Be it Beef or Bitcoin, if you loathe it, you become vulnerable to avoid it at every damn cost! Crypto hater, Wikipedia editor, and author of “Attack of the 50-foot blockchain” David Gerard is a name famous among the Bitcoin haters with passion. He removed a Blockchain-related entry about the Australian Firm Power Ledger. Arguing that news publication “is not suitable for claims of notability.”

Gerard’s biased nature for the cryptocurrency is no secret to anyone!

For sure, there are opinions that are still against Bitcoin, saying that the technology associated is seen with no physical aspects. But a large sector of influential people is now on another side of their take.

JP Morgan, another famous name now takes the side of investing in Bitcoin after analyzing that the bullish behavior is here to stay. Clearly with time everyone is analyzing the potential these digital currencies hold.

Jay Clayton, Joe Weisenthal, Don Tapscott, Brian Kelly, Mark T. Williams are the famous names of the industry who now agree on the potential this digital gold holds. Even if some of them are not accepting it entirely, but are not opposing it either. They too believe that digital currency will be the future.