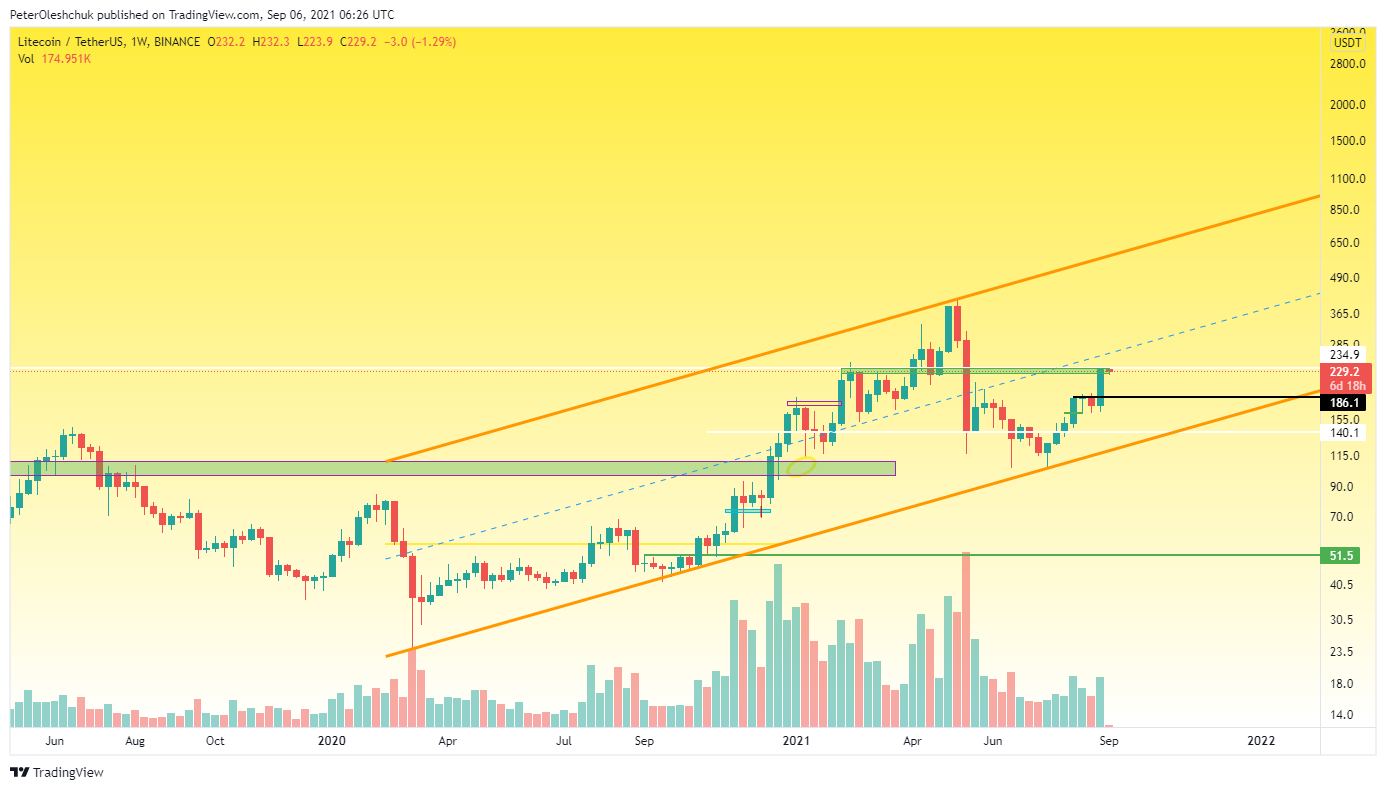 It took almost 2 months for buyers to raise prices to the first critical point of $235. The 125% growth in 2 months, given the weight of the LTC cryptocurrency and its liquidity, is not the worst result. This mark was our main scenario in the previous analysis.

The main growth impulse buyers showed just last week. Closing the weekly candle near the $235 mark, buyers raised the price for the week by 40%. While Bitcoin struggled with the $48,000-$50,000 range, the LTC market wasted no time.

The confident look of the weekly candle predicts the continued LTC price. However, will it be enough for buyers to continue to put pressure on the price without correction? Trading volumes remain average and even given the activity of buyers, the intrigue still exists.

Technical Analysis of LTC on the Daily Timeframe 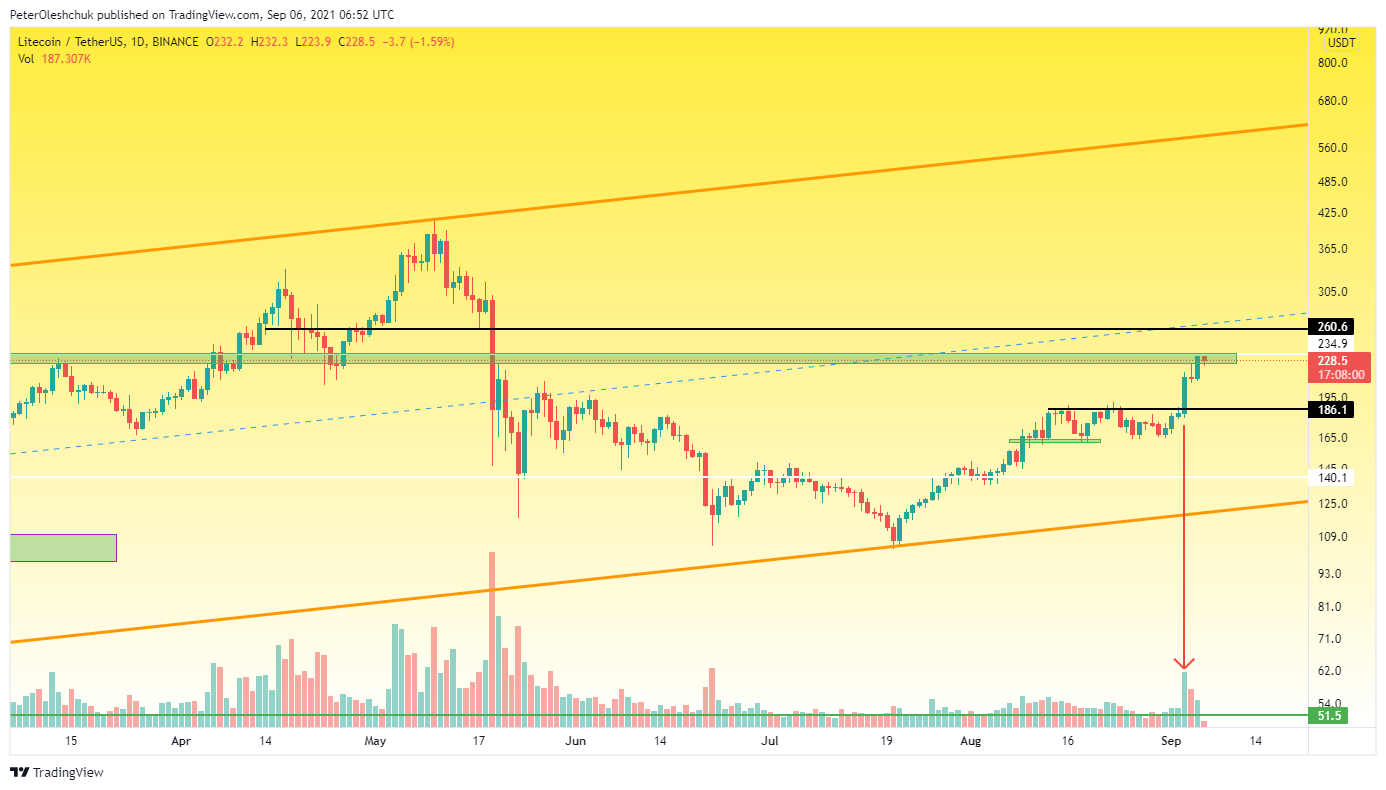 The highest trading volumes last week were recorded on 3 September. It was on this day that the breakout of the $186 local level happened, which kept the growth wave from 13 August. The $225-$235 test took place without the use of high volumes.

However, buyers easily managed to close the daily candle on 5 September without a pin-up. This fact suggests that so far in this range there is no large seller who is ready to keep the price confidently with limit orders. In addition, taking control of the Bitcoin market in the $48,000-$50,000 range adds stability to altcoins, including the top cryptocurrency LTC.

Given this fact, the latest scenario of the LTC price movement is an increase to $260. If sellers start fighting in this mark, we will expect a retest of the $235 mark. In this case, there will be a chance to buy Litecoin with low risks. The critical point of this scenario is the $186 mark. This mark has already confirmed its impact on the LTC market. Fixing the price below this mark will indicate the beginning of a reversal in the LTC market. In this case, the correction in the LTC market will be delayed and buyers will have a chance to show their strength at around $150. 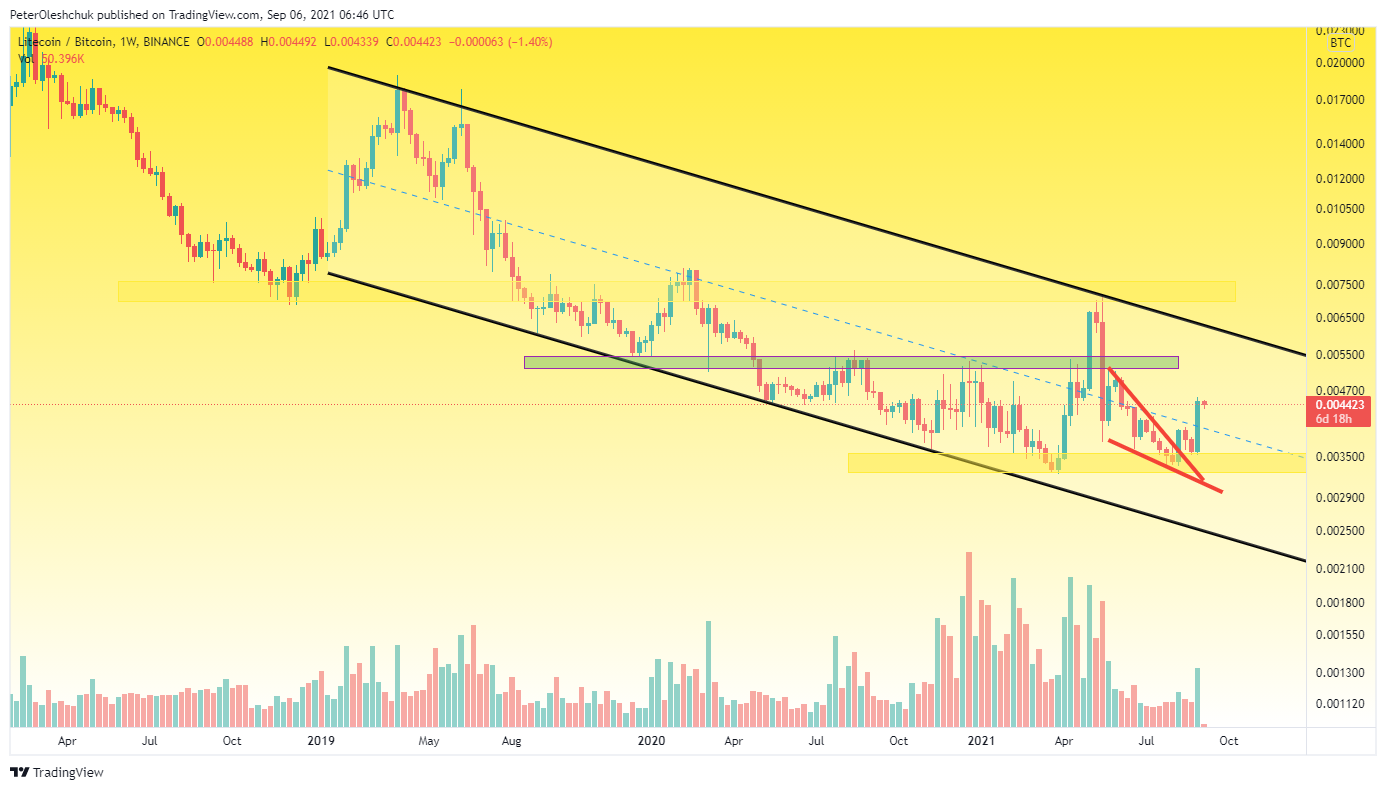 Although, it is too early to think about a negative scenario. Analyzing the price movement of LTCBTC, we can conclude that the growth wave is just beginning. The sellers were able to break the red wedge up, and then withstand the retest of its upper trend line. Last week's candle closed perfectly for continued growth. The prospect of the trend of buyers reaches at least 40% up. Given that the LTCBTC market is still in a global downward trend, we do not hope for a bigger prospect yet.