Some Major Impacts Of Cryptocurrencies In Current Economic Activities

Cryptocurrency has become a new trend in the field of technology due to the innovation it has offered to this world. It became popular in 2008 when the first cryptocurrency Bitcoin was launched by an unknown group called Satoshi Nakamoto. In simple terms, cryptocurrency is a virtual asset that works on a blockchain network. Blockchain is the underlying technology behind every cryptocurrency, and it is the primary reason behind the decentralized nature of these currencies. Cryptocurrencies have been introduced to provide a digital medium of exchange which is beyond the control of regulatory authorities and third parties. After some years when Bitcoin was launched, other cryptocurrencies started coming in the global market. They have also significantly influenced the global economy. In this article, I will tell you a few impacts of cryptocurrencies in current economic activities.

1. A Much Faster And Secure Financial Transaction

2. Cryptocurrencies Have Impacted The US Dollar

The US dollar is considered as the global currency, which means that the US dollar is a currency that is accepted all around the world and acts as a reserve currency worldwide. Due to this reason, this currency has been dominating across the globe. With the introduction of cryptocurrencies into the global market, it has been discovered that these virtual assets have never provided an alternative to the US dollar or any other traditional currencies. This restriction has massively impacted trade, relations and economy all around the world.

3. Elimination Of The Middleman From The Transaction

In general, central banks act as a middleman for the global fund transfer system. This sort of transaction process is somehow a waste of time and money. In that case, a platform which provides the facility to buy and sell cryptocurrencies has provided a secure environment. Also, cryptocurrencies have cut the cost, which is charged during the transactions. With the elimination of middleman or third-party, transactions have become faster than ever.

The adoption of cryptocurrency within a country is determined by the maximum supply that should comply with the growth in the economy. Otherwise, the country might be affected by either price inflation or price deflation. The most crucial advantage of digital currency is that a customer exchanges money from one form to the other.

5. A Growth In Employment Opportunities

It is a fact that during the early stage of implementation of digital currencies, several sectors such as the finance sector and all the other ones in which a third-party is involved could see a drop in employment. This could happen because of the primary objective of every digital currency, which is to eliminate the middleman. As such, employees working in the central bank and the other ones such as lawyers, accountants would lose their jobs. However, the employees which have some experience in the field of technology and analysis could get benefits because cryptocurrency and blockchain technology requires a lot of updation.

The growth in transactional costs results in the breaking of an existing monopoly, and this could bring a positive impact on the global economy. Besides this, de-monopolization would also increase the growth cost of an enterprise and the involvement of third-parties. Cryptocurrencies and blockchain have proven themselves to be an excellent opportunity for small and medium enterprises. A bunch of crypto startups have been launched all around the world, and all of these startups are working very well in the crypto world.

7. A Growth In Demand For The New Products

Although digital currencies could result in a temporary loss of employment in sectors such as banking and finance, blockchain technology could be beneficial for other professionals which come from the field of technology. Also, almost every industry requires the right amount of manpower, which is the primary reason for more job opportunities with the introduction of blockchain.

Some Features Of Cryptocurrencies 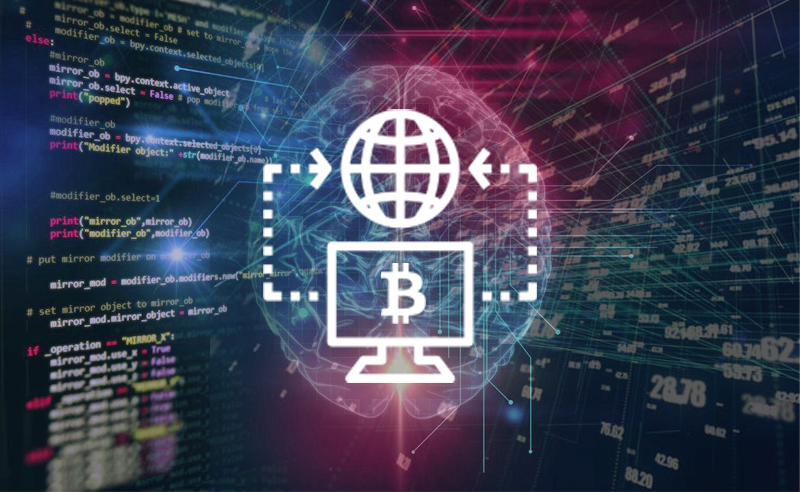 Cryptocurrency is a decentralized medium of exchange which uses some form of cryptographic algorithms to manage financial transactions. These digital currencies use the blockchain technology to achieve immutability and transparency of the transactions. The most significant feature of digital currency is that it eliminates the control of central authorities. This decentralized aspect of a cryptocurrency makes it very much immune to the way the government has been controlling the money.

Cryptocurrencies require public and private keys which are exchanged between the sender and the receiver. The transfer of funds can be completed with minimal expense and in a much faster speed. Cryptocurrencies have been recognized by people all around the world due to some features.

These features are as follows:

After a transaction is confirmed in a blockchain network, it cannot be reversed. Even the miners which are involved in the network cannot do this. This is the way a cryptocurrency works. If you have sent money to any scammer, there is no chance that you will be receiving your funds.

The accounts and transactions that are involved in blockchain or cryptocurrency are never connected with the real-world entities. A user receives cryptocurrencies on the virtual address. This so-called address can be up to 30 characters long. The main purpose of these addresses is to analyze the flow of transactions within the blockchain network.

3. Transactions Are Faster And Cheaper

4. Transactions Are Secure In A Blockchain Network

The crypto funds are locked within the cryptographic system of public keys. The individual who is holding the private key would be able to transfer cryptocurrencies. The complex cryptography is responsible for the security feature of a blockchain system.

5. Cryptocurrencies Have A Permissionless Nature

The Economics Of Cryptocurrency 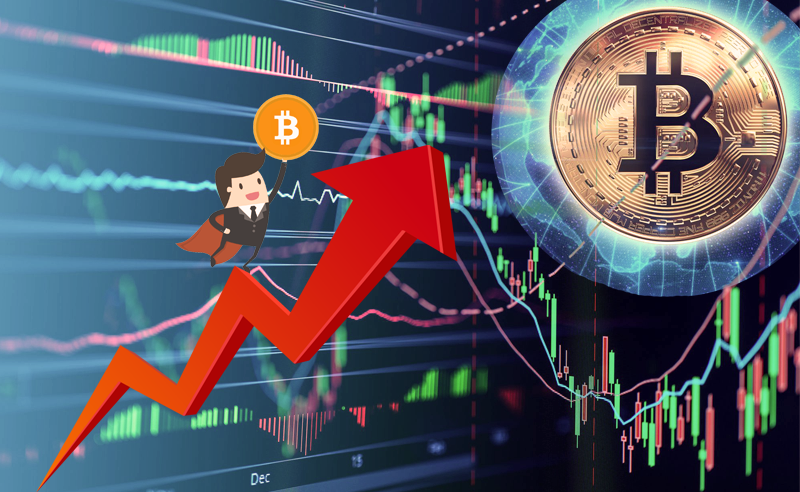 The cryptocurrency economics depends on many factors. The new economy of this world heavily relies on digital payment systems. For example, trades that are done in the form of e-commerce would require the use of cryptocurrencies. In the system of digital payment, the only thing that works is a string of bits. However, this can somehow create a problem. This string could be copied and then reused, which would cause the double-spending problem. Thus, in the future, one issue that cryptocurrency would have to deal with would be the double-spending problem. The economic researches on blockchain and cryptocurrencies have provided a little information so far. Bitcoin has become the most prominent cryptocurrency, and it has gained lots of attention from the time it was launched. This cryptocurrency could have to go through a lot of updations to become a crucial part of the digital economy in the coming years. Other digital assets such as Ethereum, Litecoin, Ripple and many more have also performed well. They have provided additional innovative features besides being just a digital mode of payment. One could expect that these currencies would become the global economy's crucial part if Bitcoin fails to do so. 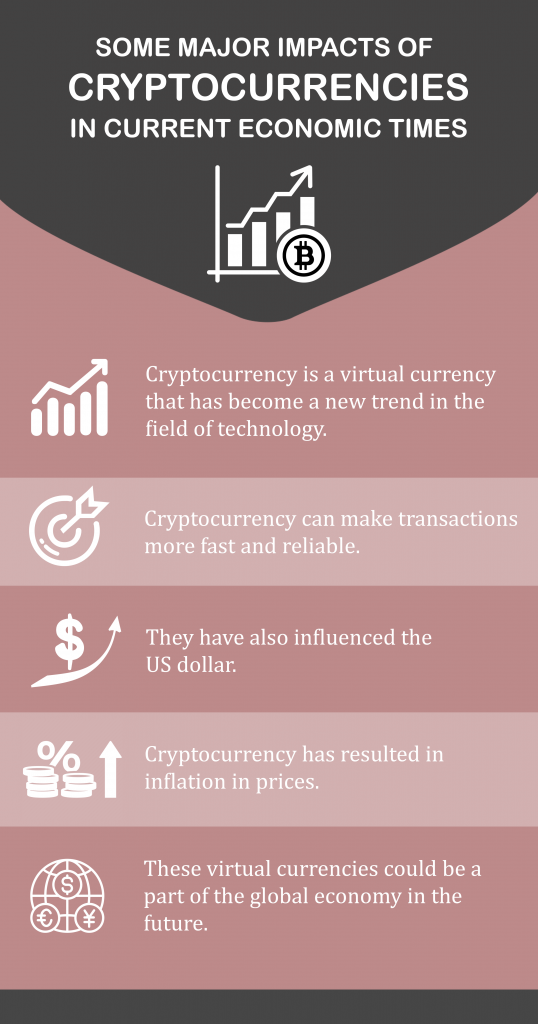 In this guide, I have talked about some impacts of cryptocurrencies in current economic activities. When it comes to the world of crypto, a lot of things need to be understood and made clear. Cryptocurrency is a very new trend in the field of technology, and it could certainly improve in the future. These digital currencies have offered advantages and disadvantages to this world. We have also seen that cryptocurrencies would require several updations if they have to become a part of the upcoming digital economy. Today, traditional currencies are dominating the world. It is very much possible that digital currencies would rule our world in the future while becoming a crucial part in all walks of our life together with the economic activities that exist today.