NFT Trading Volume Triples Amid the Crypto Market Crash in 2021

The entire cryptocurrency market went through a huge correction in the last week. Top digital assets like Bitcoin, Ethereum, Dogecoin, etc. suffered huge losses and left the traders worried. Most of the cryptocurrencies plunged by more than 40% intraday to their lowest prices in months, prompting panic among investors and the crypto community as a whole. And during the volatile condition of the market, one sector fought through and only gained from the market crash. Since the start of the year, the trading volume in the Non-Fungible Token (NFT) industry has tripled.

Besides, despite the unfortunate marketwide fall that wiped more than $1 trillion off the crypto industry cap, the popularity of non-fungible tokens (NFTs) shows no signs of decreasing. The popularity of the Non-Fungible Token (NFT) sector has been increasing for quite some time now. Primarily, tokens like Theta, Enjin Coin, Decentraland, and FLOW tokens have seen some significant growth over the past few months. And most of them continued their steady growth, even when the bear hit the crypto space hard.

“Since the crash that started on May 12, the average trading volume for NFTs is approximately $5.8 million per day. While in the first 11 days of the month, the average daily volume was $14.9 million” - as per a report from DappRadar.

The report also states, despite the market meltdown, users purchased, traded, and sold an average of 85,787 NFTs with a total value of $5.8 million per day, according to the data. It is a 277% increase over January, with an average of 21,815 NFT sales per day.

The market was thrown into upheaval when Chinese regulators declared a crackdown on cryptocurrency. From May 12th to May 23rd, the prices of virtually every crypto coin on the market fell precipitously. During that period, prices were halved. Yet, at such moments, decentralized blockchain apps are extremely useful. Even when centralized organizations like Coinbase couldn't handle the traffic and consumer panic, NFT marketplaces and exchanges like Uniswap kept things running smoothly.

Users shifted to decentralized platforms as centralized systems were unable to handle the additional volume caused by panic trading. While this was going on, Ethereum's (ETH) blockchain was slowing down and gas prices were rising, yet platforms like Polygon, Binance Smart Chain (BSC), and others were able to continue operating normally. 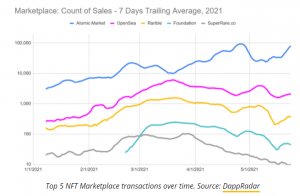 Because of the excitement and success around NFTs, Christie's auction house offered the first-ever sale of an NFT by a prominent auctioneer. Sotheby's quickly followed suit, and since then, a slew of well-known artists and celebrities have begun to offer NFTs. Gary Vaynerchuk, an internet entrepreneur, has even launched his brand with some distinctive components.

Drop in the Ethereum Blockchain Use Due to High Gas Fees

As is mentioned earlier, the increased trading volume caused gas fees to rise on Ethereum Network. However, the rising gas costs did not stop NFT traders, who flocked to alternative blockchain marketplaces such as the Atomic Market on the EOSIO network. It has the highest daily transaction volume of any NFT marketplace, with 20,296 accounts (excluding NBA Top Shot). This caused a major impact on the Ethereum Blockchain.

A good example of this is the growth of the Atomic Market as a premier NFT marketplace. Trading on the NFT marketplace continued even as the native WAXP token's value plummeted. Gas fees affected Ethereum blockchain marketplaces like OpenSea and Rarible, which saw a drop in activity. When gas prices returned to normal, trading activity sprang up again as collectors sought out bargain NFTs.

Non-fungible tokens (NFTs) have gained in popularity dramatically in recent months, from relative obscurity only a few months ago. This has arisen as a result of their widespread use in the transaction of many forms of digital content (including artworks), frequently for outrageous sums. It's difficult to ignore the constant online news stream on NFTs.

And this rise in popularity has attracted many significant investors. Meme.com, a popular social media network, revealed yesterday that it had secured $5 million for a new marketplace dedicated to meme cryptocurrencies and NFTs. Meme.com's developers hope to eventually establish a "CoinMarketCap for memetic content," complete with charts and timelines that allow users to compare each meme and trend. The company already has 7.2 million Instagram followers.

Despite the Crash, the Market is in a Good Position

The price volatility of cryptocurrencies should not be overlooked. The value of tokens was roughly halved. Those associated with NFT projects, such as MANA, AXS, and WAX, have all suffered significant losses in the current crypto meltdown. The fall is terrible news for newcomers to the market. Taking a step back, however, we could see that token prices have risen by 300 to 800 percent since January of this year.

And Bitcoin, the world’s largest cryptocurrency, has already started to recover. The cryptocurrency market cap has recovered $600 billion since its bottom on Sunday when Bitcoin surpassed the $40K mark for the first time in five days. It took Bitcoin five days to rebound from its deep lows and bring the overall market cap back into the green.

NFT Network to Exclusively Expand in the Future

As more prominent names dip their toes into the water, digital artists, collectors, and investors will continue to fuel huge growth in the NFT token ecosystem. The ability to decentralize the place will open the door to new and exciting ways for artists and collectors to engage. Purely by widening the desirability, availability, and scalability of assets that can be bought, traded, and discovered by a far larger spectrum of collectors, these new social networks will become more valuable than the traditional art sector over time. We may expect the current application of NFTs that enhance the gaming experience to grow in popularity.