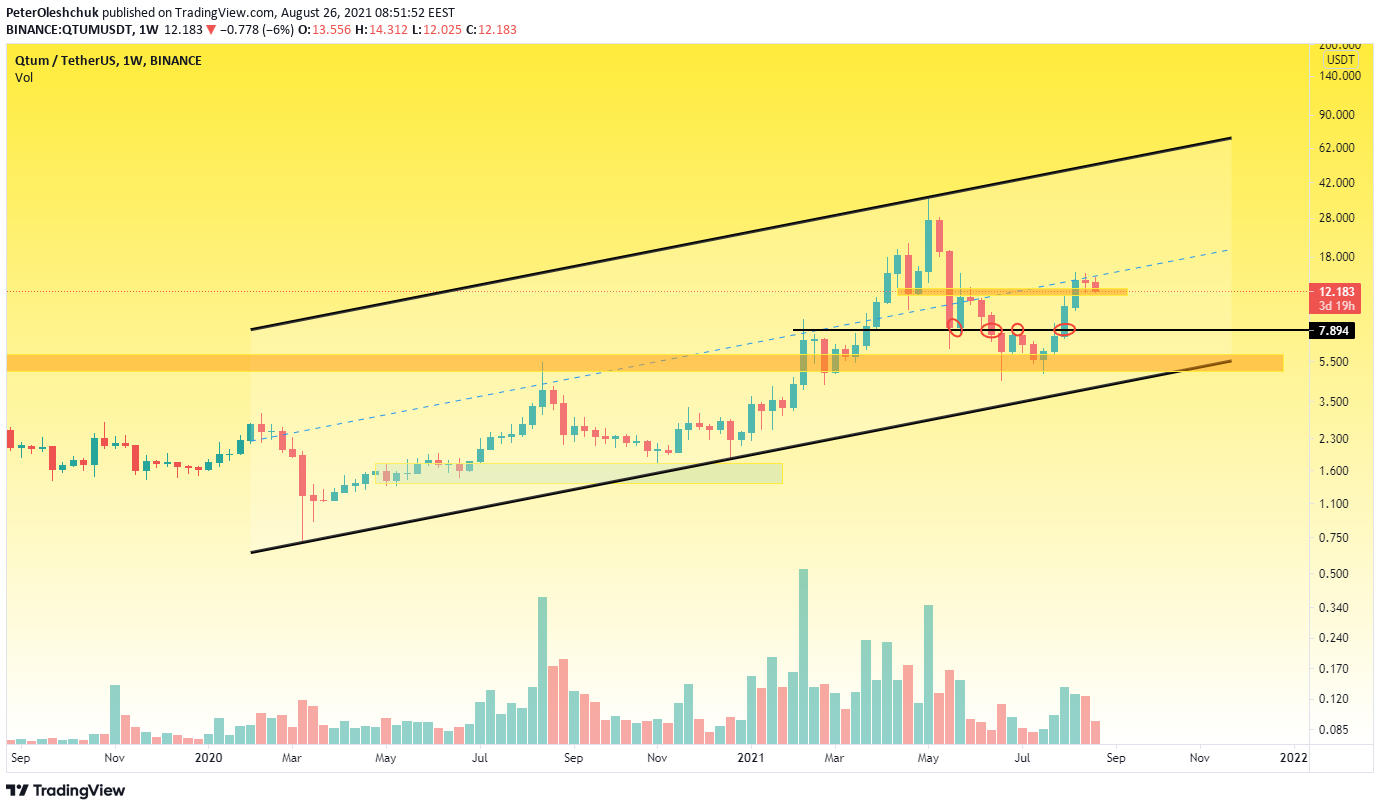 Three trading weeks on the QTUM market flew by very quickly. It's all about market participants who actively pushed the price up to and won the critical range of $11.6-$12.6.

In three weeks, the QTUM price has risen by 70%. The nature of the growth showed the strength of buyers and their ambitions to continue growing. Buyers did not allow the QTUM price to arrange a correction. The whole growth wave was built on one scenario - the growth impulse on increased volumes, and local consolidation.

In this way, buyers broke the $11.6-$12.6 range on 13 August and are still trying to fix it above this range. In the previous analysis, we predicted a test of this range and today it's time to set a new target.

Technical Analysis Of QTUM On The Daily Timeframe 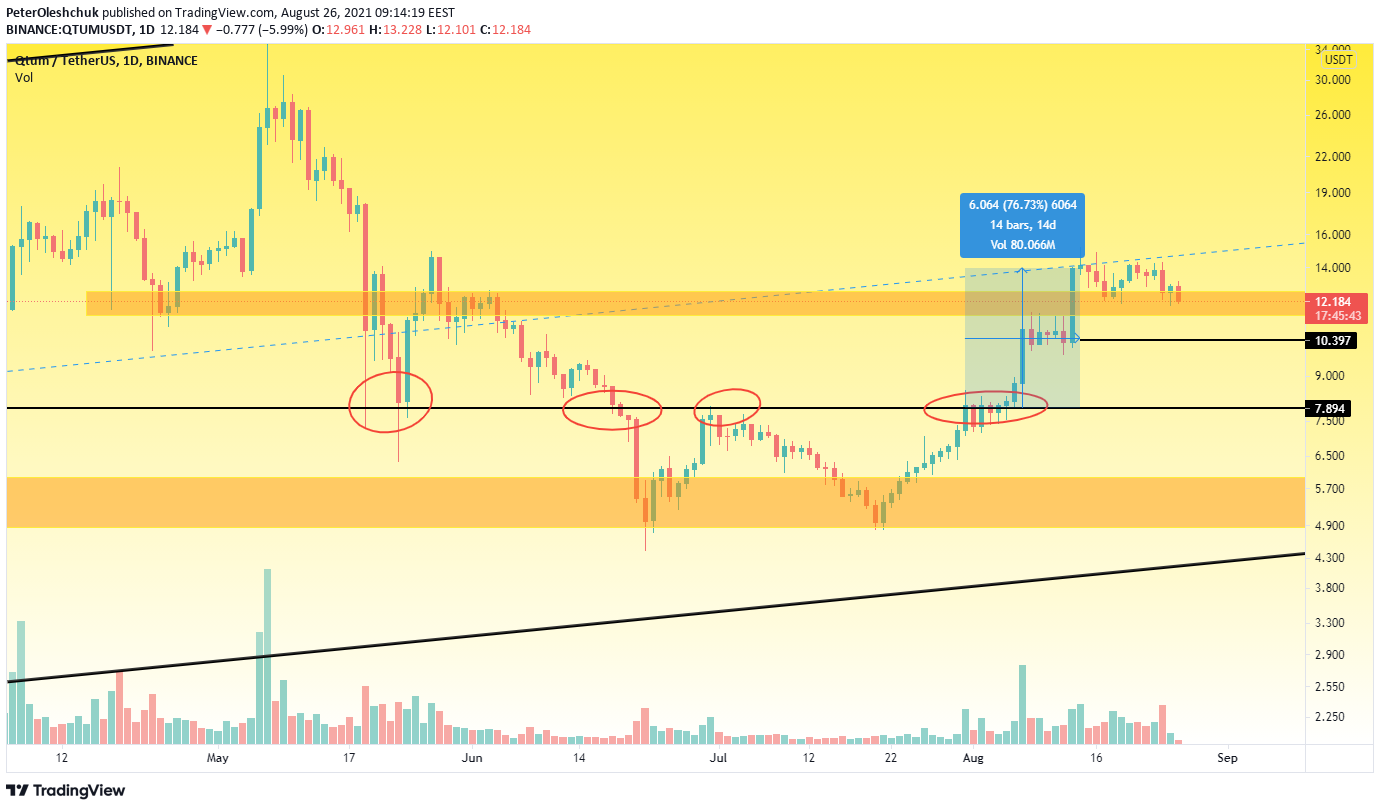 After an unsuccessful attempt by buyers on 20 August to update the local high and continue the growth trend, sellers actively joined the game. On 24 August, sellers lowered the QTUM price by 7% in relatively increased volumes, causing buyers to worry again. In turn, the BTC market, which has begun its correction and is trying to go beyond the consolidation wedge, played a role in such a movement.

The unpleasant fact is that after the aggressive attack of sellers on 24 August, buyers the next day did not show their strength. The next daily candle closed in low volumes and without many rebounds of the QTUM price. If such situations happen in the liquidity zone - we should expect trouble.

Given the Bitcoin trend to continue declining, the probability of a return of the range of $11.6-$12.6 by sellers is quite high. In this case, we will expect a test of the $10.4 mark. In this mark on the daily timeframe, we see local consolidation and the beginning of a new growth impulse.

If buyers have plans to continue the uptrend with a final target of $27.5, they should retain control of the $10.4 mark. Otherwise, the correction in the QTUM market will be delayed. 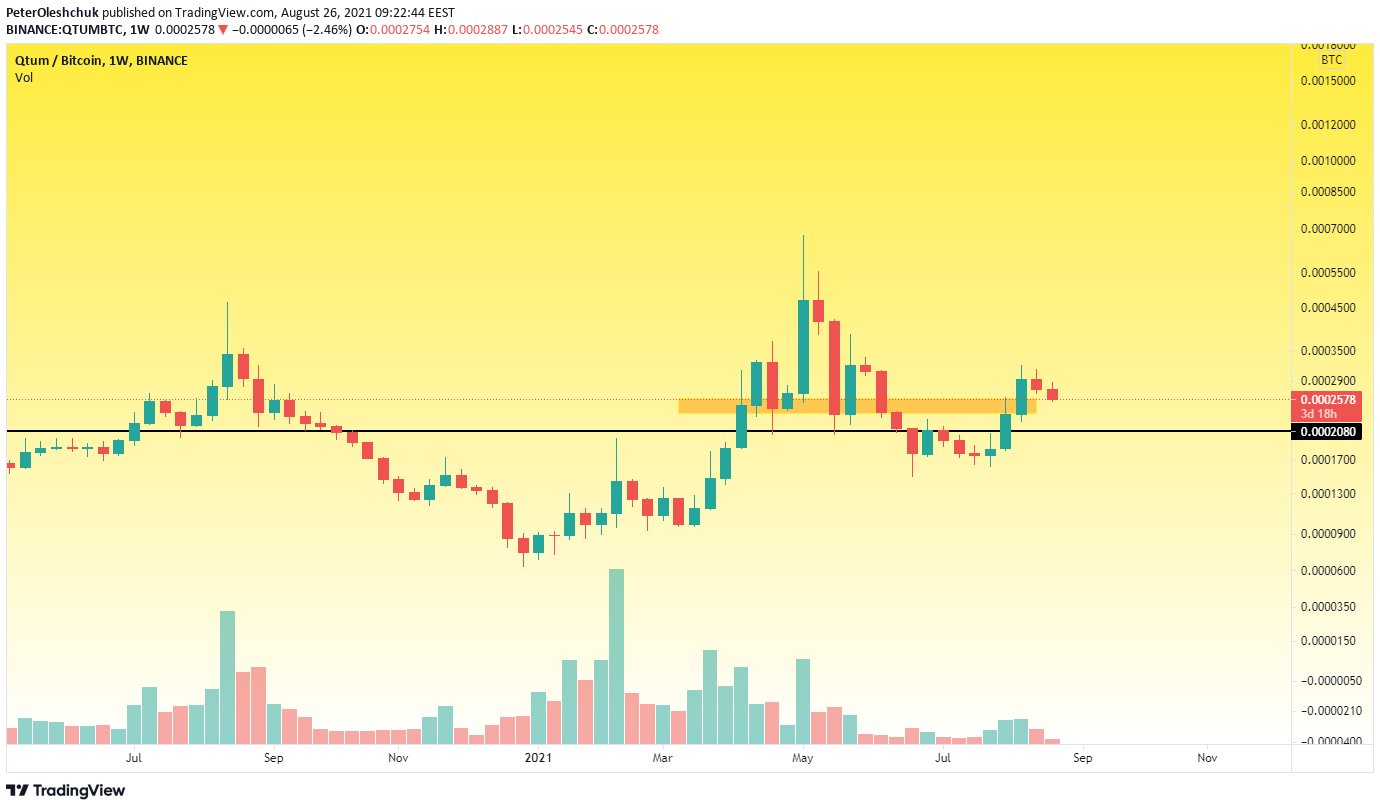 Analyzing the QTUMBTC chart, we understand that the situation does not look so sad. After the local growth wave on 26 July, sellers are not aggressive. Trading volumes during the fall are low, and the weekly candles are no longer as aggressive as they were in May.

Thus, the main growth scenario remains the main one and for full confidence, buyers should be fixed above 0.0002413. If the pressure of sellers increases, the last chance for continued growth will be around 0.0002080.