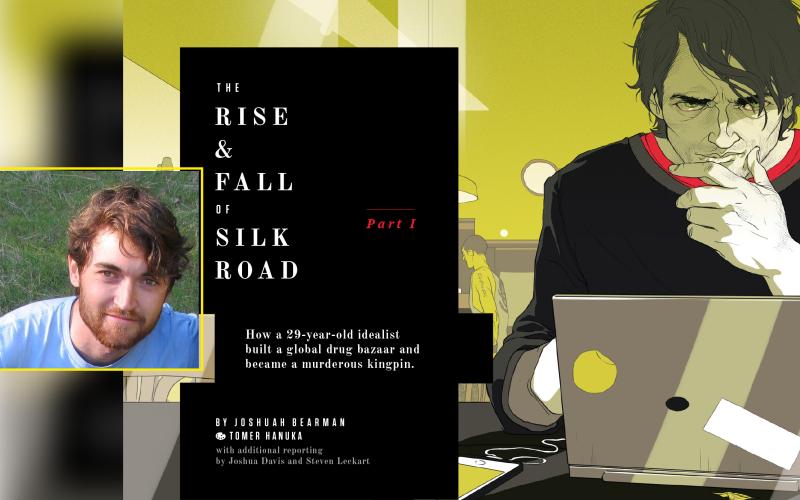 Ross William Ulbricht has been serving a double life sentence plus 40 years, without any parole for developing a site named Silk Road, which hosted money laundering activities and illegal drug transactions.

Since forever, Ulbricht was very eager and passionate about free markets and privacy, that’s why 10 years ago when he got a chance to get deep into this privacy factor, he developed this marketplace.

Although he never hurt anybody violently, neither did he sell drugs nor any other illegal items by himself, still the Manhattan federal jury announced such a tough punishment for him.

Ross The Entrepreneur And Not The Computer Programmer

Ross took a bachelor’s degree in Physics from the University of Texas, Dallas and the did a master’s program in material science from Pennsylvania State University. That was the time when his interest in the Libertarian view of economic theory started growing and became the supporter of political philosopher Ludwig von Mises.

After his graduation as he started his business but initially, he was not successful. Then, he joined some companies and tried his hands in trading and developing games.

Later, he established a company to sell books online and during that time, he thought of developing an online marketplace via TOR encryption and Bitcoin.

Without analysing, the future results of the online marketplace, Ross started working on it. He thought the Bitcoin and encryption would help users of the site by providing them anonymity and security, without government’s interference.

Ulbricht who was popular as Dread Pirate Roberts in the online world founded Silk Road in the year 2011. He initially, was persuaded with the conversation, he saw on Bitcointalk forum, where the libertarians shared their views on Bitcoin.

He decided to develop a website named Silk Road for the people so that they could voluntarily buy and sell the products of their choices and that too without the interference of the government.

In its initial time period, the marketplace maintained a very low profile, among outsiders. Apart from a few libertarians and thinkers, none of the people knew about this marketplace. It was that time only when the Silk Road marketplace processed around 1.2 million transactions.

Soon after that, media shifted its focus towards this website, which grew the government’s interest in it, therefore, the government started keeping an eye on every movement of the website. Later, when the government get to know about some illegal activities, it ordered DEA and FBI to shut down the doors as well as bring the proprietary of Silk Road to justice.

The first convict of the crime related to Silk Road was an Australian drug dealer and then the government agencies get their hands on every convict who was dealing in any illegal activity through this site. By the end of the year 2013, the FBI arrested Ulbricht also, despite knowing that he just developed that site and never participated in selling or purchasing of illegal products. However, Ross faced seven charges in Manhattan court and a ‘murder-for-hire’ charge in a Baltimore federal court.

During his trial in Manhattan federal court, it was reported that presumed Silk Road supporters were threatening the presiding judge in the case but no one knew, how much in this was the truth. Because to date, it has not been proven.

Ulbricht, who developed the Silk Road to help people, after receiving life imprisonment wrote a letter to the court, stating, “Silk Road was supposed to be about giving people the freedom to make their own choices, to pursue their own happiness, however they individually saw fit. [It] turned out to be a naive and costly idea that I deeply regret”.

However, the other convicts who actually were involved in illegal activity through the marketplace didn’t receive sentences above 10 years. Even the creators of Silk Road 2.0 which is a replica of the original one, were also not given any harsh punishment.

Since the day, he was put behind the bars not only his family, his prosecutions and media’s deception came in support of Ulbricht. They even filed an online petition for in his support so that the court could either release him or lessen his punishment.

Since childhood, Ulbricht has been very compassionate and loving. Even this time, when he is serving the sentence, he has been following his non-violent principles in the prison.

Despite getting involved in any violent activity, no matter it risks his life, Ulbricht focuses on teaching his mates in prison and helps them earn GED so that after leaving the prison they could join a college.

Michael Van Praagh who is a fellow prisoner and student of Ross, wrote a letter to the judge, regarding his behaviour in jail, and sated, “Mr Ulbricht sits with the four of us every single day and we’ve made such great progress…He does all this without any expectation of something in return. It is solely to help others…His kindness and devotion to excellence have truly inspired us all”.

These are some small contributions Ulbricht made to the society, but his one fault .i.e., developing a Silk Road marketplace, destroyed all his life.

Ross wanted to develop a site which could be like Amazon.com, he created it but because of that now he has to serve two life imprisonment plus 40 years behind the bars. Although Silk Road became Darkweb Marketplace for illegal activities and drugs, it is true that Ulbricht was never involved in any kind of these activities. Ulbricht has never tried to sell any illegal product or buy any illegal product from the site.