Setting Up a Private Network In Ethereum

Do you want to be a dApp developer or just learn how Ethereum works out of curiosity for blockchains? Well, you are at the right place and right time of course. Blockchain developers are an escalating demand. The gaining popularity of Ethereum and other blockchains has created job opportunities for trained blockchain developers more than ever. It is the best time that you attain the right skills and prepare yourself for the ample opportunities out there.

In this tutorial, we will cover how to set up a private Ethereum network. You would require one or more systems with Windows 10 and you are good to begin. But first we will look at what a private network is.

Why set up a private network?

First step would be to download one of the standalone clients of Ethereum. We are using Go Ethereum for this tutorial. It is one of the three original implementations of the Ethereum protocol.

Download Geth 1.9.25 for Windows (latest version at the time of this tutorial). Run the executable file and you will have the ethereum source code installed on your system.

Next you have to create a Genesis block. It is the first block of the blockchain. The other networks already have a genesis block and it is downloaded when you sync their blockchains. But here we are setting up a private chain and we have the responsibility to begin our blockchain by creating a custom genesis block file.

Create a file- makeGenesis.json and save it anywhere. 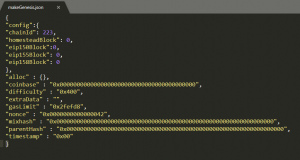 Contents of a genesis block:

homesteadBlock- set to 0, means you will be using the Homestead release of Ethereum.

eip150Block, eip155Block, eip158Block are not relevant for a private network. These are some EIPs introduced for the safety of the main network.

alloc- set of pre-filled wallet addresses to allocate ethers. It is kept empty here in a private blockchain.

coinbase- a wallet address to which all ethers (reward+transaction fees) collected from successful mining of this block goes to. It can be set to anything in the genesis block of a private blockchain.

difficulty- it is the difficulty level for finding nonce to discover this block. Higher difficulty means more calculations required to create a block. Set it to a low value to ensure blocks are mined quickly on a private blockchain.

gasLimit- it is the maximum amount of gas that can be used in each block. It signifies the maximum number of computations any block can support. Higher value effectively means more transactions in a block.

nonce- a 64-bit hash value when combined with mixHash, proves that a sufficient amount of computation has been done to create this block.

parentHash- a 256-bit hash of the parent block’s header. It points to the parent block to effectively build the chain of blocks. As this one is a genesis block, it is set to 0.

timestamp- time at this block inception. It is the output of Unix time function. Allows to verify the order of blocks within the chain.

Next, create a folder as an Ethereum data directory. It stores wallet files and blockchain data. If not specified its default location is %USERPROFILE%\AppData\Roaming\Ethereum.

This command creates a genesis block and the following files and folders in the data directory: 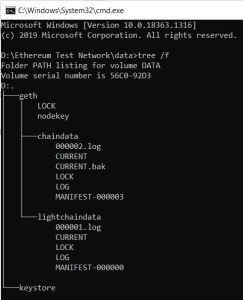 To begin using Ethereum, you will have to create an account. This will be your Ethereum address which you can use to interact with other users on this private network.

The private key corresponding to this account is stored in keystore. You can check it in the keystore folder:

Now you have started your blockchain and created an account. Try creating other accounts as well. To interact with the blockchain, open geth console:

Use flag --nodiscover to disable the peer discovery mechanism for now.

You can try various commands in the geth console:

Right now you have an account with 0 ether balance. To obtain some funds, you can mine new blocks on this blockchain:

You would observe some blocks being mined. Check block number using eth.blockNumber

To send ethers to any other accounts, you would have to unlock your account:

To send ethers from one account to the other:

Provide parameters like from, to and value. Any transaction in ethereum is carried out in wei (a unit of Ether, 1 ether = 1018 wei). You would have to convert ethers to wei using web3.toWei() function.

It returns a hash of the newly created transaction.

After mining, observe that a block with your newly created transaction has been added to the blockchain. Check account balance to ensure ethers have been transferred.

To get txn details from the hash of transaction, use:

Here from, to, value are details of the transaction. Nonce is a number of confirmed txns sent from this account previously. V, r and s are the details of digital signature of the account holder sending this transaction.

Here, we are creating a node on the same system. We are using a new data folder to store the local copy of blockchain. It uses the same genesis block to point to the same blockchain:

Start the first node by providing its network id which is the same as the chain id specified in the genesis block:

Open a new command prompt to start the new node:

Note that this new node is not synced to the current state of blockchain. So we will have to add peers to sync.

To add this new node as a peer to the first node, get node information:

enode uniquely represents each node and provides its ip and port information for connecting it with other nodes.

On the geth console of the first node, add second node as its peer:

Now the two nodes have become peers and the new nodes syncs up the blockchain using the first node. You can create any number of nodes and set up Ethereum accounts. In the next tutorial, we will learn how you can develop and deploy decentralized applications on this private blockchain.