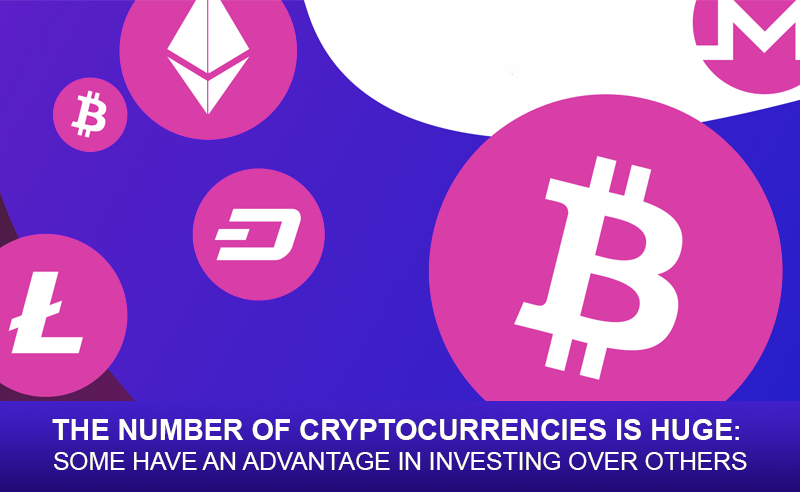 The Number of Cryptocurrencies Is Huge: Some Have an Advantage in Investing Over Others

Today, only a few question the survival of the cryptocurrency markets. They are developing unstoppably despite concerns about strong turbulence. There are already hundreds of different cryptocurrencies out there and their number continues to grow. This can be a double-edged sword.

It creates headaches for people trying to choose the best currencies to invest in. What’s appropriate to do is to consider several key factors such as market value and volume of purchases. Following them, we discover that a small number of cryptocurrencies occupy the vast majority of this digital ecosystem.

Bitcoin is the original source of all cryptocurrencies and many other crypto networks have emerged from it. We’ll focus on 3 main options and explain their specifics.

Bitcoin is still the leading cryptocurrency when it comes to market value. It’s also a market pioneer, the first virtual money to be created on a peer-to-peer network. The first coin was mined in 2009. The next 10 years were marked by many ups and downs in value.

Today, despite this turbulent history, Bitcoin still enjoys the trust of users. Its volume of daily purchases in March this year, despite the global coronavirus pandemic, amounted to over 48 billion US dollars. If you don’t know yet, this is how to buy Bitcoin. People are still happy to send this currency from one digital wallet to another.

Ethereum is one of the main competitors to Bitcoin. It was created in 2015 with the idea of creating a platform that would use a common language for writing scripts. What emerged from this significant innovation is the creation of decentralized applications (DApps) and smart contracts.

READ  A comparison between Kraken vs Coinbase

By the time Ethereum was launched, 11.9 million coins had already been mined, which is 13% of the maximum amount that can circulate. This initial success didn’t prevent this cryptocurrency from being divided into two parts in 2016: Ethereum and Ethereum Classic. The first records an impressive $ 23 billion in daily purchases, which is significantly more than the Classic version. The value of 1 Ether is $ 239.69.

Ethereum is also very popular among entrepreneurs from various sectors of the economy and in the business world, in general.

Litecoin was launched by a former Google employee in 2011. This cryptocurrency is a branch of Bitcoin that has brought several innovations. Namely, it increases the upper limit of coins in circulation. More importantly, it shortens the block creation time. The currency also uses a different script-based algorithm.

That’s why Litecoin was nicknamed the “silver of the crypto world”, a world in which Bitcoin is certainly gold. Many users have joined this global transactional system over the years. It isn’t managed by any person but by a script and its decoding depends on the computer power of the network. This arrangement, which is based on blockchain and public ledger technologies, brings faster verification of transactions.

READ  The Difference Between POW And POS Blockchain Protocols

In terms of daily shopping, Litecoin lags behind heavyweights such as Bitcoin and Ethereum. The price of 1 Litecoin equals $ 44.76. Its future, however, seems bright, as an increasing number of sellers begin to accept this currency.

Other cryptocurrencies to consider for investing are: