The cryptocurrency market is getting intensely crowded. With the global crypto market cap reaching $1 trillion, it looks like the crypto battlefield has just begun. Over the past few years, one can see institutional investments raining over the crypto industry and pushing demand for blockchain technology even further. The crypto space is hence witnessing a steep increase in attention from various places like governments, banks, and other financial institutions. In fact, the increase in investments from financial institutions has a major role to play in the global market cap of cryptocurrencies reaching $1 trillion.

Crypto and Financial Institutions- It Takes Two to Tango

Today, the top players of the world are betting on crypto and blockchain technology. It looks like investments are focused in that direction. Having said that, let us first understand the role of institutional investors in the crypto space and vice-versa.

The year 2020, was meant to be the year for crypto, and it did not fail to prove it. The crypto industry boomed immensely in 2020. Thousands of businesses went decentralized. In 2020, developers made many instruments that would run with anonymity on the computer and would be free to access. And DeFi made this possible. This led to Ethereum’s price to increase steeply. It crossed many milestones and is soon expected to reach its all-time high in 2021. Seamus Donoghue, METACO’s VP of sales and business development, has recently admitted that many regulatory barriers between the crypto industry and institutions broke down globally in 2020. He also said that crypto regulations have impacted the industry and that the changes brought, have benefited the institutional investors to a very great extent.

Why Are These Institutions Giving a Hoot about Cryptocurrencies?

It was reported that, by the end of 2020, almost 800 institutional investors will own 36% of crypto assets. In another report by insurance company Evertas, it said that “90% of institutional holders of crypto assets expect to invest even more in Bitcoin in the years to come.” So why such increased attention from financial institutions for the crypto space suddenly? One of the top reasons is that these institutional investors believe, “holding BTC might prove to be less risky than not having Bitcoin exposure at all.”

Apart from this, the Office of the Comptroller of the Currency (OCC), recently adopted cryptocurrency and implemented some notable Cryptocurrency Guidance for Banks and the future of payments. Adaptations like these give big hopes to institutions and they end up accepting the industry.

Top Financial Institutions Which Supported and Invested in Cryptocurrencies

JPMorgan is one of the institutions that has changed its opinion regarding cryptocurrencies, especially Bitcoin. JPMorgan Chase CEO Jamie Dimon used to call bitcoin “a fraud” in 2017. The bullish nature of Bitcoin made JPMorgan go from completely opposing the idea of digital currencies to provide banking facilities to crypto exchanges. The banking giant recently predicted that Bitcoin’s price can go over $146,000. Strategists led by Nikolaos Panigirtzoglou said that cryptocurrencies will get immense popularity and Bitcoin will soon become an alternative to gold. 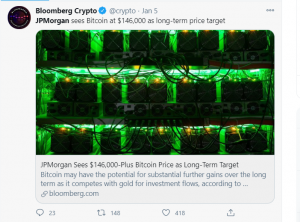 The multinational banking giant has also started to accept Bitcoin Businesses for Banking Services. Coinbase and Gemini, are two mainstream crypto exchanges that have become banking customers of JPMorgan Chase.

Back in 2020, Square’s $50 million investment made JPMorgan say it is a “strong vote of confidence for the future of bitcoin.” And according to an article in Bloomberg, JPMorgan said that gold will suffer a lot in the future because of Bitcoin. This statement clarifies how influential Bitcoin has been over the past few years.

JPMorgan also is the first U.S. bank that created and successfully tested a digital coin representing a fiat currency. JPM Coin is based on blockchain technology and enables instant transfer of payments between institutional clients.

“We’ve started to see participation not just from the hedge fund segment, which we’ve long seen participation from, but now it’s recently from other institutions, pensions, and endowments.”

Grayscale is one of the institutions that hold immense assets under cryptocurrencies. According to a tweet, the firm now has $27.5 billion in assets under management. 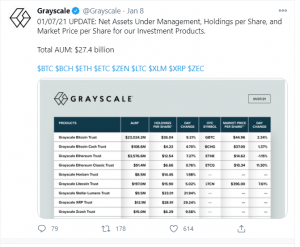 “We’ve started to see participation not just from the hedge fund segment, which we’ve long seen participation from, but now it’s recently from other institutions, pensions, and endowments. [...] The sizes of allocations they are making are growing rapidly as well.”

Grayscale can be rightly called the center of the Bitcoin buying spree, which holds about 3% of the overall BTC in circulation. The firm continues to acquire large positions in digital assets.

This one is among the big names in the institutional investments sector of the crypto space. The company in December 2020, declared that it is raising more money to buy more bitcoins. MicroStrategy announced over $1B in total Bitcoin purchases in 2020. The business intelligence firm now holds 70,470 BTC worth over $1.596 billion in its reserve. CEO Michael Saylor said that the firm has spent $1.125 billion in Bitcoin to date, at an average price of $15,964 per bitcoin. 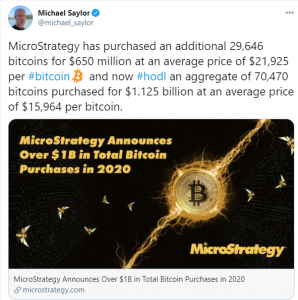 “The Company continues to believe bitcoin will provide the opportunity for better returns and preserve the value of our capital over time compared to holding cash.”

While supporting cryptocurrencies Blackrock’s chief investment officer, Rick Rieder, recently said that cryptocurrencies are here to stay, and Bitcoin has the potential of replacing gold in the near future. Blackrock, the world’s largest asset manager, has more than $7.4 trillion assets under management as of September 2020. Rieder said:

“I think digital currency and the receptivity — particularly millennials’ receptivity — of technology and cryptocurrency is real. Digital payment systems are real, so I think bitcoin is here to stay.” 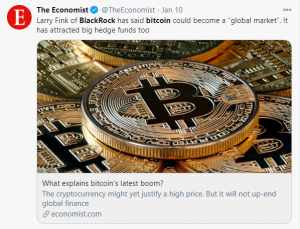 Moreover, the company has recently posted a job vacancy for a New York-based VP of blockchain to help with the company’s crypto-related assets and offerings. With this, BlackRock tries to meet the growing demand for cryptocurrencies.

MassMutual is an insurance giant that recently bought $100 million worth of bitcoin. In a press release, MassMutual mentioned:

“The investment gives  a measured yet meaningful exposure to a growing economic aspect of our increasingly digital world." 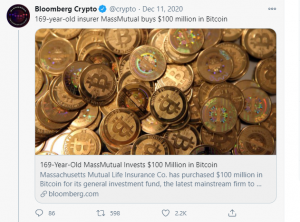 This investment marks the entry of a prudent investor into the volatile market. This has opened doors for many insurance companies to invest in Bitcoin and is a big step to spread awareness about the world of digital currencies. "MassMutual's Bitcoin purchases represent another milestone in the Bitcoin adoption by institutional investors,” wrote a team of strategists, including Nikolaos Panigirtzoglou, an analyst at investment bank JPMorgan.

SkyBridge Capital, which is a leading global alternative investment firm, has announced the launch of the SkyBridge Bitcoin Fund LP, earlier this year. It will provide mass-affluent investors with an institutional level platform to gain exposure to Bitcoin. SkyBridge is one of the most reputed and well established financial institutions to launch a Bitcoin fund. SkyBridge has invested $25.3 million to launch this Bitcoin fund. This Bitcoin fund will provide traders to buy and sell Bitcoin in a very easy and secure way.

"We believe Bitcoin is in its early innings as an exciting new asset class. With the institutional quality custody solutions available today, we believe the time is right to allocate capital and provide our clients access to the digital assets space."

Today, this Bitcoin Fund’s assets under management have risen to $310 million. 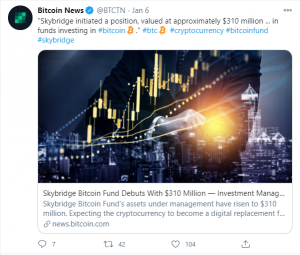 However, with the increase in investments by big financial institutions and companies, there is something more than crypto investors should look out for. According to the statement from crypto-analyst Lark Davis, these big and powerful players are manipulating the market. They first make a change in the market through massive selloffs and short the market immediately. This makes the price to plunge, inducing investors to use the opportunity. And they end up buying Bitcoin from panic sellers at a much lower price. Therefore, there is a huge difference between what they say and what they do.

The blockchain and crypto industries have owned the recognition in the year 2020, with so many hands of powerful investors, it is a clear sign that they are here to stay. Moreover, Ripple has made projects that are replacing the traditional banking infrastructure with blockchain. Several new platforms and services that emerged in the crypto space are catering specifically to the institutional investors’ crowd. All in all, institutions have recognized the potential of cryptocurrencies and they are warming up for a better future where cryptocurrencies are important assets. And this involvement of prominent institutions sketches a promising and bright future for the world of cryptocurrencies and blockchain.