What is Sidechain Off-Scaling Solution?

To put it simply, a sidechain is a separate blockchain that is pegged in some ways to the main blockchain, and both the main chain and sidechains are interoperable.

The Mechanism of Sidechains

Suppose Alfa wants to exchange her bitcoins for the equivalent units. Let's call the exchange units side coins. With sidechains, one can easily perform specific tasks on a specialized platform. You can think of a child chain to get the idea of the sidechain. Rolling with the parent or main blockchain is the child’s analogy, where the child chain has enough resources to do some house chaos.

In order to make the transactions on the sidechain, Alfa needs to send a request for exchanging her Bitcoins to a predetermined address. This address will then credit Alfa’s sidechain with 5 side coins. After successfully receiving 5 Bitcoins from her on the main blockchain, the protocol will automatically credit the side coins. The successful completion of payment is authenticated by the software. 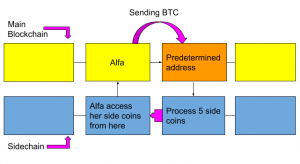 The best part of using the sidechain is that the process is reversible. Alfa has converted her Bitcoins into side coins, but she can always reverse the process.

The benefit of doing transactions on a sidechain is that now she is free to transact on a separate sidechain. The transaction will be made in terms of side coins just like the way she used to do on the blockchain.

Why are SideChains Used?

The most obvious question that can come to your mind is why Alfa didn’t use the Bitcoin blockchain. The reason is, the sidechain is capable of doing the things that Bitcoin can’t do.

While Bitcoin is the most secure currency to trade in, it is not the best in terms of trading.

On the other hand, sidechains are not bound by these rules. In Fact, they don’t use the proof of work to function. One can enjoy services like

Interestingly sidechains cannot affect the main blockchain which provides users a platform for experimentation. There is no need to store every transaction made on the sidechain network. Alfa might have done hundreds of transactions and exited the sidechain. But on Bitcoin blockchain, it shows only two i.e. one to enter and one to exit.