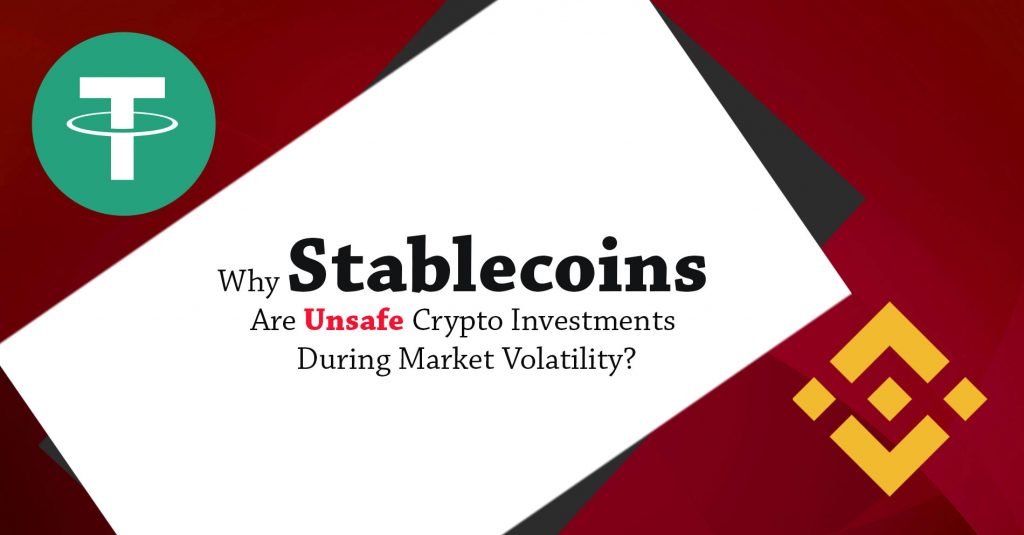 Why Stablecoins Are Unsafe Crypto Investments During Market Volatility?

For years, it has been noticed that many economists have expressed their views on crypto investment as ‘safe haven’ during times of financial turbulence. And up to some extent, their opinion has really proved to be true. Cryptocurrency does have the potential to grow when the economy seems to be going down, which breeds fear among the people about the safety of their financial condition. If you haven’t been abreast of cryptocurrency regulation news>, then you might not be knowing about the crisis which hovered Venezuela in 2019. Experiencing an economic crisis, the country promoted its citizens to make Bitcoin as the best choice for investment. The wave of Bitcoin’s popularity even got spread to Iran after the death of Qassem Soleimani. But what if someone suggests you invest in stablecoins during times of market volatility? Then would you really get ready for it? If you think yes, then think again. It is because stablecoins are unsafe during market volatility.

The current year 2020 too came up with such a big danger in the form of COVID-19, which has taken the lives of people globally. There is hardly any sector left that has gone unaffected by this uprising virus. It has affected so many businesses, startups, and other industries. But amid this crucial phase, economists are confident about the crypto rush, and that too on the international level. However, there have been no such positive results to be predicted. When it comes to comparison between stock markets and the cryptocurrency market, then the latter has been beneficial to the other. Also, in the last few weeks, stablecoins have proven their mettle with growth. There has been no such report of a massive leap of Bitcoin on higher that would prove its worth at the time of uncertainty. This made investors pulling off their trust from Bitcoin, which they considered to be a safe haven during times of financial difficulties. Seems Bitcoin too could not save itself from the clutches of Coronavirus. But according to some experts, diversification is the best solution to save one’s financial health from the economic crisis.

Why Stablecoins Are Unsafe Crypto Investments

Now we take you to stablecoins, which were supposed to be launched in providing investors with a medium to storing value amid dwindling situation of the markets which are not stable. Stablecoins were expected to become a better alternative for Bitcoin in a volatile state, and they succeeded, though partially. In fact, if you compare stablecoins with other digital currencies, then you will know that stablecoins truly justify to their true name, which means stability. But reality came totally opposite, when a financial expert, clarified that stablecoins are unsafe and are only by their name, but are not stable actually. The reason lies in the flaws of its fundamentals and design. These coins got pegged with other commodities like oil. The pegging of stablecoins put a question mark on their stable status.

The reason why people look for cryptocurrencies for investment is that they want to move out of the central bank’s control. The economic decisions made by central banks have something which serves their own personal motives. They are more inclined towards political and economic interests more than the economy worldwide. But it was hardly expected about stablecoins that depended on commodities or single currencies, are still adhere to central banks’ decisions. People who still consider stablecoins as the mode of investment are living in the wrong notion. No doubt, there are coins like Pax and Tether, that proved their stability. But who knew that a monster in the form of Coronavirus would dampen their continuity. Another major currency like the Euro is too dampened with problems related to destabilizing.

All these reasons states about the fact that stablecoins are unsafe and people must stop relying on them as an investment asset, especially when the cryptocurrency market is down sliding. Another reason which has added fuel is Coronavirus, which has dampened the global economy and health of people worldwide. Stablecoins which were depended on individual currencies and commodities too follow the decisions of central banks that focus more on local economic and political interests above the interests of the global economy. Diversification of the investments is the only way out to save yourself from risks. Start following all crypto news to update yourself.