ADA Surged by Approximately 11% in the Past Week - Technical Analysis

Cardano is a blockchain network that fosters innovation by providing a robust platform for building decentralized applications. It is highly secure and is a proof-of-stake ecosystem. It is developed on the basis of peer-reviewed research and ADA is its prime governance token. In mid-February, it was observed that the ADA was going fundamentally stronger with some intermittent price adjustments. 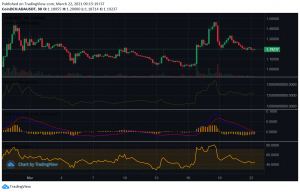 Currently, ADA is trading at $1.19. The price has increased from the opening price of $1.18. Thus, the market looks healthy.

The A/D indicator has been volatile in the past 24 hours. It started rising in the morning but has started falling again. Thus, whale distribution is higher than whale accumulation. Hence, we can expect a price pullback.

The MACD and signal lines are positive. Thus, the overall market momentum is bullish. Moreover, the bullish crossover by the MACD line over the signal line gives further credence to a price rise. Hence, we can expect the ADA price to go up further.

Currently, the RSI indicator is at 54%. It was in the ‘overbought’ region an hour before. Thereafter, it fell to the current level. Thus, selling pressures are slowly building up. Hence, a price pullback may be on the horizon.

Currently, the price is above the Fibonacci pivot point of $1.19. As the market momentum is still positive, in some time, we can expect the price to surpass the first Fibonacci pivot resistance level of $1.21.

The past 24-hour price chart shows a bearish trend. Thus, if by the end of the day, the price does not test and break out of the 76.4% FIB retracement level of $1.20, then probably a downtrend has set in. Consequently, we may expect the bear-run to continue tomorrow as well.