2020 has brought a number of challenges. Whether you look at the trembling stock market or the continued uncertainty around the globe. The global pandemic has upheaval the global economy, lives, and health at many levels. Fortunately, people who are associated with crypto-space, know that Bitcoin has shown approximately 213.56% return in a short span of ten months from March to December in the pandemic year.

If we look in a long-term frame, then there is a long path of the price that follows Bitcoin reaching near $500,000 in the next decade. And with the level of adoption that Bitcoin shows, hitting $100,000 in the next 12 months is quite significantly possible.

Bitcoin Adoption and the Birth of Safe Asset

Undoubtedly, Bitcoin adoption has multiplied a thousand times. And it has now been considered the safest asset in the digital world. The best example that explains the massive adoption of Bitcoin as their primary treasury reserve asset is by MS Treasury. It is one of the largest publicly traded business intelligence companies which had purchased 21,454 bitcoins worth $250 million in August 2020. Also, on 5th December 2020, MicroStrategy had made another payment of $50 million in cash to buy 2,574 bitcoins more. Recently, on December 21, 2020, it has purchased an additional 29,646 bitcoins, worth nearly $650 million from all the proceeds of its senior convertible notes. 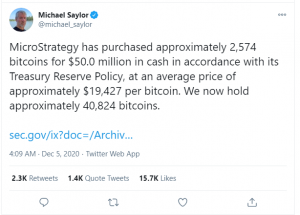 Clearly, this huge investment in the digital currency marks its adoption and trust in the crypto world.

Another positive remark on Bitcoin made by Rick Raider, the chief investment officer of BlackRock, reads:

“I think cryptocurrencies are here to stay”

Institutional investors are grabbing every opportunity to get a hold of the digital asset. BlackRock, the world’s largest asset manager with more than $7.4 trillion in assets, is into the adoption of Bitcoin. Another more trusted authority on BTC is Grayscale Investments, which added another 12,000 BTC to its Grayscale Bitcoin Trust on Dec 22, 2020. 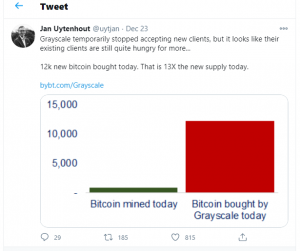 In a world full of uncertainties, the investment in Bitcoin gives confidence and clarity to see that the centralized systems have flaws which these digital currencies can ultimately empower. The statements from personalities, who have changed their outlook, such as Jay Clayton, Warren Buffet, and Peter Schiff have observed the insufficiencies of the centralized system.

Also, multiple governments have now taken a soft side with regards to accepting these digital assets. Moreover, It will be interesting to see what the new White House will take in terms of the crypto-space. In the case of India, the take of the Supreme Court cleared people’s mindset on these crypto assets. For sure, the verdict has eased the mind to invest in Bitcoin.

In another news report from Bloomberg, Tim Draper, the venture capitalist, has accepted the importance of the adoption of Bitcoin and believed it to be a far better option than any alternatives.

I look forward to seeing a world that is in continued acceptance of the Bitcoin ecosystem and feel proud and excited to be a part of it.

Since its inception, Bitcoin has marked a special place in the wallets of investors. It is observed that during the initial stages, Bitcoin was under the collectible phase for the first 9-10 years. But now it has become a store of value - after 2019 to be specific. There are no technical reasons apart from the adoption of BTC on a global scale, which proves it reaching $100k in 2021.

The foremost thing that comes to mind while talking about BTC is the comparison of BTC and gold. The all-time favorite comparison and long-standing argument that Bitcoin will catch-up to gold is evergreen. Let us see that first.

The current market cap of gold is around $10 trillion, which is On and Off 2% of the total global wealth. Now assuming that this 2% i.e. $10 trillion flows into the BTC investments then in rough approximation BTC will be approximately $500k.

Looking at the Global Scenario

Apart from the calculations based on the mere comparison, it is observed that the predictions of BTC reaching $100k is based on the research data in published reports.

According to the Capgemini global health and wellness digital framework report, the HNWI stood at $74 trillion by the end of 2019. Now if we assume only 2% to 3% of wealth is pushed into investing for the digital currency, the total worth calculates to be $2.22 trillion. 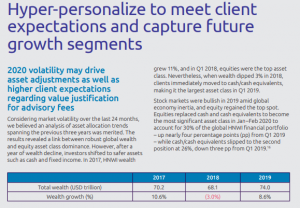 Dividing this potential value with the maximum supply of Bitcoin will conclude the price range of BTC from $70,000 to $105,000 this year.

This global High Net Worth Individual (HNWI) allocation then gives a clear picture of how Bitcoin reaching $100,000 is not just a speculation but a prediction based on real grounds.

So, here’s why I believe Bitcoin will soar up to $100,000 this year. Let me know your take in the comments below.