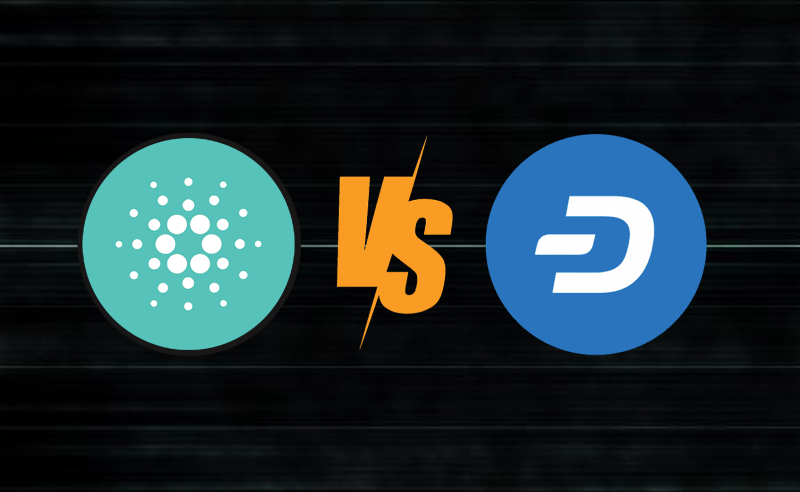 Cardano Vs Dash ; Which One’s A Better Investment Option?

If you are also confused among Cardano vs Dash and not able to decide where to put your money, then you’ve come to the right page. Here, we will help you make your decision by providing you with the details of both the projects, their similarities and differences. However, we suggest instead of putting your money in a single asset, you consider investing in a few altcoins. You can invest both in Cardano and Dash and even more of other top altcoins if you want. Let’s start with knowing both the altcoins separately.

What is Cardano (ADA)?

Listed among the top 20 cryptocurrencies Cardano allows the development of dApps and smart contracts on its platform, just like Ethereum. The native currency of Cardano, ADA can be used to develop such apps and contract and also for sending and receiving funds. The blockchain platform was developed by Charles Hoskinson, one of the co-founders of Etherreum.

According to Charles Hoskinson, the motive behind the making of Cardano is to bring a new decentralized blockchain platform in existence that works much better than the older platforms like Ethereum. Hoskinson claims Cardano to be the third generation blockchain which was created differently than the first and second blockchain (Bitcoin and Ethereum).

The smart contracts and decentralized apps developed on the platfrom is validated by the community involved in the blockchain. The project collected more than $63 million in its initial coin offering.

What is Dash (DASH)?

READ  Is Cryptocurrency There to Spend Money or to Save Money?

As mentioned on the official website of the dash, it facilitates faster and secure payments with almost no fees. The crypto coin aims to provide financial freedom to the world with its fully-decentralized payment network. Dash makes it easy to purchase goods as well as services all around the world instantaneously. It is the only cryptocurrency that supports innovative features such as Masternodes, InstantSend, Chainlocks and PrivateSend which makes it unique and worthy of investing.

Cardano vs Dash, which altcoin can offer you the most return? Well, it’s a tricky question and only you can decide it. Although we can help you trace the roadmaps of both the cryptocurrencies so that you won’t put your money on the wrong asset.

While Cardano is focussing on the biggest problem of the blockchain technology which is scalability, Dash is seen to provide real-case values in economic crisis.

Is Cardano A Good Investment?

Cardano aims to bring banking to the people that currently don’t have access to it by increasing the traffic on its network which is only possible by increasing scalability. To eliminate the issue of scalability, Cardano team has already started working towards sharding and parallel chains. Cardano is also focussing on expanding ADA payments worldwide by creating incentives for the network.

Is Dash A Good Investment?

READ  Bluzelle: An Airbnb for the Decentralized Databases

Dash has been working with Venezuela to help them come over hyperinflation which it is suffering from 2014. By providing Venezuelans with a reliable medium of exchange and stores of value, Dash aims to help recover the value of plummeted Venezuelan bolívar (VEF).

Following its success in Venezuela, Ryan Taylor the CEO of Dash commented that the platform is focussing on the areas and industries where the usage of cash and credit cards have high inflation rates. Cryptocurrency like Dash can offer such countries and regions with the most benefit which is one of the reasons for Dash’s mass acceptance.

Dash is among those top cryptocurrency which actually set an example and proved to be beneficial in the real economy beyond trading.

Difference Between Cardano And Dash

The main difference between Cardano and Dash is the consensus and algorithm used. While Dash uses the older proof of work consensus and has similarities to bitcoin, Cardano is based on the new proof-of-stake Ouroborus algorithm which claims to be the third generation of the blockchain. Dash was created by forking Bitcoin’s blockchain with many improvements and unique features. However, there are differences between the leading cryptocurrency, Bitcoin and Dash in terms that Dash uses a proof-of-work hybrid consensus algorithm. Dash features instant and private payments by utilizing Masternodes, which is one of the best things about this cryptocurrency.
Coming to Cardano, which operates on the new Ouroborus algorithm, needs less energy eliminating the issue of broader scalability of the blockchain. The algorithm used in the cryptocurrency is one of the significant innovation in blockchain technology. It is furthermore, the first proof of stake protocol that has been proven mathematically secure as well as reviewed by peers after its launch. The cryptocurrency claims its protocol to be as reliable as Bitcoin, which can never be compromised.

We hope you’ve found your answer which is worth investing from Cardano vs Dash. However, if you are still confused, read more of our guides that tell you about the best altcoins to invest. Once, you decide to go on with a particular asset, make sure you know all the needed knowledge about where to buy altcoin, where to store altcoins as well as how to keep your altcoins safe. Don’t worry if you are not aware of all the processes and just visit cryptoknowmics.com and read our self-help guides for help.