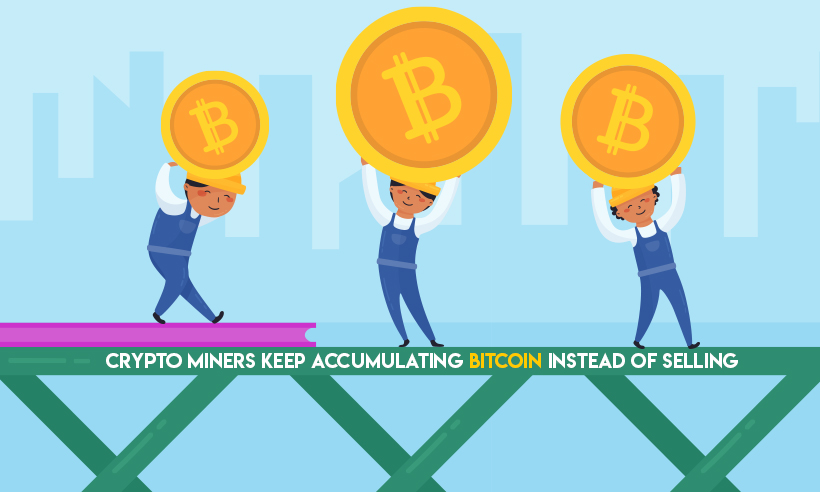 Crypto miners are increasingly accumulating their Bitcoin stashes instead of storing them. Data from Glassnode indicates that the Bitcoin Miner Position indicator has turned positive. Over 8,874 units of BTC have been added by miners in their long-term positions.

Lex Moskovski, the CIO of Moskovski Capital has shared on Twitter that shows that crypto miners are accumulating Bitcoin instead of selling it. Just last week, miners added $523,647,640 worth of Bitcoin to their stashes amounting to a total of 8,874 BTC.

Miners now are not in a rush to part with their Bitcoins and prefer to accumulate them after selling the cryptocurrency for around two months in a row.

Glassnode also pointed out that for the first time since December 27, the Miner Net Positive indicator has turned positive.

Over the past few months, the crypto market had been selling much of its supply in BTC, increasing the selling pressure in the market. Since late March and early April, miners bought around 10,000 BTC.

China is dominating the global cryptocurrency market with miners in the country accounting for more than 50% of the global hash rate.

Despite the regulatory and energy-related challenges, the Bitcoin mining business continues to flourish in the country. Recent data indicates that the Chinese Bitcoin miners are increasingly accumulating their BTC instead of selling them during the price crash.

Bitcoin mining revenues have recorded over $1.5 billion in Bitcoin block rewards and fees last month, according to a recent report from blockchain analytics company Arcane Research.

Though mining revenue decreased toward the end of the previous month as trading volume settled down, the monthly account still constituted a record.

In mid-March, blockchain data firm Glassnode reported that miners were earning over $52.3 million per day. Meanwhile, revenue reached a record $64.7 million on March 14, the day after Bitcoin’s price peaked at its new all-time high over $61,000.