Polkadot Giving Ethereum a Run for Its Money

2020 gave a lot to the world of Decentralized Finance or the DeFi Industry. With business going decentralized, the industry had a remarkable success during the pandemic year. The amount of value locked in DeFi applications surpassed $37.99 billion at the beginning of 2021. The industry is still on an upward trajectory. Decentralized Finance is now the go-to word of the crypto and blockchain industries. 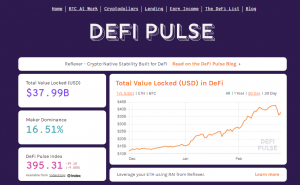 What Is the Polkadot (DOT)?

Polkadot is the 6th-largest cryptocurrency today. It is one of the best-emerging cryptocurrencies and the best alternatives to Bitcoin today, with a price of $32.62 and a market cap of $29 billion (at the time of writing). 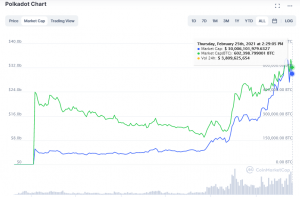 Polkadot can be defined as a next-generation blockchain protocol connecting more than one specialized blockchains into one unified network. Every blockchain that connects with Polkadot works in parallel with the so-called “parachains.”

Polkadot is gaining a lot of popularity over the past few years as Polkadot aims to create an internet of interoperable blockchains for a decentralized web. This Interpol ability simplifies the creation of new applications, institutions, and services.

Polkadot Holding the Potential to be the Next Ethereum

The DeFi business is growing. And as it grows, investors are looking up to Polkadot to be the next Ethereum. Gavin Wood, the co-founder of Polkadot, wrote the Polkadot project just a year after Ethereum was launched. A lot of savvy digital-asset investors are moving towards new blockchain projects that could potentially grab market share from the Ethereum network.

Polkadot went live on crypto exchanges in August 2020. Even though it had slight turbulence, in the beginning, it was up over 44% by November. On the other hand, Ethereum has climbed a bit over 8% at that time.

“The market and investor appetite has been really strong for Polkadot’s DOT token. An initial valuation from a pre-network launch fundraising was priced around $3, he said. “So to consistently trade above $4 since then has been really encouraging.”

The Matic Network, a project developing an Ethereum-based layer-two solution and an independent proof-of-stake blockchain, announced in the first week of February that it would rebrand to Polygon. The aim here for Polygon is to support Ethereum’s scalability solutions.

After the news came out, Sandeep Nailwal, co-founder of Matic and Polygon said,

“...some of the advisors described Polygon’s approach as a kind of “Polkadot on Ethereum,” which is not an official tagline adopted by the team but still offers an “easier to understand narrative for the community.”

The Matic Network is hoping that this shift towards creating a multichain system will help Ethereum to beat off competition from Polkadot.

DeFi Branching Its Way to Polkadot

Traders complain that it costs a lot to swap assets on the Ethereum blockchain platform. This has made Money market Equilibrium to build a cross-chain implementation of Curve Finance on its Polkadot parachain. After it is done, the automated market maker will exist both on Ethereum and Polkadot. Curve Finance CEO Michael Egorov said:

Polkadot Still Has a Long Way to Go

Ethereum stands as the most trusted blockchain project today as most of the Dapps are launched on it. And only recently Ethereum broke its ATH and took its price above $1,800. Moreover, the launch of Ethereum futures will also show a more bullish trend for the second-largest cryptocurrency. Therefore, even though Polkadot is probably on the highway to a better life, it still has a long way to go to beat Ethereum.