The year is so far very volatile for the crypto space. The prices have shown a lot of ups and downs for various reasons. Furthermore, cryptocurrencies such as Bitcoin and Ethereum have seen massive losses this week, but some crypto experts argue that such volatility is to be expected from such a speculative asset class which has already seen a massive price increase in such a short period.

And when we talk about crypto tokens that have shown significant growth this year, then SHIBA INU has been in the news every day. The token that started as a joke has shown exponential growth this year. Moreover, the popularity of the token over the past few months has been impeccable, and now it is being even regarded as the Dogecoin alternative. Shiba Inu was almost unknown until about a year ago until retail and Twitter lurkers discovered it as a second chance for making a profit after Dogecoin's tremendous success. Many investors missed Dogecoin's 13,000% price increase in the last five months, and they now expect Shiba Inu to follow suit, given the current headlines and exchange listings.

The Growth of Shiba Inu

This new cryptocurrency has shown an increase in price and attention that cannot be avoided. Some part of Dogecoin’s market share has already been taken over by SHIB. Furthermore, because its logo is a Shiba Inu dog breed, the cryptocurrency has been dubbed the "DOGE killer." Within the SHIBA INU ecosystem, SHIB is a decentralized, spontaneous community-building experiment.

Shiba Inu, the "Dogecoin Killer," has become the cryptocurrency market's flavor of the season. It gains a lot of attention and establishes itself as a popular choice among investors, particularly in the wake of the current bear market. 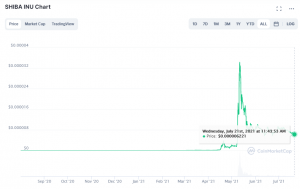 Elon Musk, the CEO of Tesla, appears to have moved on from his infatuation with Dogecoin and discovered a new obsession. Last weekend, he declared that his Shiba Inu would be named ‘Floki.’ The Musk Effect kicked in shortly after the tweet in the last week of June, and Shiba Inu coin values jumped 16% to $0.00000790 on CoinMarketCap, according to CNBC.

So, if you’re thinking about investing in Shiba INU Token, understanding what others have to say about it can be useful information. This article will give you a quick overview of the Shiba Token price forecast for 2021 and beyond (up to 2025). The purpose is to help you decide whether SHIBA Token is a good investment.

What Is Shiba INU?

SHIB is the “DOGECOIN KILLER,” according to the SHIBA INU website, and will be listed on ShibaSwap, its own decentralized exchange.

The Shiba Inu coin was established under the pseudonym "Ryoshi" in August 2020. The charm of the meme coin, combined with articles and Tweets from celebrities like Elon Musk and Vitalik Buterin, drew in a community of investors, quickly improving its speed and value.

Shiba Inu was created as an Ethereum-based alternative to Dogecoin's Srypt mining method. Baby Dogecoin (BabyDoge), Dogecoin (DOGE), JINDO INU (JIND), Alaska Inu (LAS), and Alaskan Malamute Token are among a swarm of dog-themed cryptocurrencies (LASM). Investors who missed the Dogecoin boom from 0.0002 USD to roughly 0.75 USD have flocked to these lower-valued currencies.

Many factors drive the price of Shiba INU and fortunately, most of them take the token price to a bullish level. The Shiba Inu dubbed “Dogecoin Killer,” has become the rage in the cryptocurrency market, attracting a large number of new investors. The recent crypto meltdown simply served to enhance Bitcoin and Ethereum's worth.

Since June, the Shiba Inu price has been trending lower in a declining channel, resulting in a 40% drop in SHIB. Despite the sluggishness, the volume backing the declining channel has been low, indicating that investors are not in a hurry to depart the coin.

Shiba Inu is getting a new dedicated exchange — ShibaSwap. A new decentralized cryptocurrency exchange (DEX) similar to UniSwap or PancakeSwap, which will be more of a coin exchange. Although the platform is operational for several weeks, it is currently being reviewed to assure total security and transparency.

SHIB is mentioned on 1000+ crypto social media channels, including Telegram groups, crypto subreddits, discord groups, and private trading conversations, according to the Santiment Social Volume indicator. The number of people using social media dropped dramatically after the May crash, but it is currently leveling off, demonstrating that it has retained its popularity despite a 40% drop.

The performance of the token has been quite impressive this year so far, despite the deep crypto market correction. The token started the year with $0 billion that went on to $13 billion. This kind of growth is a clear indication that the coin has some serious growth potential. Shiba Inu's price has increased by more than 60% since its local bottom on June 22, according to FXStreet. On the 12-hour chart, it has been stuck in a descending triangle formation since May 19, as SHIB bulls have been unable to push prices higher against the seller's dominating distribution.

The advent of Shibaswap, a decentralized exchange, sparked a lot of anticipation. Many crypto aficionados dismissed it as a rumor, while others questioned its validity. Fake websites appeared in an attempt to influence the SHIB price. Moreover, at the time of the debut, it was expected that there would be a significant increase.

Its price rose above $0.000009 shortly after introduction, however, it quickly lost that position. The price is rejecting again at current levels, but the positive trend remains intact. As a result, a return to these levels is very likely shortly.

You can make a pretty accurate Shiba Inu price prediction for 3, 6, and 12 months ahead of time by using support/resistance, trendlines, moving averages, and simple indicators like the RSI. In the coming months, we believe the price will be somewhere between $0.0000500 and $0.0000800.

As the Team continues to develop its products and those products acquire adoption from the intended audience, we expect the price of SHIB will fluctuate between $0.0002000 and $0.0005000 between 2022 and 2025. This SHIB price forecast is based on various data sets and predictive modeling, with the assumption that the present long-term trend that drives the price of SHIB continues upwards with no notable setbacks.

Most of the price predictions for the Shiba INU token in the market are positive. This goes without saying that the token expects to give traders good returns once the market goes back to being bullish. Given below are some of them. We are listing them down for you so that you can have views from every side.

They believe that related market sectors were quite popular in the given time frame since Shiba Inu has been displaying a rising trend. Their website employs a unique Deep Learning-based algorithm to assist customers in determining whether SHIB is a good future portfolio addition. These forecasts take into account a variety of factors, including volume changes, price changes, market cycles, and comparable currencies. According to their prediction algorithm, the asset's future price will be $1.6E-5 (166.667%) after a year.

The crypto space is indeed going through a serious correction at this moment, and investing your money now might look like a great risk. However, the market expects to perform this way. The crypto space is volatile, and it is nothing new that the prices show unexpected ups and downs. Therefore, it is only a matter of time till the market bounces back to its bullish sentiments.

If you are thinking of buying Shiba Inu at the best price, then 2021 is the best year to do so, as the SHIB price has been increasing from the very beginning of 2021 and is currently under consolidation. Moreover, it is expected to continue rising until it reaches $1. So now is the best moment to invest in Shiba Inu tokens. However, do your research before you put your money into any cryptocurrency. Besides, when you look for a price prediction for the short or long term, considering both technical and fundamental analysis into account is of utmost importance.