Why India Shouldn’t Ban Crypto, And How It Logically Can’t!

The more I think about Satoshi, the more I love them. And the news of Tesla’s $1.5 billion bitcoin investment that has reportedly made more profits than their annual car sales is strongly exhorting to all investors [including me]. The trillion-dollar industry has shown fortune that not even the biggest tech-giants achieved decades back.

At the same time, how can we bypass the big headline of the Indian government banning crypto? Clearly, the only reason behind the plan to ban crypto is to ensure the authority of the government. The government would not have jurisdiction over crypto-transactions between two entities.

But, do you think banning crypto can ever solve the problem for any country? It would rather lead to the social, economic, and political pulverization of the country. Clearly, countries don’t ban bitcoin, they are banning themselves from the network and eventually from the development.

JPMorgan Chase & Co. recently tested the potential of the blockchain network that could even power the payment transactions between Earth-orbiting satellites, conveying the message that decentralized technology is not limited to mere crypto-transactions.

We all know about the revolution blockchain technology has brought. Increased efficiency, high transparency, utmost security, improved traceability, etc. are some of its prime advantages. The greatly evolved decentralized system is making high revenue every year. The report by CoinMarketCap states that DeFi protocols have reported monthly high revenues. The data records a 14.4% increase compared with January’s revenue of $149.9 million, resulting in $171.5 million in DeFi revenue. 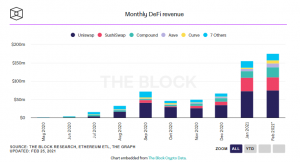 The decentralizing capability that the crypto industry holds will be an opportunity for the nations to tune with the latest technology. Taking advantage of the technology is the need of time, lest the nation will become incongruent with international growth prospects.

How Common Is Crypto?

“Trust is what moves economic transactions, and it’s what moves the relationship between the citizens and their government,” said Jordi Puigneró, Minister of Digital Policies and Public Administration of Catalonia. According to him, blockchain technology provides an opportunity to establish self-sovereignty. Moreover, digital identity is important for people to handle better data privacy.

Undeniably, cryptocurrency has now become the most popular and cheaper solution to send money across the board. Here is the data showing the percentage of the population who used or owned the digital assets. 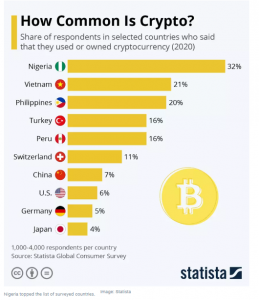 Elon Musk, Bill Gates, Brian Armstrong, and JPMorgan & Chase are some big names of the industry that are influencing people to invest. The continuous investment made by tech-giants like Grayscale, MicroStrategy, Square, etc. is influencing investors to turn towards the crypto-space.

Indian government should strive towards the adoption of open-source software in e-governance systems. Since blockchain technology is not only open source but open state and open execution, it becomes different from centralized platforms like Twitter, Instagram, etc.

The adoption of open-source software lets users view data on the blockchain and helps establish transparent order of data. In terms of security and trust issues, blockchain technology accounts for all answers. To succeed in hacking the blockchain, one needs to alter 51% of copies on the chain. Since the Blockchain network is vast enough, the cost of pulling off such a feat would be exorbitant. Also, practically it won’t be possible for the hacker to control 51% of the computing power in the blockchain network.

India has always stood for basic human values such as free speech, equality, freedom of expression, and assimilation of human rights. Although, India is yet to qualify as a major economic powerhouse, but has immense potential for digital transformation, which is surely going to pay the nation back.

The recent news of MicroStrategy buying in the biggest dip has made another big news in the crypto-community. CEO Micheal Saylor announcing the purchase of 19,453 BTCs proved their trust in the digital assets.

Another news that came in just another 24 hours is about the purchase of 3,318 BTCs by Square. Making the total purchase of $50 million BTCs. Similarly, the total Bitcoin purchased by Grayscale counts to 90,531.

Apart from the crypto-whales, even small investors have thousands of dollars invested in crypto-assets. One can analyze the trust investors have in crypto by checking the market capitalization, which is over $1 trillion. Moreover, it is just the beginning of 2021!

These resourceful, connected, and internationally influential people have supported cryptocurrency for many years and have dedicated themselves to the crypto space for quite a long time. A cryptographically proven finance system will raise foreign investments, which will ensure more economic development in the country. Attracting crypto-capital will attract foreign investors and encourage the development of decentralized protocols for investors worldwide.

If India backs this digital technology, the blueprints of economic growth will set an example worldwide, either as services that others can look forward to or a system that other countries can emulate going into the future.

Wait before taking the statement onto ego! There are some valid grounds due to which it is practically infeasible to ban crypto. Considering the depth of internet applications, when the Indian government thinks of banning crypto, technical, social, and political grounds stand as obstacles in the way. Let’s discuss each of them in detail.

Technically, banning crypto means doing away with mathematics and science. The play of machinery and technology has made the complete system in such a way that the crypto space is standing exclusive. To understand the technical limitations a nation may face, let’s discuss the basics of how the crypto-transaction works.

To access your Bitcoin you should have the ‘passphrase,’ which is a string of words. However, if you lose or forget it anyhow, it becomes impossible to reset. This means that you will lose your bitcoin completely. And no one can access it by any means.

Now, what you can do is - store that passphrase either online or offline. Having said that, one can now realize how hard it is to ban Bitcoin in the sense of seizing BTC from individuals since banning crypto means not allowing them to access their passphrase which is literally impossible!

Since Bitcoin blockchain is cryptographically shielded against any attempt to create new currency, rewrite transaction history, or change account balances. It is almost impossible to attack the network.

The cryptocurrency industry is just like a universe comprising of different cryptocurrencies. Bitcoin is just one, there are thousands more. How is it even possible that all the cryptocurrencies are gonna fail in the same way? They work on different algorithms. We don’t have a technology that promises to seize such attempts. Therefore, all these reasons make it quite difficult to entirely ban or stop crypto transactions.

In social terms, banning crypto means welcoming social outrage. Bitcoin is probably one of the most favorite words among institutional and retail investors. With the support of over 100 million people which includes, billionaires, CEOs, cryptographers, engineers, founders, entrepreneurs, venture capitalists, and angel investors, Bitcoin has become the token of success.

The news of Tesla purchases $1.5 billion in Bitcoin stating that “the purchase will add more flexibility to further diversify and maximize return.” Tesla also claimed to accept payments in Bitcoins in exchange for its products, making Tesla the first automaker to do so.

Another example of the four big accounting firms - Deloitte, PwC, KPMG, and EY using technologies to help clients maintain immutable records of money paid hints at the true capability of the technology. On one side, PricewaterhouseCoopers is currently supporting clients by transacting in Bitcoin and altcoins. Deloitte is steadily integrating the technology in their side operations, such that employees in Luxembourg are paying their canteen bills in Bitcoin.

Undeniably, cryptocurrencies have now become an indispensable part of the assets they own, banning crypto in one country will surely result in the reconsideration of investors to another domicile. Moreover, Indians who have invested heavily in cryptocurrencies will try to move out of the country to secure their crypto assets.

Declaring crypto illegal in India directly means you are restraining countries where it is legal. With the growing demand for internationalizing currencies, banning crypto will not favor the economic growth of the nation.

A recent example of Nigeria’s protest against banning crypto has started hashtag #WeWantOurCryptoBack on social media. The movement highlighted the anti-youth agenda of the government. 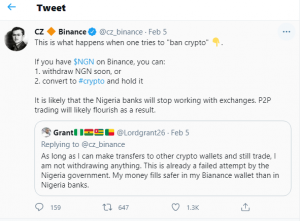 However, now the situation is - the Governor of the Central Bank of Nigeria (CBN) and Security and Exchange Commission (SEC) are summoned by the Senate’s upper chamber.

“Part of the desire of the SEC even in the future is to provide a regulatory framework that will take care of all these challenges that we have seen internationally and the entire world is grappling with in terms of cryptocurrency and digital assets. For us at the SEC and capital market, it is something to look at, the world cannot be moving forward, and we will be static, no,” said Timi Agama, HOD Registration, Exchanges, Market Infrastructure, and Innovation Department of SEC.

The essence is, the ban won’t apply beyond borders. In the coming years, millions of people will adopt digital currencies worldwide. No matter if they belong to India or not! This means it will restrict Indians from entering the global monetary competition.

Hopefully, the question of why India should not ban crypto and why it actually can’t is clear. Long story short, if India chooses to ban rather than adopting Crypto, it will take the nation years back.

The wiser choice will be working on details of how liberalizing foreign exchange is possible. Regulation of crypto-assets can be the only way out.

Already in history, India has moved from FERA to FEMA. On one hand, where the Foreign Exchange Regulation Act (FERA) imposes strict regulations on certain kinds of payments, dealing in securities and foreign exchanges, import, and export of currencies. Foreign Exchange Management Act (FEMA) optimizes the external trade and payments, maintaining the foreign exchange market in India. So, this time it is not about the foundational shift from regulation to management, but a Crypto Ban to Crypto Boon.

The shift is from a closed to an open system, leading to a GDP growth rate of 9.6% in 2006. We cannot say the history is repeating itself, but for sure it is rhyming.