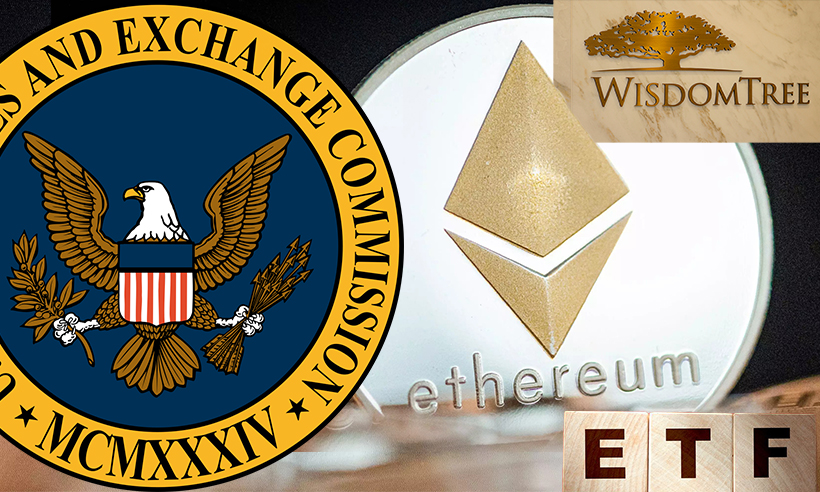 Wisdomtree Files With the SEC for an Ethereum ETF

Wisdomtree Asset Management filed for an Ethereum exchange-traded fund (ETF) with the Securities and Exchange Commission (SEC) continues to consider its Bitcoin ETF application from earlier this year.

Wisdomtree Files for an Ethereum ETF

The move coincides with Ethereum’s rising popularity. Institutions are now taking notice of Ethereum, which has a significantly wider use-case than its older, bigger equivalent in Bitcoin. It’s also worth noting, before May’s flash meltdown, Ethereum was beating Bitcoin by a large margin.

If authorized, Wisdomtree’s Ethereum ETF would become the second exchange-traded fund in the United States, following VaNeck’s. This would allow regular stock market investors to obtain exposure to Ethereum without actually acquiring the cryptocurrency.

According to the prospectus, Ethereum is a “digital asset that ain’t issued by any government, bank, or central entity, and is the second-largest cryptocurrency by market capitalization behind Bitcoin.”

“Gain exposure to the price of ether while incurring less cost and liabilities from the Trust’s operations.” To achieve its investment goal, the Trust will hold ether and value its Shares daily based on the [CF Ether-Dollar US Settlement Price], which is an independently computed value based on an aggregate of executed transaction volume from major ether spot exchanges.”

Emerging Growth Will Drive Ethereum Trust Reporting to the Company

According to Wisdomtree’s S-1 filing on Thursday, the ether trust will qualify as an “emerging growth business,” allowing it to take advantage of the JOBS Act’s lower reporting requirements.

For example, unless the SEC disapproves, the trust is not required to produce an auditor’s attestation report or follow Public Company Accounting Oversight Board recommendations from 2012.

According to Wisdomtree’s Ether ETF registration, “the Trust will cease to be an ‘emerging growth firm’ if it has $1.0 billion or more in annual revenues.”