Ripple is a blockchain technology-based open-source protocol that facilitates fast and secure digital payments. XRP is the native token of this network. As per recent news, the ether rally has positively impacted the XRP price. The price registered the highest jump in the last 3 years. The following XRP technical analysis will determine the performance for the next two days. 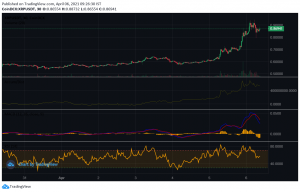 Currently, XRP is trading at $0.87. The price has dropped from the opening price of $0.91. Thus, the market looks bearish.

The A/D indicator is falling gradually. Thus, the whale distributions are higher than the whale accumulations. Selling pressures are pretty strong. Thus, we can expect the price to go down further.

The MACD and signal lines are negative. Thus, the overall market momentum is bearish. A bullish crossover by the MACD line over the signal line has occurred. Thus, we can expect some price corrections amidst a falling price trend.

Currently, the RSI indicator is at 51%. It faced rejection at 56% and started falling. Thus, selling pressures are high. The market is not healthy, and we can expect the price to decline further.

The price has tested and fallen below the 23.6% FIB retracement level of $0.87. If by day close, the price does not retest and break out of this level, then probably a trend reversal has occurred. In that case, we can expect the bearish momentum to continue tomorrow as well.