How XRP Has Been Moving

It received a major push on January 30 by 85% as the pump and dump groups on Telegram and the WallStreetBets group showed keen chatter for purchase. The price zoomed to $0.75 and has since been on a rollicking high. The last 24-hour change saw a 13% increment in the prices. However, post this the price has also steadily declined on February 2 to $0.39 and $0.37 on February 3. February 4  onwards started seeing a spike from $0.388 to $0.46 today.

Why XRP Is Moving Up?

The prices have been showing an ascending wedge in an hourly price with the tightening of movement happening at $0.44. Since last week, the number of holders and volumes of trading has risen dramatically 16 times. However, one needs to be mindful of the pump and dump happening across currencies and this could be a major reason. 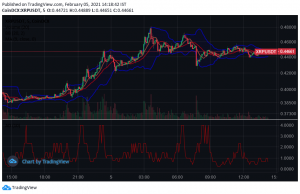 There are no strong reasons to uphold this price rise and one needs to track the social sentiments and if more pumping activity ensues in traders should look at a suitable exit point. The volatility index for XRP as per various indices is high. One needs to be careful while trying to buy in such a market frenzy. XRP is currently the fourth-largest by market capitalization with a $19,730,446,956 value. The currency has been reeling with pressure from a lawsuit by users in Florida.

Ripple is facing a really hard time due to the lawsuit filed by the U.S. SEC. Due to this lawsuit, a lot of crypto exchanges have either delisted XRP or suspended trading for it. According to the SEC, XRP is a security, and Ripple is accused of offering illegal securities. However, the firm has claimed that XRP is not security rather a utility token that has wider reaches.